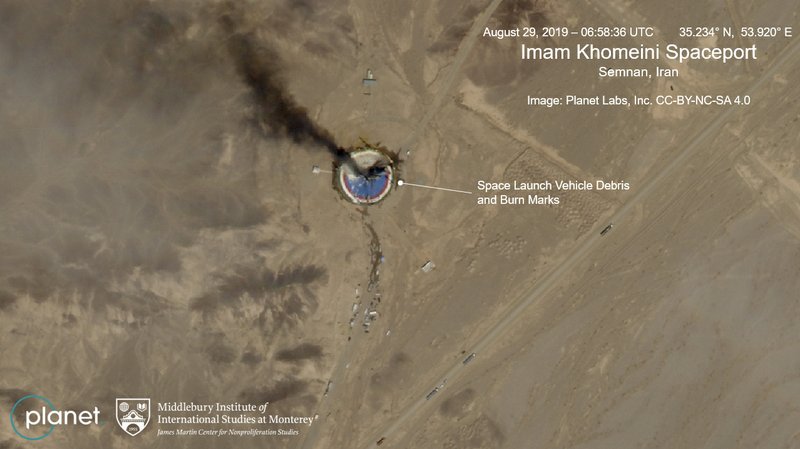 This satellite image from Planet Labs Inc., that has been annotated by experts at the James Martin Center for Nonproliferation Studies at Middlebury Institute of International Studies, shows a fire at a rocket launch pad at the Imam Khomeini Space Center in Iran's Semnan province, Thursday Aug. 29, 2019. The satellite image released Thursday shows the smoldering remains of a rocket at a Iran space center that was to conduct a U.S.-criticized satellite launch. (Planet Labs Inc, Middlebury Institute of International Studies via AP)

TEHRAN, Iran -- An Iranian official tweeted an image Saturday of a satellite after its failed launch from Iran's space center, responding to President Donald Trump's tweet of what appeared to be a classified surveillance photo of the aftermath of an explosion at the launch site.

The tweet from Iran's Information and Communications Technology Minister Mohammad Javad Azari Jahromi, including a selfie of him in front of the satellite, Nahid-1, comes as Tehran has yet to acknowledge Thursday's explosion at the Imam Khomeini Space Center.

While specifics about the incident remain unclear, it marked the third failure involving a launch at the center, which has raised suspicions of sabotage in Iran's space program. The U.S. has criticized the initiative as a way for Tehran to advance its ballistic missiles.

Trump directly acknowledged those suspicions in his tweet Friday and denied any U.S. involvement.

"The United States of America was not involved in the catastrophic accident during final launch preparations for the Safir SLV Launch at Semnan Launch Site One in Iran," Trump wrote, identifying the rocket used. "I wish Iran best wishes and good luck in determining what happened at Site One."

Jahromi, a rising politician in Iran's Shiite theocracy, responded to Trump in his tweet early Saturday.

"Me & Nahid I right now, Good Morning Donald Trump!" he wrote in English.

"I have no idea about the Semnan space center and the defense minister, who is in charge, should make a comment on this," Jahromi said, according to the state-run Islamic Republic News Agency.

The Semnan launching center is in a province neighboring the capital city, Tehran.

Commercially available satellite images by Planet Labs Inc. and Maxar Technologies showed a black plume of smoke rising above a launch pad Thursday, with what appeared to be the charred remains of a rocket and its launch stand. In previous days, satellite images had shown officials there repainted the launch pad blue.

The photo released Friday by Trump appeared to be a once-classified surveillance photo from American intelligence agencies. Analysts said the black rectangle in the photo's upper-left-hand corner likely covered up the photo's classification. Trump as president can declassify material.

The image showed damaged vehicles around the launch pad, as well as damage done to the rocket's launcher. It also clearly showed a large phrase written in Farsi on the pad: "National Product, National Power."

Jahromi said in July that Tehran planned three satellite launches this year, two for satellites that do remote-sensing work and another that handles communications.

The Nahid-1 is reportedly the telecommunication satellite. Nahid in Farsi means "Venus." The satellite, which had Iran's first foldable solar panels, was supposed to be in a low orbit around the Earth for some two-and-a-half months.

The semi-official Mehr news agency quoted Jahromi on Aug. 13 as saying that the Nahid-1 was ready to be delivered to Iran's Defense Ministry, signaling a launch date for the satellite likely loomed. Iran's National Week of Government, during which Tehran often inaugurates new projects, began Aug. 24.

The apparent failed rocket launch comes after two failed satellite launches of the Payam and Doosti in January and February, respectively. A separate fire at the Imam Khomeini Space Center in February also killed three researchers, authorities said at the time.

Over the past decade, Iran has sent several short-lived satellites into orbit and in 2013 launched a monkey into space.

Iran, which long has said it does not seek nuclear weapons, maintains its satellite launches and rocket tests do not have a military component. Tehran also says it hasn't violated the U.N. resolution as it only "called upon" Tehran not to conduct such tests.

The tests have taken on new importance to the U.S. amid the maximalist approach to Iran taken by the Trump administration. Tensions have been high between the countries since Trump unilaterally withdrew the U.S. from Iran's nuclear deal over a year ago and imposed sanctions, including on Iran's oil industry. Iran recently has begun to break the accord itself while trying to push Europe to help it sell oil abroad.