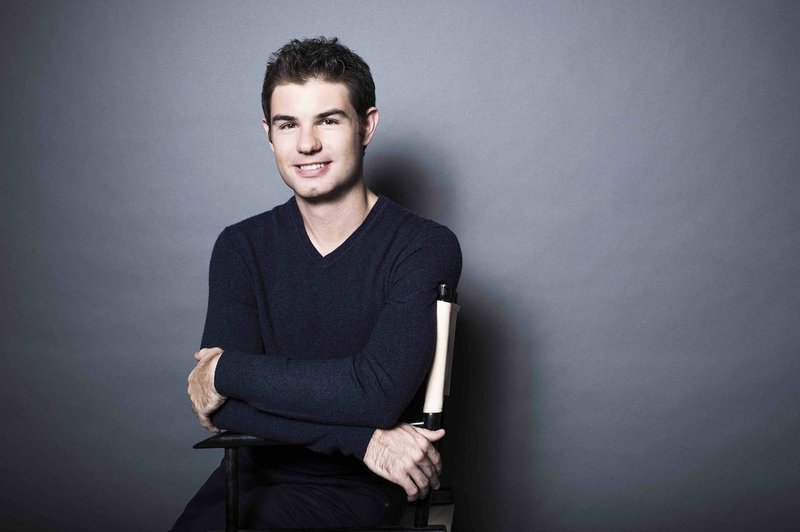 Photo by Dario Acosta Drew Petersen says the best part of his career has become "getting to work with new inspiring musicians and conductors on stage, getting to know them and the communities around them offstage, and eventually running into these new friends in unexpected places while touring."

Music director John Jeter has been with the Fort Smith Symphony for 23 years.

‘The Sounds of Joy’

To kick off the season, the Fort Smith Symphony will present a Sunset Symphony at Cobble Hill Hideaway, a fundraiser, at 7:30 p.m. Sept. 6.

This is the first event of its kind in Fort Smith, John Jeter says. The orchestra will perform outdoors next to the Arkansas River, presenting a program of classics, pops and film music and featuring soprano Nicole Van Every.

By every account, however, Drew Petersen has technical and emotional chops that belie his age. Music critics say he has "technique to spare," call his playing fearless yet subtle, clean and crisp, confident and assured. Jeter enthuses that Petersen is "a fantastic pianist whose sense of classical balance and romantic power make him ideal" for Mozart's Piano Concerto No. 2o in D Minor, which he'll perform with the orchestra Sept. 8.

The Mozart concerto joins Wagner's Siegfried Idyll and Beethoven's Symphony No. 7 on the program, and Jeter says they fit well together for the 100-plus professional musicians he leads.

"The Beethoven 7th has a special place in the composer's output because of a truly unique rhythmic emphasis," Jeter explains. "I thought it would be nice to showcase two other works that are unique in their respective composer's output. Mozart's Piano Concerto No. 20 in D Minor is the only one of his 27 piano concertos written in a minor key and as such, is the darkest and most romantic sounding of all his piano concertos. Wagner's Siegfried Idyll was written as a birthday gift for his wife Cosima and is the only piece of its kind by Wagner.

"Beethoven's 7th Symphony is a huge audience favorite that still resonates exceptionally well after an unbelievable 217 years," Jeter adds. "I love it when people say they love the oldies -- and they are talking about Elvis! Ha!"

Even though he's only 25, Petersen has a long history with music himself, he says.

"I grew up in Oradell, N.J., a small suburb of New York City," he begins. "We had an old upright piano in our home, and as I had loved all music since infancy and was naturally very inquisitive, the piano quickly became my favorite 'toy' in the house. As a toddler, picking out tunes at the keyboard and deciphering how to read the old sheet music in the fold-up bench became frequent activities for me. As my mom had studied piano as a child, she taught me what she could remember. But I still had many more questions that she couldn't answer, so my parents decided to get me lessons."

But Petersen wasn't just a musician.

"I can't say there was ever a clear other career path, but I did enjoy school as well as athletics as a child and teenager," he says. "I swam competitively through high school; that sport requires a similarly intense, sometimes maniacal self-discipline as performing music. Possibly more so, as you're always trying to beat the clock, which may be part of why I never dreamed of becoming the next Michael Phelps! Music demands intense preparation, but it also requires room to breathe, explore, create, re-create."

Petersen chose "a deliberately broad concentration, social studies," at Harvard "to keep room in my life for music while exploring all the university had to offer."

"Between the variety of classes I took there, a summer spent in Greece reading ancient and modern literature of the Eastern Mediterranean, and the professors and students I met with such diverse interests, I had lots of material to inspire me," he says. "I had thought perhaps if I were as passionate about any other area of inquiry besides music, I would pursue that and possibly seek a way to combine it with music. Though I am still insatiably curious about all kinds of subjects and ideas, I came to realize there was nothing that grabbed me as much as music."

While he loves traveling and playing the classics, Petersen says the best part of his career has become "getting to work with new inspiring musicians and conductors on stage, getting to know them and the communities around them offstage, and eventually running into these new friends in unexpected places while touring.

"The people make the places, that's for sure!"

Print Headline: A Prodigy At The Piano