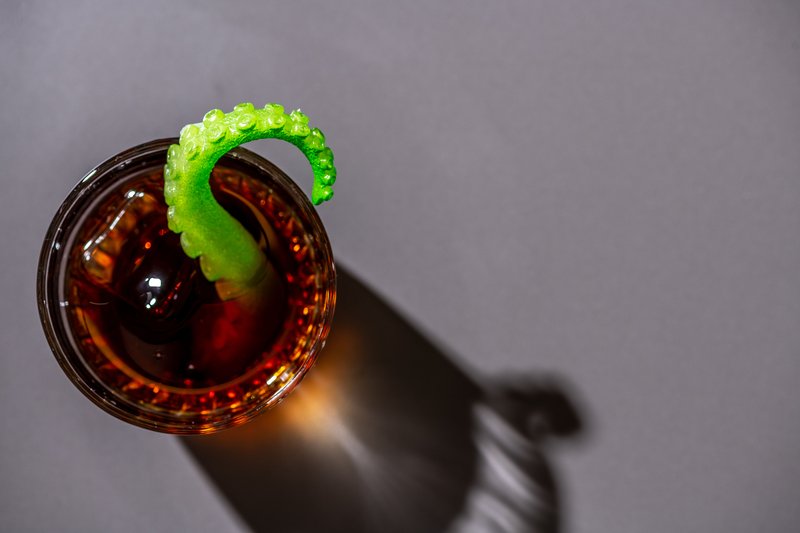 Around a month ago, when the "Sexy Mr. Rogers" costume began circulating on social media, I started thinking grimly about a theme for this year's Halloween drinks. "Burn it all down"? "Abandon all hope, ye who enter here"?

But then I thought: No! I will not allow some silly clickbait provocation to tarnish my enjoyment of the spooky season. There's enough of that already, after all: Every Halloween, I stumble across some commentary from mature, sophisticated types insisting the holiday is for children and only children. The complaints of these Citizen Killjoys range from indignant harrumphing about the occasional group of oddly tall, deep-voiced and sometimes bearded trick-or-treaters to eye-rolling about adults dressing up their pets or going to costume parties.

Honestly, why? Is it going to harm you if you give a fun-size Snickers to a 16-year-old? Is the sun going to fall from the sky because your 40-something colleague thinks it is hilarious to dress her cat up as Yoda? If she can do such a thing without traumatizing the cat, and without the cat tearing her face off in a fit of yowling feline pique, your colleague is probably a Jedi.

More importantly, Halloween provides one of the few moments post-puberty when one can still associate fear with fun. Once you hit a certain age, most scares come in the form of letters from the IRS, unexpected meeting invitations from HR, public speaking and medical procedures involving the flattening or scoping of body parts. Few of these terrors make for good costumes; fewer still invoke feelings of festivity.

Every Halloween, friends of ours put on a spectacle in their yard that may be singularly responsible for local decorative gourd shortages. Their yard has hosted a murderous pumpkin monster holding its own decapitated pumpkin head high. It has featured several multi-gourd centipedes, made up of dozens of tiny pumpkins snaking across the yard, culminating in a terrible pumpkin head rising off the lawn to snarl at passersby. There are a host of other chortling jack-o'-lanterns as well, usually including an enormous one shooting flames from the top of its roasting head, an effect created by soaking toilet paper rolls in kerosene. Days of labor and dozens of pumpkins of various shapes and sizes go into this production, which involves power tools, fire and, in recent years, a fog machine.

It warms the cockles of my heart to sit on their front steps on Halloween night and watch as trick-or-treaters come around the corner, see the yard and freak out, their little faces filling with awe, their eyes lit by dancing jack-o'-lantern flames. And the adults with them, many of them probably already exhausted from a day at work and dutifully chaperoning anyway, come around the corner and get the same look on their faces.

I try to play two small roles at these annual events: One, I help my friends make sure the various Princess Elsas, dragons, Pokémon and genies do not wander too close to a burning gourd. And two, I try to take a batch of Halloween cocktails and sometimes a punch, so that, along with the baskets of candy, we can offer some adult trick-or-treats as well. If you're hosting a fearsome fiesta this year -- one that distracts from the daily fearsome fiascoes on the front page of the paper -- here are some tips for making spooktacular cocktails.

Go forth and be creepy, my fellow adults, and here's hoping awful puns are the scariest thing you deal with this Halloween.

Go for the garnish gold. Nothing 'ween-ifies a basic drink like some creepy visuals (and nothing ends the fun as quickly as someone choking on one). With a drink like the Spooky Sour, you can keep to the basic recipe or add a little egg white if you want to create a frothy pale surface, allowing you to splatter Angostura bitters "blood" or create more intricate patterns using bitters delivered by eyedropper (Angostura and a few drops of black or red food coloring work well). If you add garnishes that aren't edible, make sure they're clean and noticeable and won't end up getting swallowed accidentally. And if you play around with dry ice, make sure whoever's handling it stays sober and attentive.

Shoot for seasonal service. For punches such as the Bob's Your Apple, thinly sliced rounds of fruit, sprigs of rosemary and thyme, and spices such as star anise and grated nutmeg contribute not only flavor but visual pleasures; they won't make your punch scary, per se, but they certainly make it seasonal. And having little baby apples to float in the punch will remind people of bobbing for apples without making them do it. (Seriously, when I think of how many times children of the '80s stuck their faces into tubs of water that had been snorted and slobbered in by 30 other kids ... it's a wonder any of us made it out of the Reagan era.)

Not only can you herald the autumn with garnishes, you can do it with the punch bowl itself. I find lots of cheap, old serving bowls at local thrift stores, but if you're feeling ambitious, you could serve a Halloween punch inside a hollowed-out pumpkin. Provided you scrape out the innards well, it won't affect the taste unpleasantly.

Satisfy the kid inside, and the adult they've become. It seems only natural for Halloween drinks to lean a little sweet -- a liquid treat for adults to enjoy while the kids plow through pounds of processed sugar. But most people's sweet teeth have evolved since they were kids, so keep your drinks balanced and bright. Stick to fresh fruit juices, and try to complement sweeter, richer flavors with tart or bitter ones (as in the Black Lagoon).

Remember: Angostura bitters is the pumpkin spice of cocktails. I mean that in the best way possible: The ubiquitous yellow-capped bottle is loaded with baking spice notes that turn a drink seasonal with just a dash.

Keep the candy corn as a garnish. I test these things so you don't have to, so I can confirm: It is possible to make a cocktail syrup by melting candy corn, but you'll get better results if you instead go with flavors reminiscent of this Halloween staple. Honey with a little salt and a drop or two of food coloring will get you a good Halloween orange, without the various other ingredients that give candy corn the texture of pasty candle wax. (Delicious, delicious candle wax.)

The night before you plan to serve the cocktail, freeze the water for a block of ice (if using).

When ready to serve the punch, place the ice in a large punch bowl. Add the fresh apple cider or juice, brandy or bourbon, sparkling apple cider, ginger ale, vermouth and vanilla, then stir gently to combine. Add the bitters, then taste and add some maple syrup, if additional sweetness is desired. Garnish with thin slices of lemon, apples, spices and rosemary, then generously grate nutmeg, if using, across the surface of the punch.

Serve over ice in punch cups or in rocks glasses.

For Halloween, it's possible to make a cocktail syrup out of candy corn, but you'll get a better-tasting cocktail by faking it: Honey and a little salt get you close to the flavor without all the extra preservatives. If you want a Halloween orange color, just add a bit of food coloring to the syrup.

Note: If you're serving guests and want to garnish their cocktails with candy corn, it's best to garnish all the glasses at once. Take a piece of the candy and wet the yellow base slightly, then slide it, pressing gently, along the rim of a cocktail glass. The candy's soft texture will yield to the glass edge, forming a little slit where the candy corn can sit. Move the glasses carefully to the freezer to chill, and set them out only when you're ready to make the drinks.

For the Salted Honey Syrup:

Make the salted honey syrup: Combine the honey, boiling water, salt and food coloring (if using). Stir until the salt dissolves and everything is combined. You should get about 1 ½ cups. Cool completely. (Syrup will keep covered container in the refrigerator for up to 2 weeks.)

Chill a cocktail glass. Fill a cocktail shaker with ice, then add the bourbon, lemon juice, honey syrup and bitters. Shake hard for 20 seconds, then strain through a fine-mesh sieve into the chilled glass, taking care not to knock off the garnish, if using.

This inky drink was made for Halloween, but it doesn't have to stay there. The bittersweet amaro Cynar 70 and sweet creme de cacao work well with blackstrap rum and are balanced by dry sherry. You can make the drink more seasonal with a creepy garnish -- or a bitter chocolate one since the drink is basically an adult trick-or-treat. Regular Cynar would work, and Cardamaro or Ramazzotti would substitute well, if necessary, but Cynar 70 is ideal.

1 ¼ ounces blackstrap rum, such as Cruzan

Place a large ice cube in a rocks glass. Fill a mixing glass with ice and add the rum, sherry, Cynar, creme de cacao and pinch of salt. Stir briefly to chill and dilute, then strain into the prepared glass. Garnish, if you like, with a square of chocolate placed on the rim of the glass. 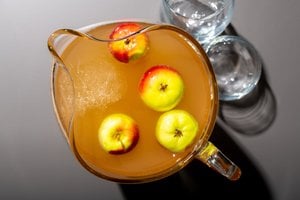 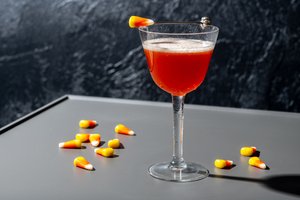 Print Headline: Spooky spirits: Halloween-theme cocktails that will have you howling for more