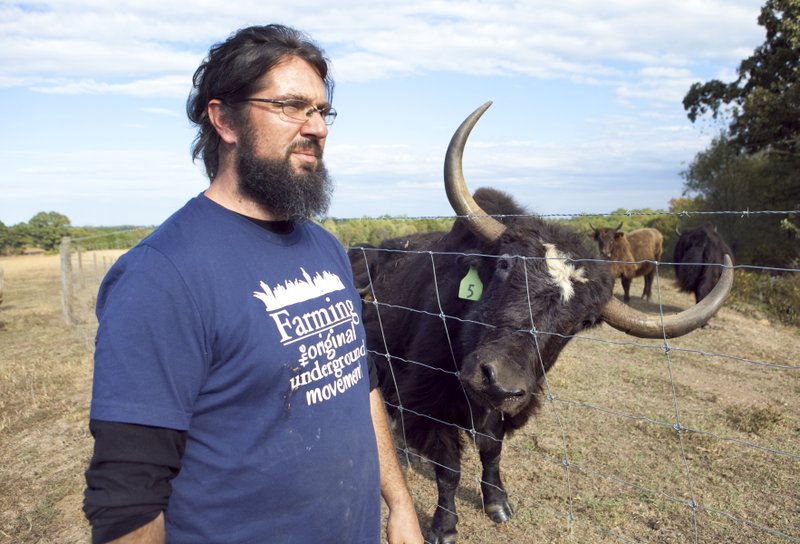 Yak farmer Robert Cissell stands next to the fence separating his yak herd from his domestic cattle at his farm in Buckingham County, Va. (Photo by Timothy C. Wright via The Washington Post)

Entrepreneurs chasing trends might seek out the flashiest or the most Instagrammable products to sell to the public.

"For me, doing yak was a two-edged sword," said Cissell, 42, proprietor of a 74-acre farm in central Virginia. "It's a novelty — people are curious to try new things. But it's also a novelty."

He spent years in the northern Virginia tech industry, but the bustle of the Washington region wore him down. He eventually settled with his family on 74 rolling acres in rural Virginia, trading traffic and gridlock for serenity and livestock.

Country life hasn't been without challenges. After moving about 50 miles south of Charlottesville, Va., in 2017, the Cissells lived in an RV with four kids under age 9 while rebuilding a moldy farmhouse and almost lost their youngest member to an E. coli infection. And Robert Cissell survived a yak attack.

It's also where he raised Meteor, a scheming male yak whose latent jailbreaking power earned him two week's worth of internet fame last month.

On Sept. 10, Meteor, one of more than two dozen yaks on the farm, was headed to a butcher when he slipped the bonds of a livestock trailer at a stop sign and escaped into the mountains. As the internet delighted in his freedom, Cissell searched for days, establishing a perimeter and setting a trap baited with sweet seed, Meteor's favorite treat.

But Cissell, who quit his tech job last year to farm full time, needed to chop Meteor up into $2,000 worth of meat — or see the fledgling farm take a major financial hit.

The efforts were for naught. After about two weeks on the lam, Meteor was struck by a vehicle on U.S. 29 and euthanized. Cissell took the animal back home to Nature's Bridge Farm in Buckingham County, Va., where he was laid to rest in a wooded clearing.

"Even though I'm new to this, I can keep working at it, accept that I'm going to make mistakes along the way," Cissell said. "Eventually, I can make this succeed." 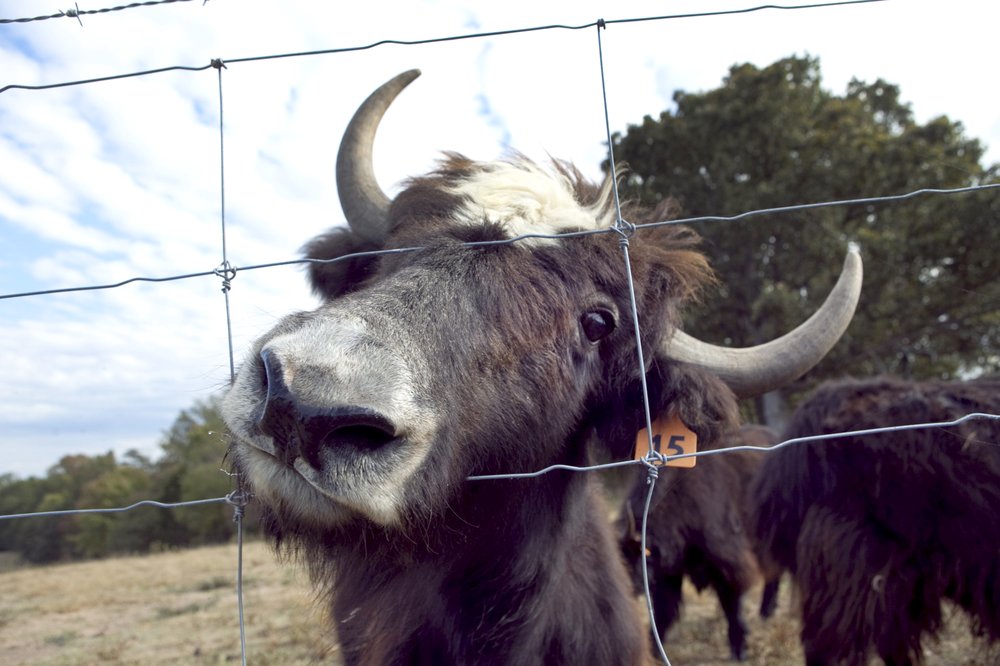 A yak living on the Cissell family farm in Buckingham County, Va., peers through a fence. (Photo by Timothy C. Wright via The Washington Post)

ON A HEALTH KICK

The University of Virginia student is on a health kick, trying to improve his cognitive abilities by consuming foods high in B vitamins. He was chasing livers, kidneys, hearts and other offal at the Nature's Bridge Farm stand, where Cissell was selling his wares with wife, Mackenzie Cissell, as their children Rylan, 9, Noa, 7, Charlotte, 4, and Remy, 3, swarmed about.

Wearing a "Got Yak?" T-shirt, Pollack marched up to Robert Cissell. "I love this man," the student said.

Love demanded dialogue. Pollack wanted to know the age of the yaks whose body parts he was buying and discuss methods for obviating the smell of urine that comes with cooking kidneys. He was ready to discuss American prejudices against eating animals "nose to tail" and myriad bone broths.

Cissell took his time with the conversation, selling Pollack $53 worth of meat. These are the types of transactions he has sought since Michael Pollan's local food manifesto The Omnivore's Dilemma moved him to try small-scale farming about a decade ago, when he left northern Virginia to try farming in Arkansas.

"We're getting to know our customers personally," Cissell said. "You get to where you know their story, they know yours. You're explaining why you're doing what you're doing and how you're doing it ... and a higher percentage of people are paying more attention to where their food is coming from."

Nature's Bridge Farm is also home to Mackenzie Cissell's Farming Artist business, the brand under which she sells vinyl stickers — agriculture-related and not — for about $5 each. In Charlottesville, she had goat, pig and chicken stickers next to lion, octopus and "Pride" stickers.

Though traveling to Charlottesville meant packing their four children into two vehicles at 6 a.m., along with tables, a tent and two coolers for the hourlong car ride, Saturday was a good day. The Cissells earned $1,177 before expenses — $763 from Mackenzie and $414 from Robert.

"It does really well," Mackenzie Cissell, 31, said of the Farming Artist. "I'm getting a pretty good following. A lot of it has to do with the story."

And this was the strange truth of Nature's Bridge Farm: Mackenzie can make more money selling stickers about farming than Robert can make farming.

Her vocation requires paints, a computer and an Instagram account. His requires dozens of ruminants weighing at least 700 pounds each, pasture rotation, 1,000 pounds of hay every three days, fencing, veterinarians and building relationships with a small cohort of yak farmers around the country.

Despite the challenges, a few proud agrarians can't quit yaks.

Cissell says Ken Zlotkowski is Virginia's only other yak farmer, and Zlotkowski agrees. A former Environmental Protection Agency employee, he started a herd of up to 20 animals in 2001 at his 70-acre farm in Powhatan, Va., before he retired.

Zlotkowski said he was drawn to yaks because of their lean, tasty meat — "If somebody served it to you, you probably wouldn't know it wasn't a steak," he said — and because each animal has its own "yakinality," or yak personality.

"Some want to come up and are friendly, others are standoffish, others are curious about everything," he said. "They're a lot of fun to watch."

"If I could have made a living off it, I would have," Zlotkowski said. 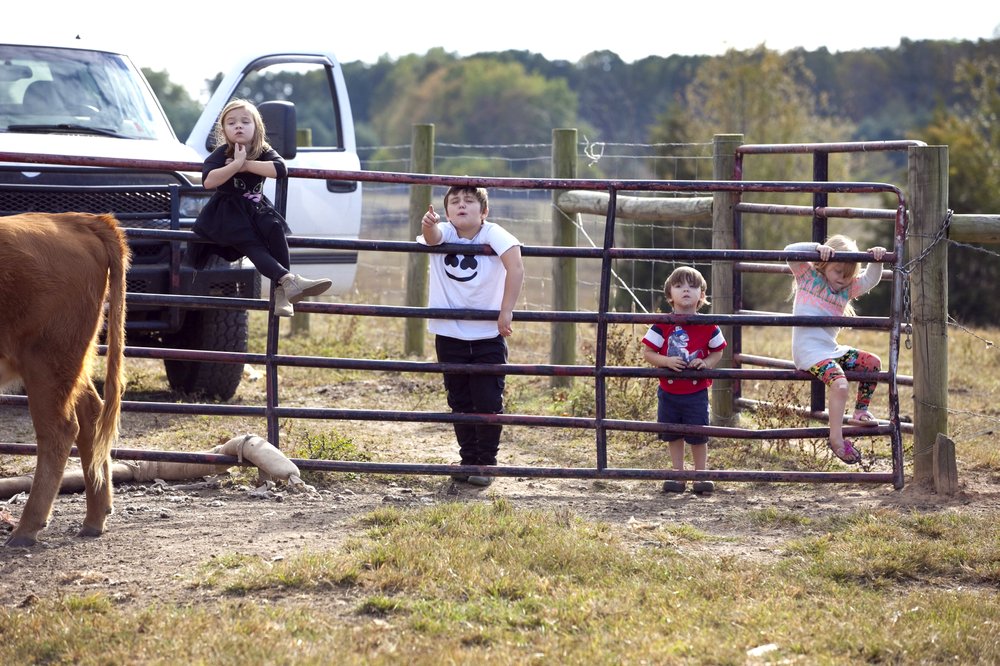 As their parents tend to the yak herd on their family farm in Buckingham County, Va., the Cissell children (from left: Noa, 7, Rylan, 9, Remy, 3, and Charlotte, 4) watch from the other side of the gate. (Photo by Timothy C. Wright via The Washington Post)

He and Mackenzie met years ago when she worked with his brother at a Manassas, Va., bookstore, and they started dating in 2013. Cissell decamped from his 20 acres in Arkansas, and the new couple bought a house the next year in southern Virginia. Mackenzie Cissell left her job with the Rappahannock County (Va.) School District, where she was in line to become the finance director, for a slower lifestyle on 15 acres.

"It was my dream house, really," she said. "It was beautiful. Combined with the amount of acreage at the time, it was a compromise. It was something I could live in comfortably but was a way for Robert to do farming comfortably."

Robert Cissell, however, wanted more land, so the couple moved in 2017 to the plot that would become Nature's Bridge Farm.

His dream was coming true if only his family could adapt to it. He spent much of the 2000s living in northern Virginia, sitting in traffic, shuttling to and from his tech job in Arlington, Va. He wanted to do something other than go to work and come home from work, he said.

At Nature's Bridge Farm, the yaks are big, hungry, hairy and mysterious. They have names that evoke flowers ("Petunia," "Lotus") or their personalities ("Feisty," "Lil Furball"). Squint, and they don't look much different from the cattle.

Only as the yaks rush the fence line when Cissell shakes a bucket of treats are their unique features revealed — wiry coats, curly horns and powerful legs straight out of Tibet. On the Virginia farm's grassy hills, yaks look like exotic animals imported from a faraway land, which they are.

Mackenzie Cissell doesn't love all of them. She can't always tell them apart.

"He has a soft spot in his heart for the yaks I don't understand entirely," she said of her husband. "I guess everyone has their thing and this is his thing."

When the couple first arrived in Buckingham County — population 17,000 — it was hard for her to accept the farming life she now celebrates in art. Sometimes, it still is. She misses being able to drive five minutes to the grocery store. She misses sidewalks when it rains and the farm turns into a mudbowl.

"It was a big transition," she said. "I wasn't used to this lifestyle. Something was telling me I wasn't supposed to be here."

There were many of those somethings in the beginning. The family planned to spend a few months in a 300-square-foot RV on the property as they fixed up a homestead likely built in the 1890s. That turned into 15 months — Cissell working his tech job remotely all day, then replacing windows and rebuilding floors into the night with the help of hired neighbors. Meanwhile, Remy turned up with an E. coli infection, requiring emergency surgery and round-the-clock dialysis.

"As a mother, that was one of my biggest concerns," Mackenzie Cissell said. "I almost threw in the towel then and there ... Chances are it was something he got here."

Then there was the yak attack. Long before Meteor's escape and subsequent demise, Nature's Bridge Farm made headlines in 2017, when a mother yak charged Robert Cissell and then-7-year-old Rylan called 911. Cissell said he was trying to corral the animal without realizing it was feeling aggressive. He wouldn't make the same mistake today, he said, but his wife is still leery of the creatures.

"If something happens ... I'm out here on this land, with these animals I don't know how to care for and four kids," she said. "I still don't know what I would do if something like that happened today."

Meteor's death gave the Cissells a new sense of purpose. Attacked online after the animal became a social media hero, Mackenzie Cissell defended their choices, explaining the philosophy behind their farm and why the expensive animal's escape wasn't a victory.

Robert Cissell's resolve never wavered. Looking out at his property, he talked about how grass-fed husbandry can mitigate global warming. He talked about how small farms rarely face the food recalls of factory farms because they raise animals responsibly. He talked about the possibilities additional acreage would provide, but also the need to use his existing acreage wisely.

Success will come, he said, "if we keeping working a little bit at a time."

"Rome wasn't built in a day," he added, "and neither is any successful farm that's out there."

Yak farmer Robert Cissell hasn't always toiled in Virginia. From 2009 to early 2014, he farmed in the Land of Opportunity, up north in Sharp County's Cherokee Village.

"My life there was fairly quiet. I was new to the area and focused on my work initially, and eventually my farm as well. At the time I only had cattle, sheep, goats and chickens, and it was much smaller in terms of headcount, as I only had 20 acres," Cissell wrote in an email interview from his farm in Buckingham County, Va.

In 2014 Cissell moved back east to be closer to family. Arkansas, he says, "was beautiful, but being so far from everyone made me feel a bit cut off so I wanted to get back closer."

Cissell says he wasn't looking for any fame when asked what it was like to be thrust into the national spotlight by the yak story going viral. His only goal was "just to have a family and a farm and grow a small business."

Has the spotlight helped the business? "So far, there hasn't really been any noticeable upswing in business. Maybe it'll come, maybe not. I'll just keep plugging away in the meantime."

To find out more about the Cissells and their farm, visit appyaks.com.

Print Headline: A knack for yaks