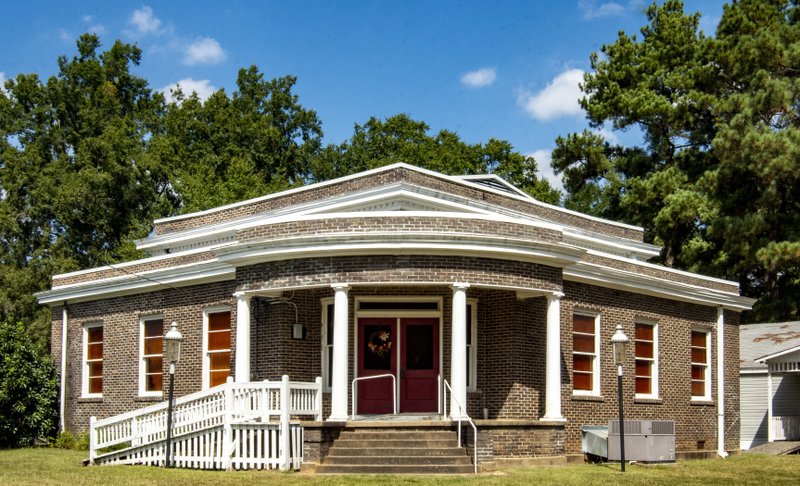 EMMET — As any 3-year-old is wont to do, the youngest member of Emmet United Methodist Church, Paisley Eisenhower, squirms during a recent Sunday service. She's sitting in a pew with family, including the oldest member of the church, her great-grandfather, Don Trexler. The family makes up about a third of the congregation this morning.

In May, the church was placed on Preserve Arkansas' list of Seven to Save Endangered Historic Arkansas Buildings. But this small congregation that has between eight and 12 worshippers on any Sunday is determined to save the structure that was built about 1917 or 1918.

It's an unusual-looking church, built in the Colonial Revival style, but with an interior according to the Akron Plan, a style of church including rooms for Sunday School classes. The style originated in Ohio and was adopted by Protestant churches throughout the United States, according to the nomination form written by architect Gary Clements for the Nevada County church to be included in the list of endangered buildings.

[Gallery not showing up above? Click here for more photos » arkansasonline.com/galleries/27469/album/]

The square structure has an entrance cut into the south corner, with a curved portico and four white pillars. On the lawn on each side of the portico are gas lights made sometime in the late 1950s at Arkla Village, a long-closed tourist village at Emmet.

The church is on the National Register of Historic Places, and the nomination form prepared by the Arkansas Historic Preservation Program gives architectural details. "While the Emmet Church adopted the Akron Plan for its interior, it followed the early 20th-century trend of Colonial Revival for the exterior. The building utilized brown brick with white trim and accentuated the front door with an entrance porch supported by

fluted columns. The facade is symmetrical. Dentils are one of the architectural elements decorating the heavy cornices."

The sanctuary is also square, with the lectern/altar area in the far corner and curved pews on each side of a narrow center aisle. Wooden garage-style roll-up doors on two sides of the sanctuary were made to be opened if more space is needed for services, and they could be closed for Sunday School classrooms. Stained glass windows that include images of Jesus Christ and of John Wesley, the founder of Methodism, fill the northwest wall of the church. An arched alcove contains the church's piano and seating for a choir with a stained-glass window on each side.

Time and water, however, have damaged the building. Plans are in place to stabilize and then restore the 100-year-old structure.

"We are planning on this church standing here as part of this community. We don't want to see this church fail," Don says.

The church is very important to its members, although they are few. Don's brother, Charles Trexler, who lives at Magnolia, says that going to Emmet for church each Sunday is like coming home. Current congregants are second- and third-generation church members.

"We're a small congregation and we're an old congregation, but as long as we get going here and keep going here," Don says about the effort to restore the church, "we're hoping to get younger people coming in."

So what needs to be done to bring the building back from the brink? Well, there's a list of items that need to be repaired, including the foundation, the roof, the walls and the wiring.

The congregation learned how bad damage was to the post and beam foundation when Charles crawled underneath the church with a camera. Until then, they were not aware of the extent of the damage caused by termites, moisture and age.

Water has also insinuated itself between the brick exterior and the interior walls with their wooden framework.

Clements explained in the nomination form how water is damaging the structure. "The building has two roof levels, which are covered with an aged roof membrane. The rain sheds from the roof through scuppers into downspouts, which have all rusted through or fallen off the building, allowing the water to run down the face of the brickwork, or in the worst area, between the brickwork and the wood framing inside the wall to rot the rim and floor joists. There is also rot and termites under the main entry door area and under one of the main support columns."

The brick used for the church, according to member Dianne Halliwill, was obtained by the Boyd family by bartering. The family, which donated a lot of money to the construction of the church, were farmers, Halliwill says. The brickyard in Hope used mules in the brickmaking, and the Boyds had grain, so they swapped grain to feed the mules for the bricks to build the church.

Because the building is listed on the National Register, Dianne's husband, Steve Halliwill, says the exterior brick walls must be restored rather than replaced: They have to repair and reuse the original brick.

These efforts will help to stabilize the building, but after these first steps, more money is needed to finish restoring the church for future generations.

Clements noted in his nomination, "This church is important. The building is unique and significant in history. Its current physical condition and the economic situation of the region makes the Emmet United Methodist Church endangered."

This is Part 5 in a series on the seven structures Preserve Arkansas spotlights in its 2019 list of the state's most endangered historic places. See earlier articles at arkansasonline.com/endangered.