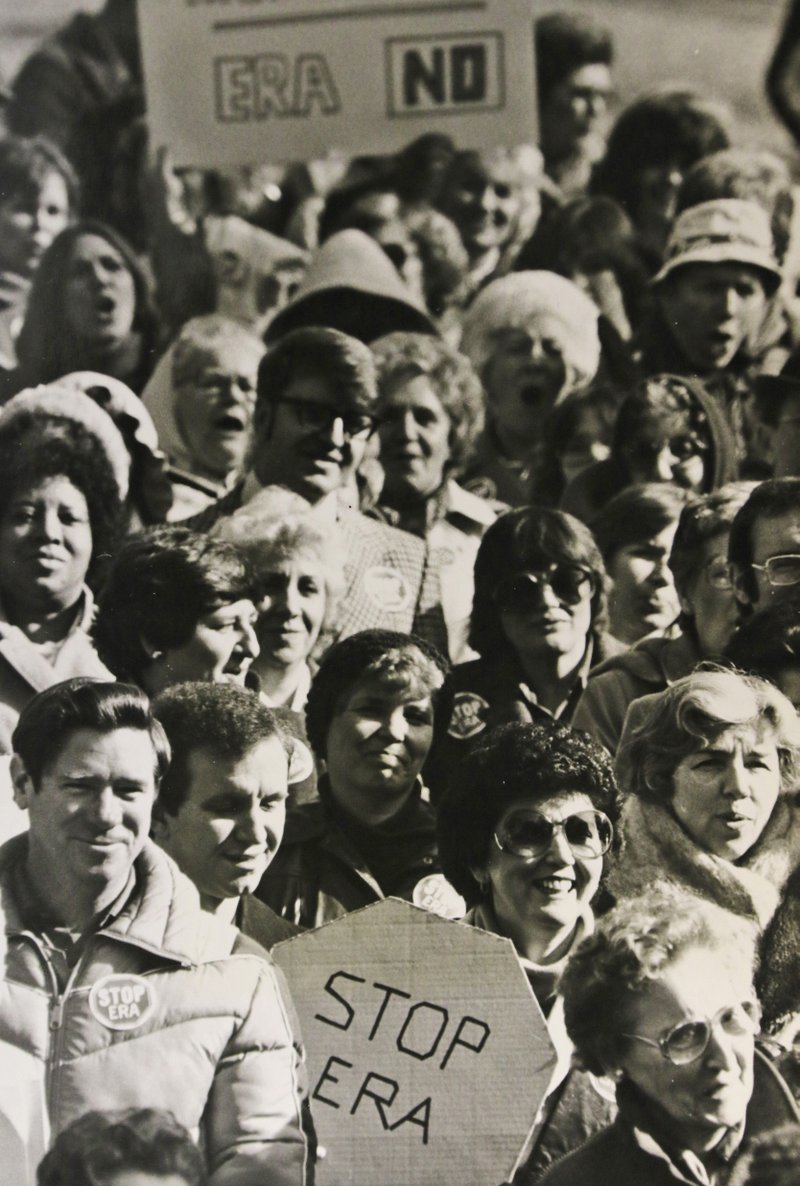 FILE - In this Feb. 2, 1982 file photo, opponents of the Equal Rights Amendment listen to speakers during a demonstration at the Capitol in Richmond, Va. Advocates of the Equal Rights Amendment are mounting a tremendous effort to elect supporters of the long-stalled gender equality measure next month in Virginia's elections. (AP Photo/Steve Helber)

RICHMOND, Va. -- As Carol Jenkins sees it, a nearly 100-year push to add the Equal Rights Amendment to the U.S. Constitution is closer to reality now than it's ever been.

That's why there's a "tremendous effort" underway to elect supporters of the long-stalled gender-equality measure in Virginia's elections next month, said Jenkins, co-president and CEO of the nationwide Equal Rights Amendment Coalition. Advocates hope that if they can pick up a few seats from Republican opponents, the once solidly conservative state that's voted down the Equal Rights Amendment time and again might instead be the critical 38th to approve it.

Virginia voters "have the future of girls and women in their hands," Jenkins said.

Initially proposed in Congress in 1923 and passed in 1972, the Equal Rights Amendment would ban discrimination on the basis of sex, explicitly enshrining equality for women in the U.S. Constitution. Thirty-seven states have ratified it; supporters say having 38 would meet the constitutional threshold for approval.

But a 1982 ratification deadline set by Congress, and other questions, could hold up the efforts in court, many legal experts say.

Equal Rights Amendment opponents criticize the measure as unnecessary, in part because of the 14th Amendment, which guarantees all U.S. citizens "equal protection of the laws."

They say the long-passed deadline means the amendment isn't eligible for ratification now, something proponents say Congress could resolve.

Critics also point to the five states that ratified it in the 1970s, then later moved to rescind their support.

Still, women's advocates are seeking victory for a movement that has outlived many of its members. They say the amendment has a good chance of advancing in a state that has undergone political shifts because of increasing diversity and the growing activism and political power of women.

Hornung's group has an ice cream van touring college campuses around the state to educate students who weren't yet born when the proposed amendment was a hot topic. Volunteers from all 50 states have participated in the group's get-out-the-vote postcard campaign, according to Hornung.

National groups have pitched in with fundraisers and outreach, Jenkins said. Many Democratic candidates -- men and women -- have made the Equal Rights Amendment part of their campaigning. Celebrities have joined the cause.

At the state level, some Republicans are pushing back.

Holcomb, who used to work for the conservative interest group Eagle Forum, founded by the late Equal Rights Amendment opponent Phyllis Schlafly, said an amendment is an ineffective tool to tackle the issues of sexual violence and the exploitation of women that have surfaced during the #MeToo movement.

Opponents also say an amendment could erode some protections for women and girls -- such as the Women, Infants and Children nutrition assistance program or workplace accommodations during pregnancies -- as well as limit abortion restrictions and force homeless shelters, bathrooms and other public places to be opened to both sexes.

They also cite the cost of anticipated legal battles, as the issue is widely expected to end up at the U.S. Supreme Court.