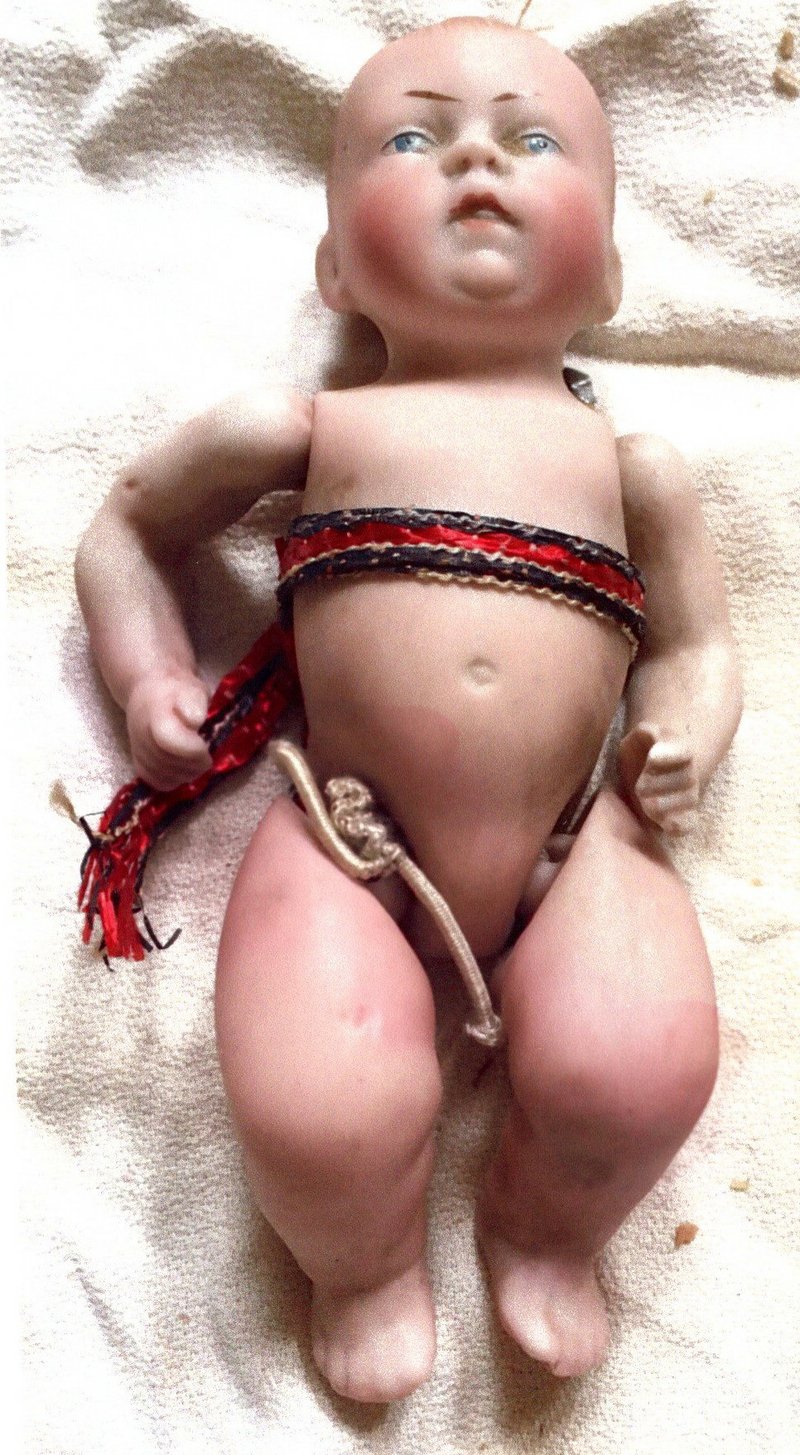 TNS handout This bisque baby figurine is perfect for a nativity scene.

DEAR HELAINE AND JOE: This little porcelain figurine belonged to my great-grandfather. My father told me that each year at Christmas his father would put up a Nativity scene in the living room and this piece would represent the baby Jesus. The box is original but broken and falling apart. It has no markings. I am wondering if my figurine has any monetary value.

DEAR J.M.: We can picture this little fellow lying in his padded box making a wonderful representation of the baby Jesus in a Nativity scene. What a warm and wonderful piece of family history that is -- the ancestral association is its true value -- but it is worth some dollars as well.

Identifying dolls can be very easy, or it can be very hard. Often the name of the manufacturer is impressed in the back of a doll's head. The information is often coupled with a mold number that gives a complete picture of the doll's history and value.

The doll in today's question is all bisque with jointed shoulders and hips, molded hair, painted blue eyes, a character face, bent limbs and the number "830-23-" between its shoulders. The term "character face" means the doll has a face reminiscent of one that might be found on a real person.

"Bisque" means the material was tinted, unglazed, once fired porcelain with a matte finish. (The term "china" doll would refer to a piece made from glazed porcelain that has a shiny finish.) It is unfortunate, but the mold number found on the back of the doll cannot be ascribed to a specific manufacturer, but the probability is the maker was working in Germany.

It is generally thought that the 830 all-bisque character dolls were made after about 1910, and they came in a variety of sizes and characteristics. Some had glass eyes; some had painted eyes; some had swivel necks; some had stationary heads. Glass eyes are usually a plus in small bisque dolls. Swivel necks are also desirable.

J.M.'s example, with its slightly opened mouth and cute little belly button (yes, it's an innie), has a face that makes it look like a perfectly miniature human being. Some people find a homunculus (i.e. a perfectly formed small-scale human being) to be creepy and off-putting, while others find them charming.

In many cases, the value of 19th- and early 20th-century dolls has declined in recent years, and demand appears to be down because fewer young people find the porcelain playthings to be appealing. At one time in the not-too-distant past, the doll -- depending upon its size (and we are guessing somewhere in the 4- to 6-inch range) -- would have been valued for retail purposes in the $250 to $350 range, but currently that seems to have softened considerably to the neighborhood of $75 to $125.

Helaine Fendelman and Joe Rosson have written several books on antiques. Do you have an item you'd like to know more about? Contact them at Joe Rosson, 2504 Seymour Ave., Knoxville, TN 37917, or email them at [email protected] If you'd like your question to be considered for their column, please include a focused, high-resolution photo of the subject with your inquiry.