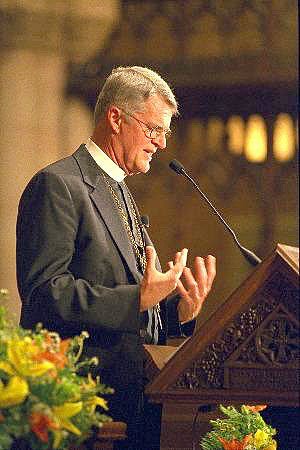 Courtesy Photo "It's a gift and a joy to be with worshipping congregations in various parts of the country," says Frank Griswold, 25th Presiding Bishop of the Episcopal Church. "What's their context? What's their passion? What can I share? And what can I learn?"

Frank Tracy Griswold's biography is nothing short of intimidating. He earned one degree at Harvard University and two at Oxford University, plus he has nine honorary degrees, including one from Rikkyo University in Tokyo. He's written three books. He was ordained to the priesthood in 1963 and served as co-chairman of the Anglican-Roman Catholic International Commission and on national and international liturgical and ecumenical/interfaith commissions and institutes, both before and after being elected the 25th Presiding Bishop of the Episcopal Church in 1998. For context, the Most Rev. Michael Curry, the current Presiding Bishop, shook the rafters of St. George's Chapel when he preached at the 2018 wedding of Prince Harry and Meghan Markle.

All that being said, a phone conversation with Bishop Griswold ranges easily from his childhood -- he grew up in Philadelphia, the son of "cultural" Episcopalians who didn't really practice the faith -- to playing Snoopy in a dioceses production of "You're a Good Man, Charlie Brown" the night before he had to tell his congregation he'd been elected Presiding Bishop, to standing in front of the San Damiano Cross in Assisi -- the one that is said to have spoken to St. Francis of Assisi, telling him "Francis, go and rebuild My church."

The Most Rev. Frank Griswold

"I cried," Griswold remembers. "I thought, 'This is what I'm called to do.' Then, I thought, 'Frank, you're so dramatic. Just calm down.'"

In other words, Griswold does not take himself seriously. But he does take his faith seriously, perhaps even more so now that he is "pensioned." Not having an official stance on anything means he won't comment on issues in the church; he believes that is now the Most Rev. Curry's job. But that gives him latitude to share his heart, and he wants to make sure what he says matters.

Griswold is in Fayetteville this weekend in a rare convergence of the fates. A Jewish friend at his gym in Philadelphia had an Episcopal friend in Fayetteville, and he suggested Griswold visit as part of the Tippy McMichael Lecture Series. He admits he didn't know much about Fayetteville, but he loves the Midwest -- he spent 13 years in Chicago -- and he loves to see congregations like the one at St. Paul's in action.

"The church can be seen so abstractly when you're a symbolic figure who oversees a portion of it," he says. "It's a gift and a joy to be with worshipping congregations in various parts of the country. What's their context? What's their passion? What can I share? And what can I learn?"

Griswold might have seemed the least likely person ever to become Presiding Bishop. He went off to boarding school in the eighth grade at St. Paul's School in Concord, N.H., even though his parents weren't devout. His father had gone there, he says, plus he believes his mother wanted to get him out of a home unsettled by alcoholism. At school, "a whole world of worship and liturgy and stately ceremony was opened to me," he remembers, and several priests saw his interest and became his mentors. Still, he admits, his roommate "screamed with laughter" at the idea he was being groomed for the ministry.

"The shock value was worth taking this seriously," he remembers, laughing. "Vocation doesn't always come in Victorian pious wrapping. Wacky things happen to us."

Griswold refers several times to the "Divine sense of humor," but he also says he worked tirelessly to bring factions of the church together.

"If you begin not with where you disagree but who Jesus is for you, begin at that fundamental level, you may find strong common ground. That doesn't obliterate the disagreements, but you can see the other as a brother or sister and not an enemy."

At tonight's public lecture, Griswold plans to talk about the theological aspect of protecting the environment.

"In Scripture, Christ is the agent of creation, so all things are made in some ways through Christ, as is every person just because they exist," he says. "What does it mean to be made in God's image? We are created with the ability to love. So what does love mean in relation to creation?

"It's an invitation to look at the whole environmental crisis from the point of view that the Earth is our sister and we should treat it with respect and reverence and be grateful for it. We should live in harmony and respect with creation because creation is sacramental."

And then, he says, a smile clear in his voice: "I didn't want to be too narrowly Episcopalian."

Print Headline: The Most Reverend