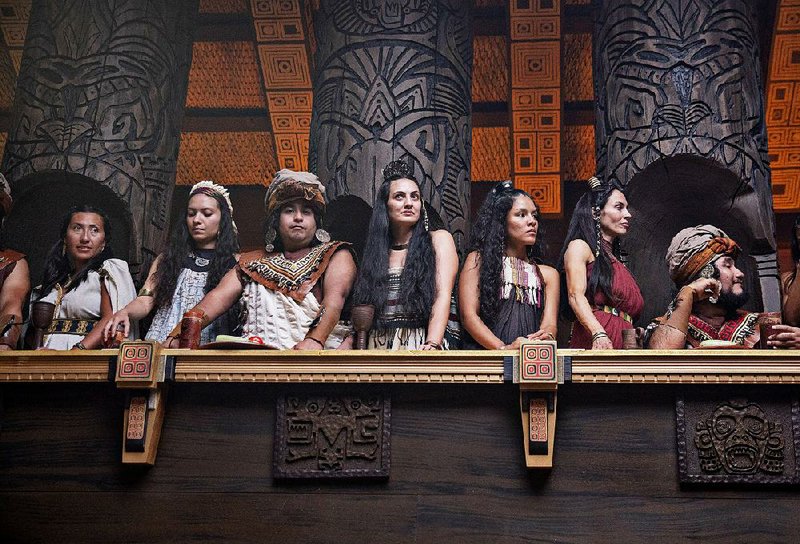 Extras wait between scenes in one of the “Book of Mormon Videos” produced at a studio owned by the Church of Jesus Christ of Latter-day Saints, in Provo, Utah.

PROVO, Utah -- In the heavy quiet of the Utah desert, past fields of alfalfa and fruit trees, past the Goshen trailer park and a big, sprawling dairy farm, the domes of Jerusalem rise up from the patchy grass.

Set way back from the road, this maze of open-air passageways and courtyards is about the size of two football fields, an unusual vision of limestone bumping up against the Utah Rockies. It has played host to Mary and Joseph, John the Baptist and Jesus -- as well as Lehi, Amulek and Alma the Younger.

This is the Motion Picture Studio South Campus, owned by the Church of Jesus Christ of Latter-day Saints. The Jerusalem set, near Goshen, Utah, is part of the church's substantial film and media production arm, which includes full-time producers, editors and animators, and a fully equipped studio in Provo, complete with sound stages, editing bays and a clutch of 19th-century Americana houses constructed on a backlot.

The church is an important piece of a film and TV ecosystem in northern Utah, which includes a small world of independent films that cater to the Latter-day Saints market, BYUtv (part of Brigham Young University, which is affiliated with the church), as well as mainstream commercials, television and movie productions that film in the state, drawn by a generous rebate program and its proximity to Los Angeles.

Taken together, it's like its own little Hollywood in the mountains. For the country's 7 million Latter-day Saints -- 6,709,072 according to the church -- it is also an answer to a culture that often does not speak its language and a way to reinforce the conservative values it finds lacking in much of popular entertainment.

Here, the faithful can see their own stories -- films about prominent church figures or a series re-enacting Bible scenes -- without the mockery they're often subject to, as in Broadway's The Book of Mormon musical. And there is not an R rating in sight.

A BOUNTY OF WORK

Ben Hoopes, a carpenter with a slow, rolling voice, builds sets in Utah. In December, he made one for a church Christmas concert. Then he put together a talk show set for BYUtv, before moving on to High School Musical, a Disney show filming in the area. After that, he worked on the church's most recent big project: a video series that visualizes (not dramatizes) scenes from the Book of Mormon; it began releasing episodes Sept. 20.

On a sunny September morning, Hoopes was out at the church set near Goshen patching up the "limestone" walls after a stretch of shooting for the Book of Mormon video series. This Jerusalem (or Bethlehem or Mesoamerica or wherever the church needs it to be) has a concrete foundation and wooden frame, but the facade is made of Styrofoam coated in a stucco and then painted a nice sandy color. Birds like to nibble at the stucco.

There is a whole community of crew members, directors and producers who, like Hoopes, carve out a living working freelance in Utah. "I've always had an abundance of work here," said Chantelle Squires, a director and producer based in Utah who has worked with the church, BYUtv and in local independent films. "I've always felt like, why would I leave?"

On the set, one camera was trained on a group of women dancing in flowy, midcalf skirts, swishing scarves around their heads in a demure nod to seduction. Another focused on the wicked King Noah who drank wine and flirted with concubines from beneath an elaborate hat.

Nearby a producer named Aaron Merrell, who works full time for the church, draped a well-worn copy of the Book of Mormon across his lap, "Season Three" printed neatly in permanent marker along the outer pages. This was a shoot for the church's video series, and Merrell was keeping an eye on their scripture to make sure the action stuck to its source material.

The church teaches that in the early 19th century, its founder, Joseph Smith, discovered inscribed golden plates buried on a hill near his home in Palmyra, N.Y., which he then translated into English, creating the Book of Mormon. Among other proclamations, the book holds that Jesus Christ appeared in the Americas after his resurrection. That book sets the Latter-day Saints apart from other Christian denominations, who even today often view the relative newcomer faith as suspect -- or even apostate.

The Book of Mormon Videos are being put on YouTube so anyone who wants to watch them can: Missionaries who will use them as proselytizing tools or members who might show them to their kids. And, the church hopes, perhaps even nonbelievers who are curious about the faith will watch.

The church also makes self-help and inspirational videos that live on YouTube, on topics such as addiction and bullying. There are videos for use in its temples, as well as instructional videos on topics including how its clergy should protect children from abuse, directions for missionaries on diet, hygiene and exercise, and even advice on how to maintain a church parking lot.

"The goal of all of our productions is to create messages that invite all of God's children to follow Jesus Christ," said Scott Smiley, director of film and video for the church. "That goes from parking lot maintenance videos all the way to the Bible and Book of Mormon videos.

John Hajicek arrived at the Megaplex Theaters at Jordan Commons in Sandy, Utah, dressed in a sharp blue suit, clutching a locked briefcase in each hand. Inside, he carried what he said was precious Latter-day Saints memorabilia. He had copies of the Book of Mormon that appear to have been printed in the 19th century. An early pencil sketch of Joseph Smith. A suede map Smith supposedly carried around in his pocket.

Hajicek had been invited to a film screening that night for Out of Liberty, a movie about a jailbreak, in which one of the people doing the breaking is Joseph Smith.

"To all the descendants of Joseph and Lucy," Michael Kennedy, one of those descendants, said from the front of the theater, "would you please stand up."

Several dozen people put their popcorn aside and rose from their seats. The room took it in ("Wow!" a woman breathed) and then burst into a firm and gracious applause.

And with that, the movie could start. 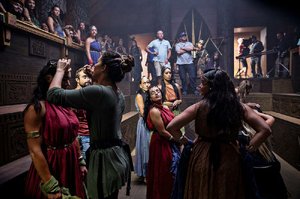 Photo by The New York Times/KIM RAFF
Hair and makeup are checked between scenes at a Provo, Utah, studio owned by the Church of Jesus Christ of Latter-day Saints. 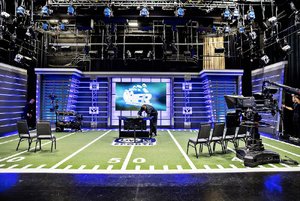 Photo by The New York Times/KIM RAFF
This is the set of After Further Review, a sports talk show on BYUtv, at a studio on the campus of Utah’s Brigham Young University. 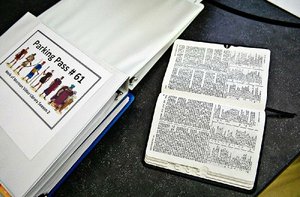 Photo by The New York Times/KIM RAFF
A Book of Mormon lays open at a film studio owned by the Church of Jesus Christ of Latter-day Saints in Provo, Utah.