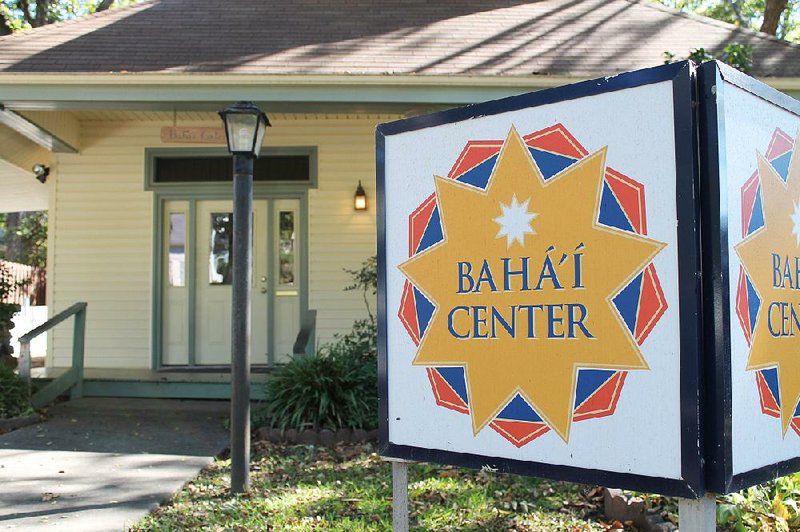 The Little Rock Baha’i Center on Pine Street in Little Rock will be the site of celebrations Monday and Tuesday for the 200th anniversary of the Bab’s birth, and that of the birth of Baha’u’llah, who was born two years before the Bab. The two central figures of the faith are celebrated at this time each year worldwide in what are known as the Twin Holy Birthdays.

Members of the Baha'i faith in Arkansas are gearing up to commemorate the 200th anniversary of the Bab, one of the religion's divine messengers, and will join millions of people worldwide in what is being considered a time of joy and celebration.

Bab, Arabic for "gate," is the name taken by Siyyid Ali-Muhammad in 1844, when the merchant from Persia (now Iran), founder of the earlier Babi religion, declared himself the bearer of a revelation from God and said he heralded the arrival of a divine manifestation. The Bab paved the way for Baha'u'llah -- Arabic for "glory of God" -- who later founded the Baha'i faith.

The religion, one of the world's most widespread, has grown to have at least 5 million members worldwide, according to the Baha'i World News Service. An estimated 250,000 live in the United States. In Iran there are 300,000 adherents, making it the country's largest religious minority, according to the denomination.

"He had a short and eventful and kind of dramatic life, but he's basically the beginning," said Laila Harris of the Bab. "His declaration, of what his mission was and who he was, is considered the beginning of the Baha'i faith."

Baha'u'llah and the Bab were born two years apart in Persia -- in 1817 and 1819, respectively -- and the celebration of the Bab's birth comes two years after a bicentennial commemoration of Baha'u'llah's birth in 2017. The two are not related and never met, but their births are observed as a twin anniversary because of the proximity of their birthdates, which fall a day apart on the lunar calendar.

The Bab was first imprisoned and then executed for his beliefs by order of the Persian empire in 1850; Baha'u'llah, born Mirza Husain Ali Nuri, experienced exile and imprisonment and died in 1892.

Harris, a member of Little Rock's Baha'i community, said she will serve in a facilitating role at one of several area events that will be held today, Monday and Tuesday.

A celebration of the 200th anniversary of the Bab's birth will be held from 7-9 p.m. today at Ron Robinson Theater, 100 River Market Ave. in Little Rock. A portion of the event is dedicated to a film screening of the faith-commissioned movie, Dawn of the Light, which portrays perspectives on the Bab and Baha'u'llah as twin manifestations of God.

Tommy Diaz of Little Rock will be a master of ceremonies at today's event. A lifelong Baha'i, Diaz attended college at Northwestern University in Evanston, Ill., and was within walking distance of the faith's North America temple in Wilmette, Ill., one of 10 such houses of worship worldwide.

Diaz said the movie embodies the unity and oneness in humanity that the faith claims as one of its central tenets.

"One thing that really struck me [about the movie] was that it was not only about the life of the Bab, but it was told and depicted from Baha'is all over the world," Diaz said. "You really got a sense of the Baha'i community from all different walks of life, the activities they were involved in, [and] what being a Baha'i meant to them. It reinforces that unity."

Baha'i's believe that there is one God and one religion that has manifested in the form of messengers throughout time, including Krishna, Zoroaster, Jesus, Muhammad and Buddha.

Another foundational belief is that each person should not take his or her faith blindly, but investigate truth for themselves -- without the guidance of clergy, which do not exist in the religion. Area spiritual assemblies and national assemblies are under the Universal House of Justice in Haifa, Israel, the top governing authority of the faith.

The principle of investigation is lived out in the Baha'i Club at the University of Arkansas at Fort Smith, where Dr. Mary Sobhani, head of the university's World Languages Department, has advised the organization since its founding in 2016. Many members of the club are not Baha'i. Sobhani, who is Baha'i and a member of the Fort Smith Spiritual Assembly, said past presidents have belonged to Buddhist, Methodist and other faith traditions, and members also span a range of religions.

The focus of the club, she said, is on learning and working toward the betterment of society.

One of the few requirements for students to be a club member is that they serve in some capacity. Baha'is gather for readings in the faith but do not engage in rituals or liturgies, believing that work in the faith is considered worship. Members have led junior-youth groups, known officially as the Junior Youth Spiritual Empowerment Program, which engages with children ages 11-14 in part to teach virtues.

"The [groups] are so fun, you get to [teach] things, like, 'What is honesty, what is integrity? Let's talk about patience.'" Sobhani said. "The ... program helps junior youth deal with the fact that they're living in a world today where there [are] really destructive forces and there [are] constructive forces, and it's hard to identify them ... and [the youths] are grown up enough to make either really good decisions or really bad decisions."

The club engaged in reading about the celebration of the birth of the Bab this week, and on Tuesday Baha'is and members of the Fort Smith community will gather for a dinner and program to commemorate the holy day.

Once Baha'is are considered to have come of age at 15, they pick from one of three prayers that they must recite daily, Harris said. One prayer that adherents can choose to recite reaffirms their witness that God created humans to know and worship him.

"That vow, 'Thou has created me to know thee and to worship thee,' -- there's a little bit more to that," Harris said. "To me, when people wonder, 'Well, what's the meaning of life?' well, there you go."

The Little Rock Baha'i Center, 511 N. Pine Street in Little Rock, will celebrate the birth of the Bab at 6 p.m. Monday, and the birth of Baha'u'llah at 7 p.m. Tuesday. Visit bahai.org/dawn-of-the-light to watch Dawn of the Light; more information about the Baha'i faith is available at bahai.org.