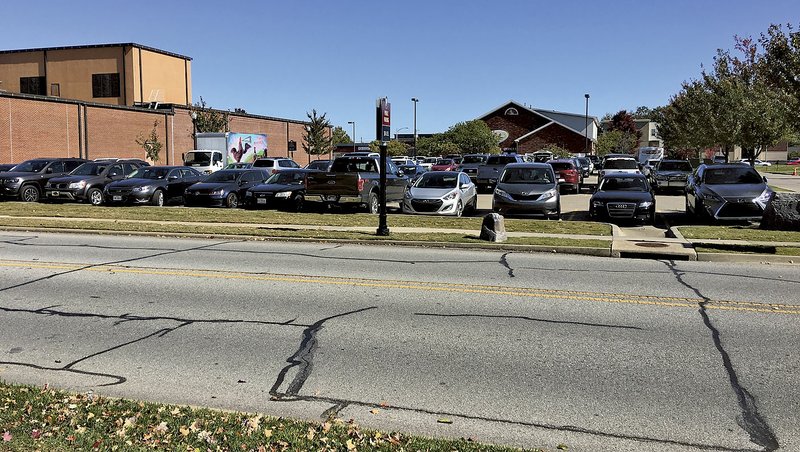 NWA Democrat-Gazette/MIKE JONES This public parking lot on Southwest A Street owned by Bentonville could be the site of a parking garage. A lease proposal was discussed by the City Council on Tuesday night.

BENTONVILLE -- The City Council on Tuesday night unanimously approved a lease with a company wanting to build a parking garage downtown.

The area is between the AT&T building and the Downtown Activity Center on Southwest A Street. The city owns the 52-spot public parking lot there now. The lot is on a little over half an acre, according to city documents. The city purchased the property in September 2009 for $160,000, said Debbie Griffin, city community relation/economic development director. The property appraised for $1.3 million in September, according to city documents.

There are about 1,400 downtown parking spaces, but not all are owned by the city, Griffin said. The parking garage would hold 342 spaces, she said.

The lease is with Center City LLC, according to city documents. Center City would build the structure. Josh Kyles, managing member of Center City, said it could take 12 to 18 months to complete the project.

The city would continue to own the land and would have exclusive right to 52 spots on the first floor of the parking garage, according to the lease. There would public use on the second floor for nights and weekends, the lease notes.

"We realize for city growth to continue downtown, we must address the parking issue," Griffin said in email. "It's a win for both parties and a much-needed amenity for motorists. There is an economic development component to this by providing additional parking we are bringing more people to downtown to shop and eat, which impacts our sales tax revenues. There are currently 52 spaces in this area, and now there will be 342 spaces, that's a big shot in the arm for economic development."

Mayor Stephanie Orman praised city staff for their work on the lease, saying the city had done its due diligence.

The council also unanimously voted to condemn a structure at 1703 S.E. E St. The house has been abandoned for several years with a fire causing damage to the roof and exterior areas, according to a letter Lance Blasi, city chief building inspector, sent to Orman. The structure also has been vandalized, Blasi wrote.

The council also unanimously approved ADB to install about 1.5 miles of fiber and associated gear from the municipal complex, 3200 S.W. Municipal Drive, to Substation F by the Walton Crossing Apartments. The cost would be $251,673. This is the first installation of the city fiber plan, Griffin said.