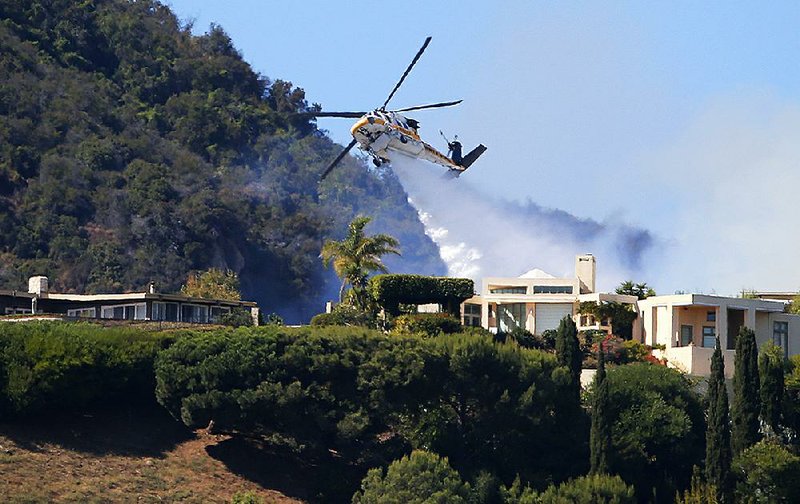 A Los Angeles County Fire Department helicopter drops water Monday as flames from a wildfire threaten homes on a ridgeline in the Pacific Palisades area of Los Angeles.

LOS ANGELES -- A furious firefighting air and ground attack beat back a blaze Monday as it raced up canyon walls toward multimillion-dollar ocean-view homes on a ridge in Los Angeles.

The wildfire broke out around 10:30 a.m. in the affluent Pacific Palisades neighborhood, and flames churned uphill through green trees and dry brush. About 200 residences were under evacuation orders.

Helicopters made strategic drops as the fire burned fences and lawn furniture behind large houses at the top of a bluff. Airplanes eventually joined the battle, dropping lines of retardant to keep flames from spreading into a state wilderness park.

Many residents evacuated from the hillside community west of downtown Los Angeles, while others stayed behind and used backyard garden hoses to try to protect their homes.

The Fire Department attributed the lack of significant damage to the lack of wind and strong compliance with strict brush clearance regulations.

LANCASTER, N.H. -- A pickup driver accused of causing a collision that killed seven motorcyclists in New Hampshire has been indicted on 23 charges saying he negligently caused the deaths and was under the influence of one or more drugs at the time.

Volodymyr Zhukovskyy, 23, of Springfield, Mass., is to be arraigned by video on Nov. 5. He has been jailed without bail since the June 21 crash in Randolph.

In August, the Federal Motor Carrier Safety Administration said that a toxicology report showed Zhukovskyy was positive for an unspecified drug that made him incapable of driving safely.

Abortion clinic to open near Missouri

FAIRVIEW HEIGHTS, Ill. -- A clinic quietly constructed in southern Illinois to meet demand for abortion services by residents outside the state is preparing to open.

Planned Parenthood of the St. Louis Region and Southwest Missouri said that Wednesday will be the opening day for its Fairview Heights clinic about 15 miles east of St. Louis.

Planned Parenthood officials say Illinois is well-positioned to serve as a health care hub for the region.

The clinic's construction began last year, but details weren't released until near completion to avoid protesters and potential construction delays.

Neighboring Missouri is among several states to pass new abortion restrictions in the hope that the U.S. Supreme Court will eventually overturn Roe v. Wade.

BOSTON -- Four more parents pleaded guilty on Monday in the college admissions bribery scandal, and a Texas man accused of helping to orchestrate the scheme also agreed to reverse his plea and accept guilt.

Martin Fox, the president of a private tennis club in Houston, also agreed to plead guilty by Nov. 20 in a deal that prosecutors announced Monday. He is charged with racketeering.

Fifteen other parents previously pleaded guilty as part of plea agreements. Prosecutors agreed to request lighter sentences for those parents since they took responsibility earlier. But the four new parents had no such deals.

Out of 10 parents sentenced so far, nine have been dealt prison time, with terms ranging from 14 days to five months. Another 15 parents are fighting charges tied to the scheme. 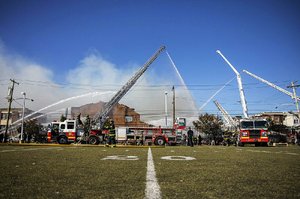 Photo by AP/The Philadelphia Inquirer/TYGER WILLIAMS
Firefighters work to put out a blaze that ignited Monday in Philadelphia.