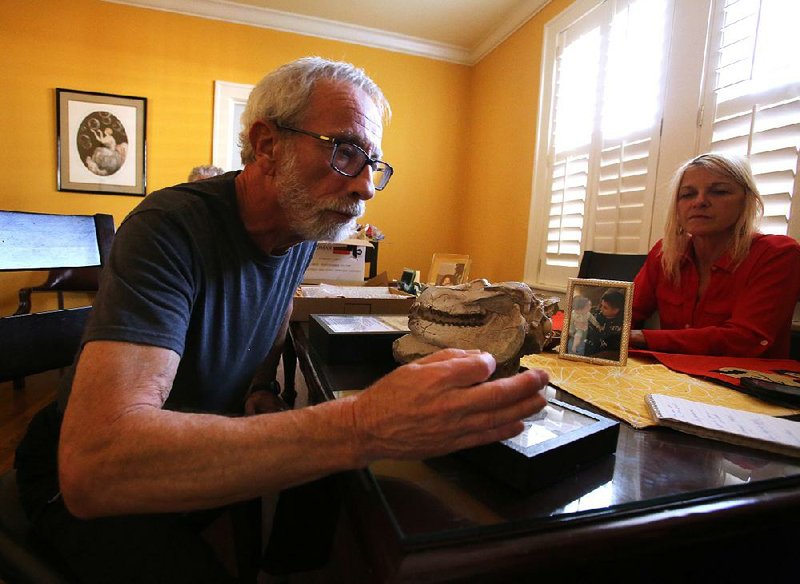 Roger Perkins (left) and Gwynn Shafer show fossils Saturday similar to those taken when their trailer was stolen last month outside of Perkins’ home. - Photo by Thomas Metthe

When someone drove off with Gwynn Shafer's trailer last month, they probably didn't know they were hauling away 70 million-year-old dinosaur eggs.

Of course, it wasn't just ancient eggs in the trailer that was stolen from the 200 block of Little Rock's South Martin Street on Sept. 27, Rodger Perkins said. There were also skulls of the perchoerus, a pig-like mammal that is one of the rarest of fossils; the dog-like cynodictis; and the marine reptile keichousaurus among the $20,000 worth of fossils and petrified wood in Shafer's trailer.

According to a Little Rock police report, the trailer was stolen sometime after 9 p.m. on Sept. 27. The trailer was an enclosed model with "Little Rock" in red lettering on the outside, the report said.

Perkins, Shafer and Paul Yumlu had packed and stacked the fossils into the enclosed trailer and locked the door in preparation for the Oct. 5 Greater Little Rock Gem, Mineral and Jewelry Show. But when Shafer woke up on Sept. 28, the trailer was gone.

"The sad thing was the trailer was full and ready to go," Shafer said. "They just took it all."

Three weeks have passed since the trailer's disappearance, and Yumlu said the three are prepared to offer $2,000 to anyone who can lead to the recovery of the fossils. People with information can reach Yumlu at [email protected]

Perkins said he doubted whoever took the trailer knew they were hauling away fossils predating humans, but said each of the items had a price tag on its container. So the thieves, he said, likely know the value of their find.

The three people differ in occupation -- Shafer is an X-ray technician, Yumlu a plumber and Perkins a senior computational scientist for the Food and Drug Administration -- but are united in their love of paleontology, archaeobiology and the study of ancient life.

Together the three collect and sell fossils from as far away as China, Russia, Madagascar and Germany. Shafer and Yumlu attend the exhibitions, Perkins said, while he prefers purchasing the rarities.

Perkins began collecting and selling fossils more than 20 years ago, saying he was sparked into the hobby by his biology classes when he trained to be a nuclear engineer.

There's a great difference between studying fossils as a hobby and becoming a purveyor of the ancient items, Perkins said.

"I don't know how that leap took place exactly," Perkins said. "... All my life I've believed anything worth doing is worth overdoing."

Speaking at his home Saturday, which is decorated in part with ancient creatures dating back millions of years, Perkins said each fossil is brought to life again through hours of hard work and attention to detail. Each fossil, Perkins said, is indicative of a movement in history and a step toward present life.

"Evolution is the organizing principle of all biology," Perkins said before describing the billion-year processes between Earth's oxygenation via cyanobacteria to the first vertebral life and to today.

Shafer said she became passionate about fossils when she held a trilobite -- a long-extinct marine arthropod -- in her hands one day.

"[Yumlu] picked one up and walked over to me and told me to hold it and said, 'Guess how old this is,'" Shafer said. "Of course it was like 400 million [years] because trilobites are some of the oldest, and that was it. It was over."

She started digging for fossils with Yumlu in Florida before moving to Arkansas, where she met Perkins and they struck up a partnership.

"When I showed those fossils to Gwynn, I was just as amazed as she was," Yumlu said. "... Mother Nature is the first and greatest artist, and she takes her time."

The Jacksonville showing is one of the few local exhibitions the trio attend, with the majority of their displays being in major fossil showcases across the nation. Perkins has also displayed his fossils at the Museum of Discovery for National Fossil Day and sold pieces to museums across the continent from his website, fossilhall.com.

Among the fossils in the trailer were a pair of baby rabbits that had curled up together and died more than 15 million years ago, Perkins said.

"They were snuggled together," Perkins. "It's truly unique."