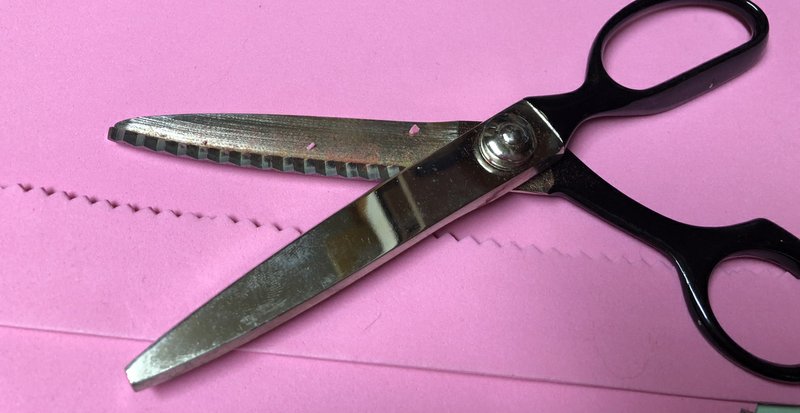 Pinking shears and some pinking they did. (Arkansas Democrat-Gazette/CELIA STOREY)

When I'm reading, I often come upon a word or phrase that distracts me because I wonder where it came from. No wonder I take so long to finish a book.

Ball of wax. This phrase is defined in different places as an affair, a concern, a set of circumstances. I had a slightly different impression of the word. I thought of it as the whole range of choices.

I got a new Jaguar with all the premium add-ons. I went for the whole ball of wax.

It has been used since 1832, even before Jaguars were designed. Unfortunately, no one online had a definite idea of the origin of ball of wax. One guess was that it's a slurring of "whole bailiwick." Today, we use "bailiwick" to mean someone's expertise. Originally, a bailiwick was the area a certain bailiff was in charge of. Somehow bail became ball and wick became wax.

How's that for circuitous?

Noodling. This is an informal word meaning at least two things. It could be playing around on an instrument, sort of like the musical version of improvisation. The other is to think about something casually. What should I have for lunch? Do I still have leftover quiche?

The origin of this word had me ricocheting all over the Internet. In an Oklahoma newspaper, I learned that one meaning was related to fishing. A person who searches in an underwater nest for catfish is noodling. I hope no one has tried noodling piranhas. Apparently, noodling is called other things in places outside Oklahoma.

The musical noodling is common. The wobbly nature of a noodle is a fun description of the places that unstructured play of notes might go. I'm not musical, so the noodling I do is limited to organizing closets.

Don't confuse this with canoodling, which means to cuddle. And don't try to canoodle a catfish, please.

Pinking shears. These are scissors usually used with sewing. They create a zigzag pattern in material. This helps to stop the material from raveling or unraveling (yes, the two are synonyms.) Normally, nothing pink is essential to this action.

Pinking is also a verb meaning "to pierce or stab." I have never heard that verb used.

Honest fraud. All right, this one is a bit off-topic. I don't wonder about the origin, but I do wonder how fraud can be honest. I heard this phrase in the recent news about parents paying lots of money to help their kids get into college. The legal term describes when someone is deprived of honest services. Usually, it includes someone offering a bribe, someone accepting a bribe, and a third person being harmed by that deal.

Ixnay. This means to stop something or to nix. It's a word from Pig Latin. You read that right. That's the allegedly secret language you learn as a kid so you can talk to your friends in front of a younger sibling. The language has simple rules. Take the first letter of a word, put it at the end of a word, then add an "ay" at the end. No need to worry about conjugation or anything. Also on the plus side, writing poetry in Pig Latin is effortless because every word rhymes.

I don't know why I always need to add this, but here goes. Ixnay the use of Pig Latin in formal documents.

Wardrobe. Your selection of clothing is your wardrobe if you live in the United States. In England, a wardrobe is a clothes closet. This is another word with a twisty history. English borrowed the word from the French word "garderobe." The "garder" came from the same place as the words "guard" and "ward." The "robe" part came from words meaning "rob." And that's because the farther back root for "robe," from Old High German, means "spoils" or "looted clothing." As I said, twisty.

Shibboleth. The American Heritage Dictionary defines a shibboleth as a "word or pronunciation that distinguishes people of one group or class from those of another." This immediately made me think of how people with a Boston accent say they "parked the car in Harvard yard," though with all those r's replaced with h's.

The origin of this word turned out to be fascinating. It comes from the Book of Judges in the Bible. In Israel, the Ephraimites battled with the Gileadites and were kicked out of their land. Any time an Ephraimite tried to slip back into the territory, he or she (I'm pretty sure they were all men) was asked to pronounce the word "shibboleth," a Hebrew word meaning "stream." The Gileadites said "shibboleth," but the Ephraimites pronounced it "sibboleth." Busted. It later was brought into the English language as a test phrase. And it has come to mean a saying, a belief, a truth or a platitude.