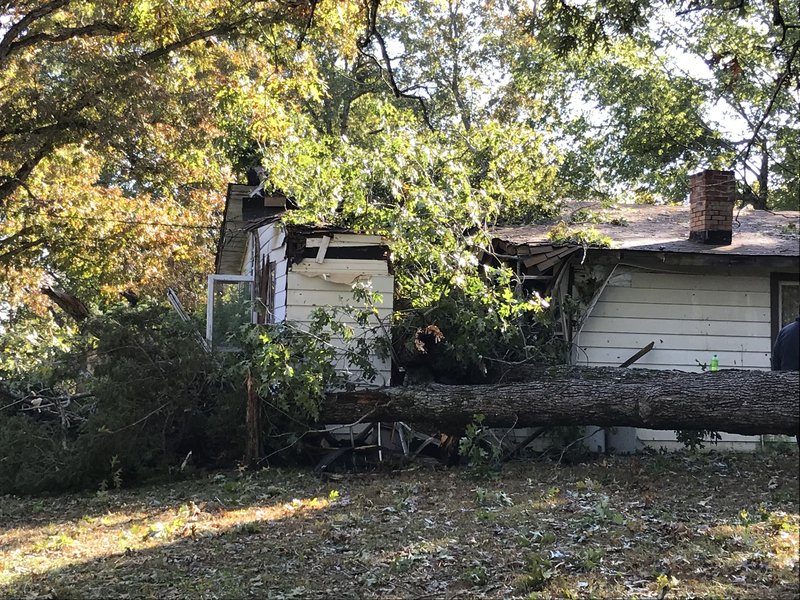 A large tree in a home at Pleasant Ridge Road in Benton County. A man was killed in the home. - Photo by David Gottschalk

Benton County Judge Barry Moehring signed an Emergency Declaration on Monday because of the severity and broad damage of the storm.

“Given the property damage I’ve seen from touring the impacted areas, I believe a declaration is appropriate,” Moehring said. “If the monetary damages of the storm are significant enough then we’ll be able to receive additional assistance for repairs.

Moehring’s declaration allows Benton County and affected cities to request assistance from the Arkansas Department of Emergency Management for un-insured public sector damages attributed to the storm and repair structures to pre-disaster conditions.

The National Weather Service confirmed that the high speeds winds were attributed to at least one tornado and straight line winds, Robert McGowen, the county’s public safety administrator.

McGowen said Monday afternoon that 16 roads remained closed because they were waiting on the power company to remove fallen lines from the roads.

A Benton County man died early Monday when a tree fell on his home during a a heavy thunderstorm, according to Rogers Fire Chief Tom Jenkins.

Rogers firefighters responded to the scene, but it was outside the city, he said.

Benton County Coroner Daniel Oxford said his office was called to the residence on Pleasant Ridge Road at 1:01 a.m. Monday.

Oxford said a large oak tree had fallen on the home and the ceiling had collapsed under the weight of the tree. Oxford said the man was found beside a couch in what appeared to be the living room.

Pete Snyder, a National Weather Service meteorologist in Tulsa, said the storms that hit Northwest Arkansas overnight may have contained tornadoes but that determination has not been made officially. Snyder said crews are expected to be on the ground in the area later today (Monday) to inspect damage and try to determine the strength and path of the storms.

IDrive Arkansas reported Arkansas 264 from Cave Springs to Highfill is closed because of a downed power line as well as Arkansas 112 from West Pleasant Grove road to Brown Road. A full list of road closures is attached.

About 16,000 residents are without power in Washington, Benton and Carrol counties as of 10:50 a.m., according to electric company reports.

Two commercial sites -- a strip mall at Eighth Street and New Hope and O'Reilly's at Eighth -- were damaged from the storm, Jenkins said.

Storms caused significant roof damage at Rogers High School, said Charles Lee, assistant superintendent for general administration. Part of the roof on the campus’ main building off of Dixieland Road peeled off, and rain caused water damage in some of the classrooms, he said.

Storms also caused roof damage at the indoor field house at Rogers High School, knocked over a flag pole at the football stadium and blew portable bleachers onto the football field, Lee said.

Lee said the district does not plan to cancel school Tuesday.

Rogers New Technology School on First Street was the only one of the district’s buildings without electricity as of about noon. The district expects the electricity to be back on today, Lee said.

At the Northwest Arkansas Regional Airport, there was minor damage but the big problem was no power Monday morning, according to Kelly Johnson, chief operating officer. Generators are being pressed into service at the terminal.

Authorities in Poinsett County have also asked the weather service to survey wreckage caused by strong winds that hospitalized two and brought significant damage to the Tyronza area.The two were hurt when a service station was nearly “leveled” by storms shortly before 6 a.m., Poinsett County Sheriff Kevin Molder said. The sheriff said he didn’t immediately know their condition.

Elsewhere in the town, the East Poinsett County School District cancelled classes after a school building was “heavily damaged,” according to Molder. The town also reported several trees had fallen on houses and power lines had been downed, though officials were still assessing the extent of the damage. 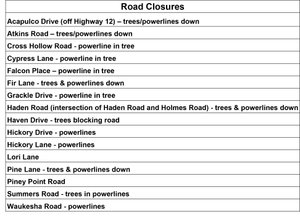