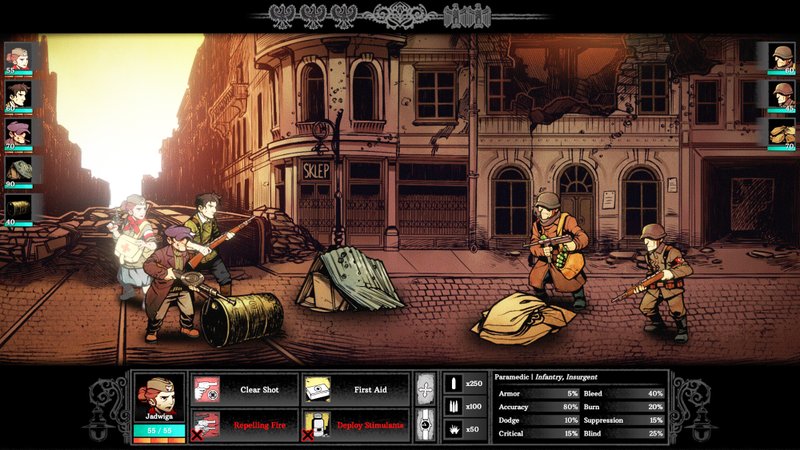 Set in 1944 during the Nazi occupation of Poland, Warsaw tells the story of a ragtag band of resistance fighters aiming to overthrow the Germans and reclaim their home city. Anyone moderately familiar with the history of that time knows that uprising was rather ill-fated, and that's exactly the feeling Warsaw-based Pixelated Milk gives players with this tactical, turn-based game.

In the true story of events, the Polish Home Army, despite being overwhelmingly inferior in battle capacity, launched an operation that was supposed to coincide with an attack by the Soviets' Red Army to liberate the Polish capital. The Soviets, however, never came, and after the Nazis crushed the uprising, they razed Warsaw.

Warsaw is ultimately a game of hope set amid hopelessness, the story of men and women who refuse to give up.

Like a fair number of games coming out recently, Warsaw's combat mechanics are heavily inspired by Darkest Dungeon's 2D, side-view combat, where available fighting abilities depend on the positioning of your troops. As in Darkest Dungeon, you'll go into battle with four soldiers or support troops, each with various, customizable skills and period-authentic weapons. Unlike Darkest Dungeon, in addition to often being outnumbered by the enemy, combat complexity is increased, with two parallel rows available to fight in, along with obstacles that can be used as cover.

Warsaw also seems to have taken some inspiration from This War of Mine, which is a game about making hard choices as civilians try to survive in a combat zone. As commander of this band of fighters, every decision you make is a dilemma. Various zones around the city are under siege and have missions available, but your team can only resolve one, which means other missions automatically fail, often with game-changing consequences.

Warsaw is also a "roguelike'': When your fighters die, they're permanently gone. The game comes with a limited number of "named" fighters — special units that can be leveled up and become part of the narrative. Additional troops can be obtained, but they're sort of temporary members — useful, but they won't get more powerful over time and fulfill niche roles.

Whenever possible, Warsaw reminds the player of the reality that war is hell. An especially poignant moment was when I realized that the new fighter sent to reinforce my units was just a boy, who liked to play with a train set between missions.

During the game, your unit will run around the streets of Warsaw in a top-down map view, finding supply boxes, completing mission requirements and fighting (or avoiding) enemy patrols.

In a game where ammunition is scarce and permanent death stalks every encounter, I recommend avoiding fights whenever possible. The combat in Warsaw is quite a bit more complex than in Darkest Dungeon. Your named units come with skills unique to them, and leveling up a unit (by completing missions) unlocks more skills. Various weapons can be equipped, and each weapon also unlocks skills. Units can only equip four skills at a time, though, so tactical planning is required.

Combat is a bit random, as in random number generation, or RNG. You'll see, for example, that a soldier has a certain chance of hitting an enemy unit, but various buffs (power increases), de-buffs (power decreases) and cover can affect aim.

There is a combat-assist in the game — if you miss a shot, the chance you'll land your next shot rises by 30%. That can make unlucky streaks less punishing. This is a common mechanic in games with similar combat, such as X-COM, although in that game, higher difficulties can be selected that disable invisible assists.

Warsaw is already pretty challenging, though — enough so that a post-release patch made the game a bit easier by reducing enemy health, making guns use less ammo and lowering the number of enemies that can appear on the battlefield.

Also, each time the game is played through, the skills units received and the order in which they are unlocked, as well as narrative events that occur, are randomized, so no two playthroughs will ever be exactly alike. Between missions, narrative encounters happen that can help or hurt your team. Success could mean a new weapon, supplies or a fighter joins your squad. Failure can mean someone dies.

Visually, Warsaw accomplishes its mission perfectly. The art is all hand-drawn, and troops wear authentic uniforms and other clothing. It's depressing as hell, of course, but it's meant to be. The backgrounds and music capture that historic, desperate feel.

The game is punishingly tough to the point I'm not even sure yet if it can be beaten. Are we even supposed to be able to win? History says the Home Army didn't, but as long as we remember the heroism and sacrifice, that sounds like something of a victory to me.

A copy of Warsaw was provided by Pixelated Milk for this review.