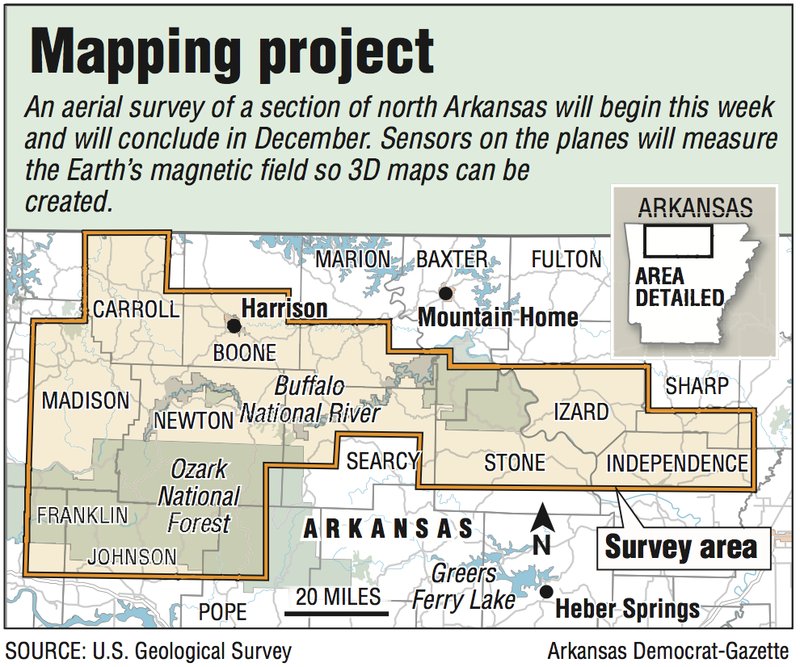 An aerial survey of a section of north Arkansas will begin this week and will conclude in December. Sensors on the planes will measure the Earth's magnetic field so 3D maps can be created - Photo by Arkansas Democrat Gazette

Two low-flying Piper Navajo airplanes are scheduled to begin crisscrossing north Arkansas this week measuring variations in the Earth's natural magnetic field, as well as soil and rock chemistry on the surface.

The data will be used to create three-dimensional models and maps that show geological features on the Earth's surface and to depths of several miles below, according to a news release from the National Park Service.

The information can help scientists understand the distribution of groundwater, mineral and energy resources, as well as the potential for natural hazards.

The survey will include parts of 15 Arkansas counties.

"The Arkansas survey will be a large geophysical survey, not only covering a big area of Arkansas but also collecting a lot of geophysical data," said Anne McCafferty, research geophysicist with the U.S. Geological Survey in Denver. "The planes will fly over 41,000 miles, collecting magnetic and radiometric data that will cover about 9% of Arkansas."

The Arkansas survey is one of two airborne magnetic and gamma-ray surveys that EON Geosciences is conducting under contract with the U.S. Geological Survey, McCafferty said. The second survey covers parts of Illinois, Kentucky and Indiana.

She said three other large airborne geophysical surveys are underway -- over South Carolina, Alaska and California.

For the Arkansas survey, the airplanes will be based at the Branson Airport in Hollister, Mo.

The project is part of a national effort to gather modern, high-resolution airborne magnetic and radiometric data. The survey will replace lower-quality geophysical data, collected mostly in the 1980s, that is of limited use for geologic mapping, according to the release.

"We flew our first survey back in 1945 and since then, have conducted geophysical surveys over the entire country," she said. "A recent effort on the part of our geophysics group has been to rank these surveys in terms of their quality to help with geologic mapping. The upshot of that effort showed only 5% of the conterminous U.S. has data sufficient to contribute to quality geologic mapping.

When asked if these surveys will continue to cover the entire country, McCafferty said that depends on funding. The project is in its second year, having recently completed surveys of Missouri and South Carolina.

A magnetic sensor will be mounted on the airplane's tail stinger. It will measure variations in the Earth's magnetic field that are created by different rock types up to several miles beneath the surface of the Earth, according to the news release.

Each plane will also include sensors inside that measure soil and rock chemistry at the surface of the Earth.

None of the instruments carried on the aircraft pose a health risk to people or animals, according to the release.

The northern Arkansas survey will be flown at elevations of about 260 to 1,000 feet above ground. The flights will be in a grid pattern along north-south flight lines spaced about 650 feet apart and east-west flight lines about 9,800 feet apart. All survey flights will occur during daylight. 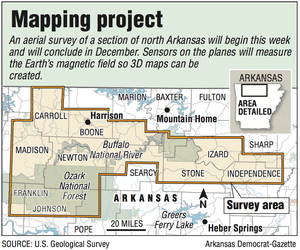