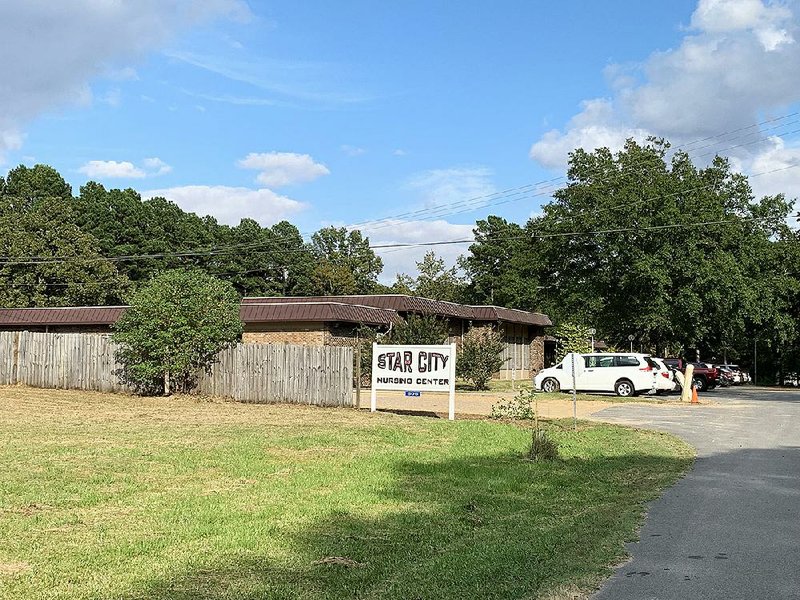 Lincoln Heights Healthcare in Star City is one of five nursing homes the Department of Human Services took over through the "receivership" process since Sept. 30. - Photo by Eric Besson

But the five properties seized by the Department of Human Services did not attract financial scrutiny from regulators until last month, even though the owners owed more than $560,000 in unpaid fees and penalties.

By the time the state intervened, more than 100 staff members had gone unpaid, utility companies had issued shut-off notices, medical supplies were on the brink of exhaustion and cash balances were gone, according to court records that the state filed to take over the homes. The homes are licensed to house a combined 466 residents.

In the wake of the takeovers, the Arkansas agency that licenses nursing homes, a Medicaid fraud investigator and industry lobbyists are working on a package of new policies, rules and laws aimed at reducing blind spots and providing earlier crisis detection.

"We want to make sure people who run nursing homes have sufficient funds," Lloyd Warford, the deputy attorney general who oversees the state's Medicaid Fraud Control Unit, said during a lightly attended rally for nursing home residents' advocates this month.

"We're expecting [the state] to change rules and improve definitions. But if things bog down, we're going to need you to show up," Warford told the advocates.

The new focus comes after Arkansas took nursing homes into "receivership" for just the second time since the 1980s.

Official attention to early warning systems follows an Arkansas Democrat-Gazette investigation in April that found that the state had taken no steps to improve how it screens owners who want to acquire nursing home licenses after the 2018 collapse of New Jersey-based Skyline Healthcare. Skyline held one in every 10 licensed nursing home beds in Arkansas, and its financial collapse prompted the state to take over two of its properties.

The Human Services Department, over Warford's objections, approved the transfer of Skyline licenses to two firms with business or management ties to Skyline. The state also allowed an Atlanta man with an $83.1 million federal civil fraud judgment against him to acquire one of Skyline's licenses, the newspaper found.

Warford, in response to emailed questions, called the national Skyline crisis an "eye-opener to Medicaid fraud investigators across the country."

"We are committed to take whatever steps are necessary to prevent another system failure of this magnitude," he said.

"As we found out with these five [nursing homes] -- and perhaps before with Skyline -- finances are a leading indicator for problems," Sharum said in a recent interview. "If you can't pay for supplies, the next step is a decline in care. We're now very attuned to those issues."

The state plans to propose new farther-reaching rules and laws after discussing ideas with the attorney general's office, the nursing home lobby, residents' advocates and others, Webb said.

Officials began monitoring Head's facilities Sept. 23 after noticing a Facebook post about payroll issues at one of the nursing homes and registering it as a formal complaint, Sharum said.

Inspectors found similar and severe issues at each of the homes -- vendors threatening to stop delivery, payroll checks bouncing and utilities issuing shut-off notices -- and the state petitioned circuit judges in five counties to give it temporary control of the facilities.

Judges signed orders between Sept. 30 and Oct. 3 allowing Arkansas to take over the homes, initially for a period of 30 days. The orders can be extended.

Reliance Health Care is managing the facilities on behalf of the state.

When Arkansas first filed petitions, it seized only two homes, though Sharum said at the time that the plan was to next take over the other three "unless something miraculously changes."

Head's attorney, Sean Mathis, on Oct. 2 requested that the state file receivership petitions for the other homes, according to an email he provided. The state filed court papers the following day.

As set by state law, the goal for receivership is to get nursing homes on stable footing and then return them to the owner, Sharum said. The state can petition judges to order Head to sell the licenses, but it has not done so.

Head will "do whatever is best for the residents and the employees at those facilities," Mathis said when asked whether Head wanted to regain control of the facilities.

The homes held a combined 267 residents as of Sept. 27. By Oct. 9, that number had dropped to 252, or about 54% of capacity, according to figures Webb provided.

Head holds 75% of the companies licensed to operate the five homes, according to state records. The records list Parsons as holding the remaining 25% of each company.

Parsons, in a lawsuit filed against Head late last year, said she has not been involved in the nursing homes since the spring of 2018.

Parsons' lawsuit is among several court filings in plain view, over a period of years, concerning purported financial turmoil at their nursing homes.

The suit accused Head of not repaying hundreds of thousands of dollars that the nursing homes and another Parsons-owned company loaned to their shared facilities.

Head's response to Parsons' lawsuit denied many of the allegations but did not "admit or deny" the transfers.

Parsons told Head in March 2018 that she would stop supporting Hope Healthcare and the other nursing homes they co-owned, according to the lawsuit.

Head's response to the suit said that Parsons no longer held interest in companies they formerly shared, but did not say when they split. State records do not reflect any changes in ownership interest.

In April 2018, the landlord of a nursing home the pair was licensed to operate in El Dorado accused Head of not paying rent dating back to June 2017 -- putting Head $550,000 behind, according to a different lawsuit.

Head sold the license to operate what was formerly called Grace Point -- now known as Advanced Health and Rehab of Union County -- to a replacement firm picked by the landlord, according to an order signed by a circuit judge.

Parsons signed the change of ownership documents for that transfer, which was processed in October 2018, according to copies obtained under the Arkansas Freedom of Information Act.

Mathis, Head's attorney, said the court order stemmed from a settlement agreement and was the "quickest and most effective way" to transfer ownership of the license.

Changes of ownership are reviewed and approved by the Human Services Department. Sharum said the department was unaware of financial problems at the nursing home until last month, though he said officials have since surmised that the issues percolated for years.

Several vendors filed lawsuits against the nursing homes for unpaid bills. A food-service vendor sued for nearly $160,000 in unpaid bills in 2017, and a medical equipment supplier sued for more than $180,000 in 2016, for instance.

Deerview, the Ola facility, was habitually late on its water bill payments and then bounced a series of checks beginning in July, which prompted a shut-off notice, said Betty Bly, the city's treasurer.

The Human Services Department's longer-range review is focused on improving oversight during ownership changes and on paying specific attention to finances, Webb said.

"One of the most important parts of these reforms will be the identification of financial factors relevant to the ability of a facility to provide appropriate care for its residents and the standards used to evaluate those factors," Webb said.

The department wants to pin down what signals future problems and then use that knowledge when weighing ownership changes, inspecting existing nursing homes and deciding whether to "trigger increased monitoring," she said.

New rules and laws likely will be needed to give the department the authority it seeks to ensure stable nursing home ownership.

The change-of-ownership process, for example, allows the state to require a "broad range of evidence" as officials consider whether the applicant meets state rules and regulations, Webb said, but it allows the state to deny applicants based only on a narrow set of reasons.

"No grounds are provided to deny applicants who have loads of debt or poor financial histories," Webb said of the state law, Arkansas Code Ann. 20-10-224.

The law allows the state to consider only whether executives have been convicted of a felony, whether other facilities they own committed serious long-term-care violations, whether they have had a license revoked previously and whether their other nursing homes have been in "substantial compliance" with state and federal law.

"As a profession, the vast majority of our providers try to do the very best that they can, and the association wants to see viable operators in Arkansas that are here that provide excellent care," Bunch said in an interview. "We want the regulatory environment to support that, of course."

The point of the potential financial-based surveys would be to look for cash flow issues that can hurt care. Asked how this was different from existing health and safety surveys, which focus on the quality of care, Webb said it would specifically "evaluate financial records."

Such an analysis "could require technical assessment of financial issues, accounting practices, and complex operating and ownership structures," she said.

Lincoln Heights in Star City and the other four homes seized by the state were cited for a combined 87 health and safety violations from August 2018 through August 2019, an average of more than one per home per month, according to a review of records provided by the Human Services Department.

Of those, 35 were violations that represented "substandard quality of care," according to the federal Centers for Medicare and Medicaid Services' grading system.

The five most serious were coded as J, or an isolated case of immediate jeopardy to health or safety.

Four of the five stemmed from an investigation Aug. 1 at Deerview that found a nurse had injected a resident with insulin against the person's wishes. Residents are allowed the right to refuse medication.

Deerview also failed to immediately investigate or report the alleged violation, which a state monitor determined was "staff-to-resident abuse."

The other 30 "substandard" violations were F's, which means the potential for more than minimal harm at a widespread scale. Many of these concerned lapses in fire control systems, such as regularly testing the alarms, inspecting equipment and making sure emergency doors worked properly.

Two of the nursing homes have three-star overall ratings, one has a two-star rating and the other two have one-star ratings. More stars are better, and three is the average statewide.

The ratings are based on health inspections, staffing and quality-of-care measures such as hospitalizations and use of anti-psychotic medication.

Citing resident privacy, the Human Services Department denied this newspaper's request to tour Lincoln Heights or any of the facilities under state control. 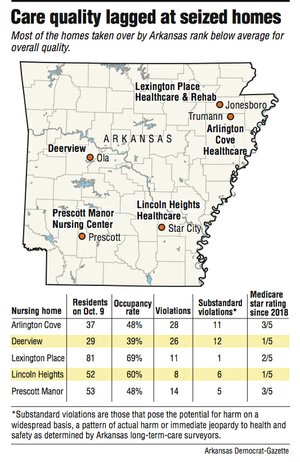