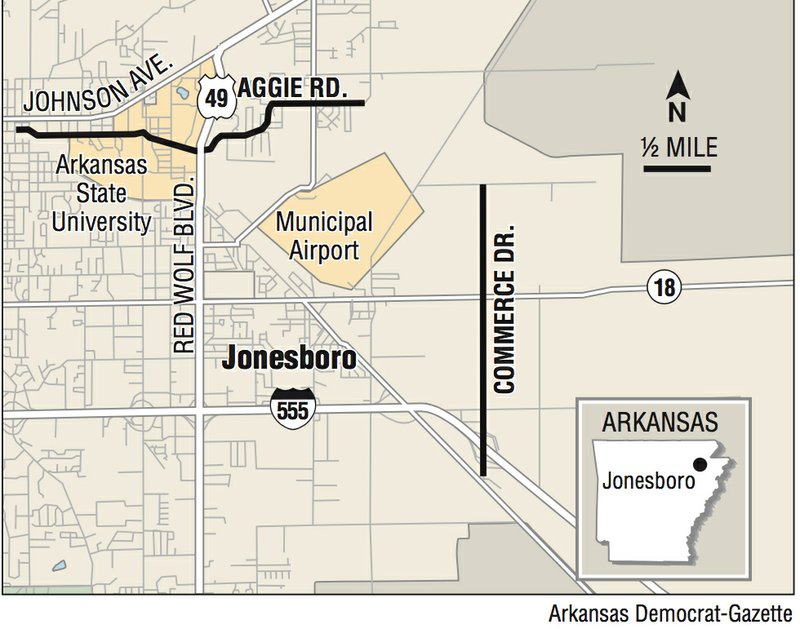 A map showing the location of Jonesboro and Arkansas State University.

A Jonesboro committee decided not to name any city roads after Martin Luther King Jr. and instead opted to place memorial highway markers along a street in the southwest portion of the city.

The City Council created the Unity Coalition Advisory Committee in June and tasked the group with finding way to honor King, but the city's public works committee opted Tuesday to change the group's proposed ordinance.

The Unity Coalition Advisory Committee gave the City Council two options: rename either Aggie Road through the Arkansas State University campus or Commerce Drive, a north-south spur of Arkansas 18 that is scheduled to be upgraded to a four-lane eastern bypass.

The public works committee decided Tuesday to move forward with Commerce Drive. But the proposed ordinance was adjusted to only change parts of the eastern arterial from Interstate 555 to U.S. 49 that aren't built yet. The streets that already carry the name "Commerce Drive" wouldn't be changed under the ordinance.

"This way no business or factory on that street would have an objection to that," Council Member Chris Moore said at the meeting. "Because they will still be able to receive mail at their original address, and the stationery wouldn't need to be changed."

Debates broke out at City Council meetings between Jonesboro residents who want to honor King by renaming a street after him and those who are concerned about preserving Jonesboro's history.

Bill Campbell, a spokesman for the city, said the status of the proposal is in flux.

"Something will shake out next meeting," he said.

Sandra Combs, a member of the advisory committee, said in an interview that she objected to the decision by the public works committee.

"I just don't know if they can hear," Combs said. "They totally disregarded the unity committee's recommendation."

Emma Agnew, president of the Craighead County NAACP and a committee member, called the entire process a waste of time.

"They didn't even give us the respect of voting on the ordinance," she said. "They just changed it to what they wanted all along. We never discussed a memorial highway, not even once."

Agnew said the idea of a memorial highway frustrates her because that could have been done on Johnson Avenue, the original street in the name-change discussions. The avenue covers almost 7 miles of U.S. 49 and Arkansas 91.

She said her chapter of the nation's oldest civil-rights organization will request that the ordinance be tabled indefinitely because there is no construction date set for the Commerce Drive extension.

"If this idea goes through, then we would have nothing," she said.

The fight to get a street named after the civil-rights leader has been discouraging, Agnew said.

"When the black community and its supporters request a street named after Dr. King, it's more than a street," she said. "It's about community, pride, honoring the marginalized, knowing our voices are being heard and seeing progress. When a community fails to see that then it fails all the things I mentioned. We see no progress. No sense of community."

Opponents said they don't want to change the name of any Jonesboro street because of the history attached to those names.

"It has been a fairly stressful few weeks," Gary Tate, an advisory committee member, said in a previous interview. "I have been called a racist and a liar by people from all over. They don't know me, though."

Tate said he received calls expressing support on his stance to not rename a street.

Combs said she believes there are deeper issues behind the blowback.

"It's disappointing, and it shows the amount of racism and bigotry that is in this city," she said. "I have been here for years, but I didn't believe it was to this magnitude. There are a lot of people with hard hearts."

The issue will go before the City Council for its second reading Nov. 5, and members will vote on it after a third reading.