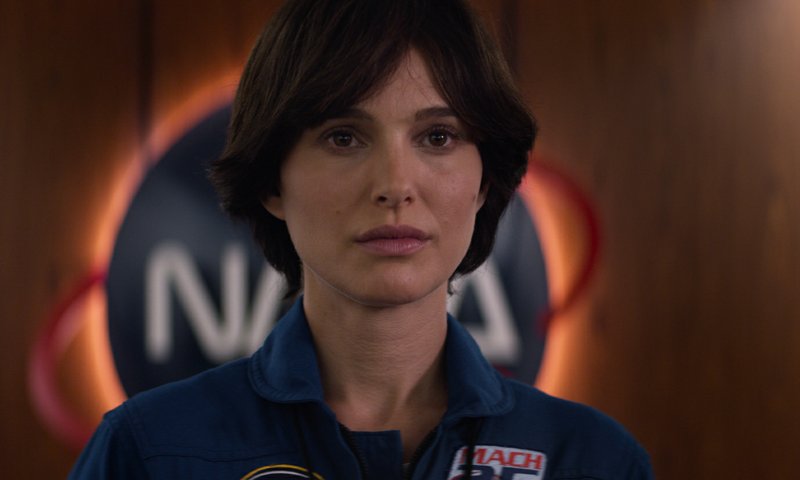 Lucy Cola (Natalie Portman) is an astronaut with an unhealthy obsession with a co-worker in Noah Hawley’s Lucy in the Sky, which is loosely based on the 2007 incident in which an astro- naut attacked an Air Force officer she saw as a romantic rival.

It's hard to know why anyone thought Lucy in the Sky, a drama about an astronaut's fall, would make a good movie. Was it the appeal of outer space, with its beauties, mysteries and infinite possibilities? Or was it the faintly exotic if rather basic romance that blows up so many lives? Was it the diapers?

Inspired by real events, as movies like to say, Lucy selectively draws on the bleak story of Capt. Lisa M. Nowak, an astronaut who earned national notoriety in 2007 when she was arrested after attacking Colleen Shipman, an Air Force captain she saw as a romantic rival. Nowak was charged on several counts, including attempted kidnapping and later, with attempted murder. It was wild and weird. She had gone full-on Jason Bourne for the attack, dressed in a wig and a trench coat, and armed with a BB gun, a steel mallet and a buck knife. But all that anyone cared about were the diapers she said she wore on a long, futile drive the night of the assault.

Lucy in the Sky

Some of this makes it into Lucy in the Sky, which takes curious liberties (no diapers) with the real story to not much point. Its main draws are Natalie Portman, who plays a sympathetic variation on Nowak called Lucy Cola, and Jon Hamm as her swaggering heartbreaker, Mark Goodwin, another astronaut. In their shared and individual scenes, these nicely synced performers create an emotional and psychological foundation for the story that holds your attention even as the rest of the movie collapses around them. It's a dispiriting mess and waste of talent, sunk by a lack of focus, misguided choices and insistently unproductive, at times incoherent clashing tones.

Directed by Noah Hawley, the movie tracks Lucy from her greatest triumph to her desperate breakdown, all while toggling between outer and inner space. She's soaring when you first see her, tethered to a shuttle high above the Earth. (A mission specialist, Nowak flew on Space Shuttle Discovery in 2006.) Enveloped by the immensity that folds her in its arms, Lucy looks small and vulnerable. But she's ecstatic. Flooded with light and complicated feelings that she never manages to articulate, she brings to mind a saint in religious reverie, her eyes and smile as shining, bright and wide as the world.

She soon falls to Earth, of course. Reality is a bummer, and so is her dreary life. With its winter browns and crepuscular lighting, her house couldn't be more uninviting. With his smiles and smothering love, her husband, Drew (Dan Stevens), couldn't be more absurd. He's kind and dull, a beatific cipher in a mustache who seems closely modeled on Ned Flanders, the maddeningly decent, cheery neighbor on The Simpsons. It's almost a surprise that Drew doesn't say "Hi-Diddly-Ho!" at the breakfast table. It's entirely unsurprising when the lost, drifting Lucy romantically fixes on Mark, a hotshot who seems to take his lifestyle cues from 1960s-era Playboy and soon starts eyeballing another (Zazie Beetz).

Hawley throws a lot at the screen, including a gun, a distraction (Pearl Amanda Dickson), a little piquant showboating (from Ellen Burstyn as Lucy's grandmother) and some reductive ideas about women and power. He tries hard to obscure that this is little more than a sad, small story about a mental health crisis. Mostly, though, he keeps shifting from serious to satirical while restlessly toying with the visuals. In a misguided bid at Expressionism, he dramatically shrinks and expands the aspect ratio, pulling it like taffy, and blurs the inner edges of the frame. All this shape-shifting is mildly diverting at first, but what initially looks like aesthetic adventurousness soon registers as confusion, suggesting that he is finally as unmoored as his heroine.

Print Headline: Lucy in the Sky