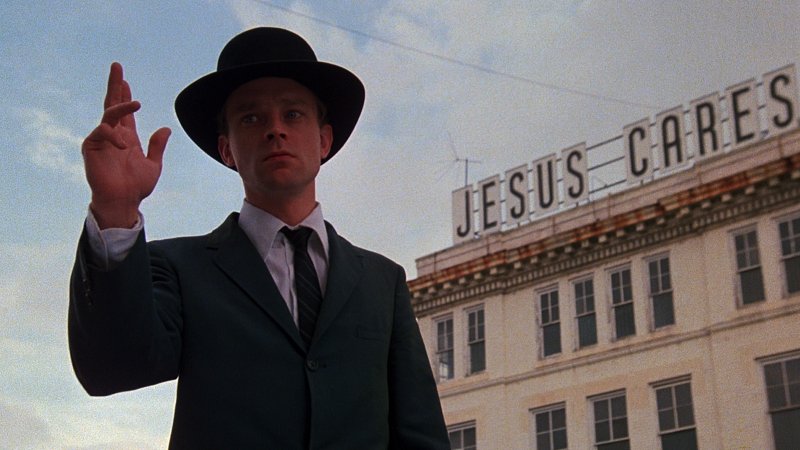 Hazel Motes (Brad Dourif) is a returning war veteran who founds his own church in John Huston’s 1979 film of Flannery O’Connor’s novel Wise Blood. A documentary on O’Connor’s life and work kicks off the Hot Springs Documentary Film Festival tonight.

"Faith is what someone knows to be true, whether they believe it or not."

Have you ever seen Wise Blood?

It's one of those movies that haunts me. I saw it when it came out in 1979, and it felt like a fever dream. For years I wasn't even sure it was a real movie. Then 10 years ago the Criterion Collection released it on DVD and confirmed my memories of it as a rich, dark and disturbing experience.

It was directed by John Huston, who was 72 years old at the time. But it doesn't feel like an old man's movie; it certainly doesn't feel like a capstone to a distinguished career. It feels like a movie that had a hard birth and was patched together on the fly -- a collaboration of guerrillas. The cast is amazing: Brad Dourif, Ned Beatty, William Hickey, Harry Dean Stanton and wonderful unsung character actress Amy Wright.

The movie begins on a winter day, with Hazel Motes (Dourif) returning to his small Georgia hometown after serving in the war. He hitches a ride with a man in a beat-up truck. After Motes observes that he doesn't remember the highway they're riding on, the driver replies that the road is new and it's been there "just long enough for everyone to leave on it."

Hazel is dropped off in front of his family's dilapidated, empty and looted farmhouse. Then he visits a graveyard, to pay his respects to a weedy grave, with an epitaph that reads "Gone to be an angle."

That misspelling does not appear in the source material, the 1952 novel by Flannery O' Connor, but I don't think it was a mistake. I think that Huston, confronted with the daunting prospect of translating an O'Connor narration-driven novel to film, elected to kilter the movie's universe by a few degrees. He knew voice-over would be a disaster, but if he simply allowed his camera to watch characters act out O'Connor's story, he ran the risk of presenting a literal freak show.

So he imbued his mise en scene with strangeness and kept faith with O'Connor's dialogue and plot. We watch as Motes does what O'Connor never did, wander aimlessly into the city "to do some things I never have done before" and be caught up in a desperate career as a faithless prophet, the founder of the Church Without Christ.

Wise Blood is a great film, maybe the last great one of the '70s -- it came out after Star Wars and Jaws, 15 years after O'Connor died. It is a rare example of a great film being made of a great novel.

While I have read most of what O'Connor published in her brief life (she was 39 when she died of lupus, having outlived her doctor's prediction by six or seven years), I know relatively little about her life. I knew she was born in Savannah, Ga. but only because I was also born there. And I knew that she had died but had no idea she had been so young. I knew she was a devout Catholic.

Flannery, the new documentary by Jesuit priest Mark Bosco, the vice president for mission and ministry at Georgetown University, and Elizabeth Coffman, associate professor of communication at Loyola University of Chicago, that kicks off the 28th edition of the Hot Springs Documentary Film Festival tonight, provides an entertaining and insightful remedy to that ignorance.

Which isn't a bad thing for a nonfiction filmmaker to aspire to.

Elsewhere in this section Dan Lybarger talks to the filmmakers of Flannery, who just last week won a $200,000 "finishing grant" as part of the Library of Congress' first Lavine/Ken Burns Prize for Film.

It looks like this will be a very good year for the festival -- along with Flannery, it has the late French master Agnes Varda's final film Varda by Agnes; One Child Nation, which won the U.S. Grand Jury Prize: Documentary at the Sundance Film Festival earlier this year; and For Sama, which won the best documentary award at this year's Cannes Film Festival. I'm particularly excited about the world premiere of Objector, about a young Israeli woman who challenges that nation's compulsory military service.

For Sama director Waad Al-Khateab and One Child Nation co-director Nanfu Wang are both scheduled to be at the festival to talk back to the audience after their films and participate in a joint "fireside chat" about their movies.

Making Waves: The Art of Cinematic Sound, a movie I saw earlier this year at Tribeca Film Festival (and wrote about in this space) is a must-see for anyone interested in the art and science of sound design. Mike Wallace Is Here promises to be provocative and polarizing portrait of a problematic hero; the same might be said for Raise Hell: The Life & Times of Molly Ivins.

I'm looking forward to The Apollo, a bio-pic of the Harlem institution, and Werner Herzog's latest, Meeting Gorbachev.

I'll be surprised by something. I always am, and part of the film festival experience is changing plans at the last minute and wandering into a theater to catch a few minutes of a movie you've never heard of and having that movie colonize your mind, the way Huston's Wise Blood did 40 years ago.