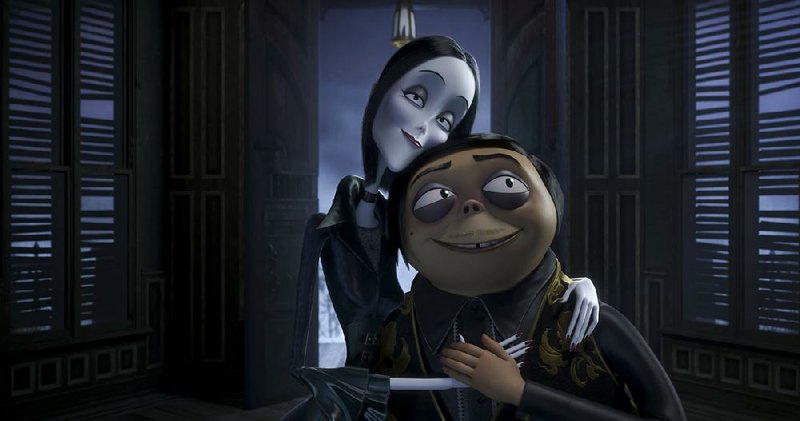 Charlize Theron and Oscar Isaac provide the voices of Morticia and Gomez Addams in the United Artists/MGM’s The Addams Family. It came in second at last weekend’s box office and made about $30.3 million.

It was a good weekend for gloom.

Warner Bros. continued to rake in money with the grave supervillain origin story Joker, which topped the domestic box office Friday through Sunday with an estimated $55 million in ticket sales. The movie picked up an additional $123.7 million overseas this weekend according to the studio, bringing its worldwide cumulative tally to about $543.9 million after only its second weekend in theaters.

The R-rated Joker, which stars Joaquin Phoenix, also left room for the arrival of another, less violently somber movie (with similarly strong Halloween costume potential): The Addams Family. That animated film opened to about $30.3 million in ticket sales last weekend, landing it in second place, above prerelease expectations.

"These are incredible numbers [for Joker] and really reflect how interested and excited people were," said Paul Dergarabedian, senior media analyst for Comscore.

The film had a rollercoaster ride to release, with highs like winning the top prize at the Venice Film Festival and lows when concerns about the film inciting violence made headlines and prompted increased security at many theaters across the country. But audiences have spoken with their dollars and were not going to be deterred, Dergarabedian said.

"It shows that content wins. A great movie will rise up above all the noise over whatever controversy or security concerns there were," he added. "You're totally left out of the water cooler conversation if you haven't seen Joker."

The Addams Family, distributed in the United States by United Artists/MGM, offers a new take on the macabre comics by Charles Addams. Following in the footsteps of past Addams Family adaptations, the computer-animated comedy begins its story with the wedding of Gomez (voiced in this version by Oscar Isaac) and Morticia (Charlize Theron). The plot involves the pair making their home in an abandoned asylum in New Jersey and, years later, confronting a planned-community development that encroaches on the family's deliberately spooky surroundings. The voice cast also includes Allison Janney, Chloë Grace Moretz, Finn Wolfhard, Bette Midler and Snoop Dogg.

The Addams Family was a hit despite lackluster reviews: it currently holds a 44% fresh rating on Rotten Tomatoes. In his review for The New York Times, Ben Kenigsberg wrote that the movie has just enough wit and weirdness to honor its source material.

In third place was Paramount's action thriller Gemini Man, which opened to around $20.5 million in domestic sales according to Comscore, which compiles box office data. That is a letdown given that the movie stars Will Smith, and was directed by Ang Lee. It also cost a reported $138 million to produce.

Gemini Man cast Smith as a retired sniper being hunted by his younger clone, whose appearance is achieved through digital effects. The movie currently holds a 26% fresh rating on Rotten Tomatoes, an unenthusiastic critical response that might have veered audiences looking for star power and violent action toward Joker, which sits at 68%.

Rounding out the top five, Focus Features' Downton Abbey added $4.9 million in its fourth weekend. It currently stands at $152.7 million in worldwide receipts.

In limited release, Neon opened Bong Joon Ho's Palme d'Or-winning Parasite in three locations to $376,264 for a per-screen average of $125,421, the best average at the specialty box office since 2016's La La Land. The result is the biggest per-screen average ever for a foreign-language film and among the top 20 specialty openings since 1982, according to Box Office Mojo. The film earned a rare 99% fresh rating on Rotten Tomatoes.

"It's amazing how well [Parasite] did. It's one of the biggest stories of the weekend," Dergarabedian said. "That per theater average means that those movie theaters were full. The demand far outweighed the supply."