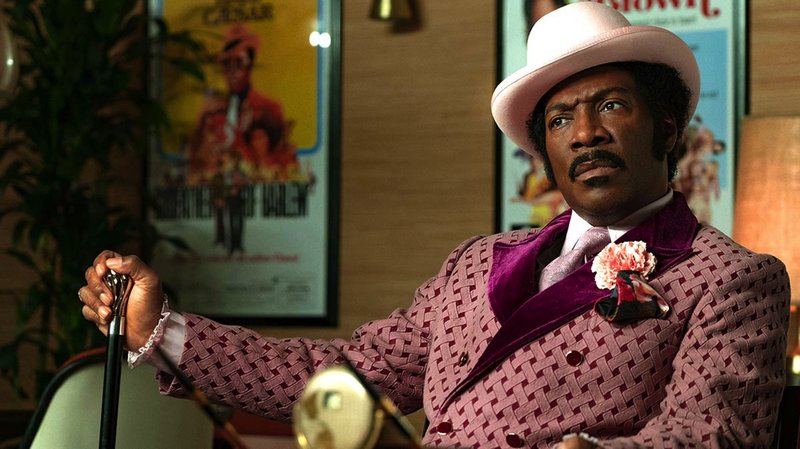 Eddie Murphy plays Fort Smith native Rudy Ray Moore in Craig Brewer’s Dolemite Is My Name, a Netflix film that’s being hailed as a comeback for the actor-comedian and the Memphis-based director.

Memphis-based filmmaker Craig Brewer's new Netflix film Dolemite Is My Name may be a bio-pic about Fort Smith-born comedian Rudy Ray Moore, but, in many ways, the director is making a movie about himself.

Moore, played in Brewer's film by Eddie Murphy, gained a small but devoted following for his raunchy comedy albums like Eat Out More Often and for his self-produced 1975 blaxploitation comedy-action-adventure-musical Dolemite.

Murphy plays the title character, a pimp who fights gangsters and crooked cops with his fists. His punches are so powerful that bad guys fall even when he misses them as if the force of wind were that powerful.

Oh, and Dolemite also has an army of kung fu fighting hookers.

Moore was a master of vulgar rhymes, so many of the laughs in Dolemite are intentional. But Moore and his largely novice crew had to figure out filmmaking as they went along. Still, despite a plot that makes no sense, an action star whose soft midsection can be politely described as "body positive" and technical ineptitude, Dolemite was a commercial hit in the mid-'70s and remains a cult favorite today.

Brewer took home an Audience Award from the Sundance Film Festival for his 2005 movie Hustle & Flow, but, like Moore, he struggled to get his 2000 movie The Poor & Hungry made using DIY techniques similar to the ones that Moore and his director D'Urville Martin used.

"When the project came to me of the story of Rudy making Dolemite, I felt like it was mine to tell," Brewer says. "I knew what he went through. I made a movie by hook or crook on the streets of Memphis with a bunch of people that didn't completely know what we were doing, but we had a lot of passion in it."

Because the director has had to struggle to get his own films made, Brewer says he can understand why Moore's own movie isn't polished. As Dolemite Is My Name illustrates, Moore's cinematographer Nicholas Josef von Sternberg (Kodi Smit-McPhee) shot most of the 1975 movie using "short ends," or unexposed strips of film left over from more generously budgeted shoots. Camera operators had to precisely time their footage because they couldn't work with full magazines.

"I love those moments in the [original] movie," he says. "To know that there might be parts of Jaws in Dolemite. It reminded me of when I made my first movie. I could either have a window [air conditioning] unit working, or I could edit. I couldn't do both because it would blow out the circuit breaker of my house in Memphis. I would edit for 10 minutes at a time because the drive that I had could only hold two hours' worth of footage."

Brewer also says that Moore has inspired rappers, like Snoop Dogg, who appears in the new film as a DJ, and comics like Chris Rock, who plays another DJ, and the Oscar-nominated Murphy. He says that if you look past the boom mics, there is worthwhile content.

"Not just for rappers but for me making independent cinema, he was that guy we would quote movie lines from," Brewer says. "I look at whole parts of (Moore's) Human Tornado, and I look at that whole sex scene, the one with the guys going down a slide and the child-like blocks. I look at those moments in movies like that [like] 'God bless this movie.' This imagery was not out here in the world. And now, here it is. I just saw that lost Orson Welles movie (The Other Side of the Wind), and I think this scene with the guys on the slide is just as interesting as what Orson Welles did."

Moore and Dolemite screenwriter and co-star Jerry Jones (Keegan-Michael Key) both hailed from the Natural State, and Brewer says that influenced both their lives and the movies they made. In the new bio-pic, both say they're glad they've relocated to Los Angeles.

"It may have had little to do with Arkansas and everything to do with the situation he was in in Arkansas," Brewer says. Moore was born in 1927 and left for Ohio when he was 15. In the bio-pic, he continually rages against the man who raised him who may or may not have been his father.

"I put a line in Hustle and Flow that my Dad once said," Brewer says. "I had Lucacris say, 'Memphis looks best in my rearview mirror. Later in his life, my Dad wanted to go back to Memphis, but he was trying to leave some troubles behind. I think that when Eddie [Murphy] and I first came together on the project. Those were some of the first conversations we were having. I knew that Dolemite was going to be electrifying, but let's talk about Rudy. How are we going to play Rudy? We're going to need to show optimism, but we've also got to show insecurity. We have to believe it. It has to be truly human."

This vulnerability may explain why Brewer and Murphy are getting the best reviews of their careers for Dolemite Is My Name.

Murphy, a producer on the film, befriended Moore, who died in 2008. He tried to make a movie on Moore for nearly 15 years. While Murphy has managed to impersonate everyone from Stevie Wonder and Richard Simmons to Jackie Gleason, Dolemite Is My Name shows him doing things he never did as Beverly Hills Cop's Axel Foley or his other fearless screen characters.

"Usually when Eddie Murphy is in a movie, he's there to entertain you. It's not that he's not electrifyingly entertaining in Dolemite Is My Name, but I think that you're much more emotionally involved because you saw him have moments of quiet and doubt," Brewer says.

If Brewer forced Murphy into new territory, he says that his own pivot to comedy hasn't been that radical.

"If you look at Hustle and Flow and Black Snake Moan, I always thought there were human comedy moments," he says. "There would be so many times in my career where there would be a television pilot would come up that was comedic that I really felt I was right for. But they'd say, 'but he's never done comedy.' I decided I'm making a bio-pic about somebody who's funny. What happened in the process of it is that I really felt at home with comedy. There's a particular tonal line that I enjoyed playing. You were not coming in where you could suspend disbelief or that you weren't living in a grounded world. There was still humor."

Working on Dolemite Is My Name did bring up some sadness for Brewer because John Singleton, who produced Hustle & Flow, had recently died from a stroke. Singleton, who's best known for helming Boyz n the Hood, was taken with The Poor & Hungry despite the fact that he was a black man from Los Angeles and Brewer was a white man from Memphis.

"There's something I've tried to explain to people who aren't from the South," Brewer says. "I think that white, black or brown, anybody who lives in the South is close to a life where maybe they don't have much, but they have a lot of soul and a lot of passion and a lot of love. I look at a scene in Boyz n the Hood where you see a couch that's covered in plastic. The mom doesn't want anybody sitting on the couch because she wants to keep it nice. That's relatable to me. That's relatable to a lot of people."