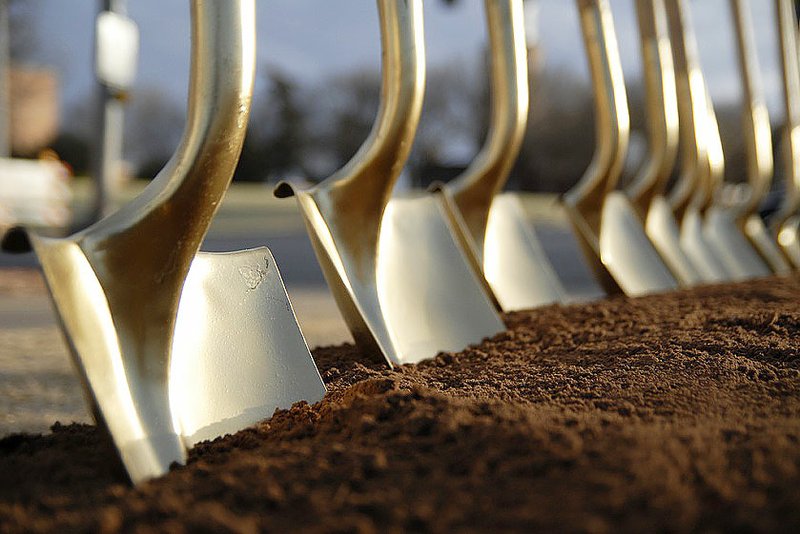 HIWASSE -- State and local officials broke ground on a misty Tuesday morning on two projects to fill missing links on the Arkansas side in the Bella Vista Bypass, also known as the Arkansas/Missouri Connector.

The estimated cost of the projects is just more than $100 million.

The two projects are the last 2.5 miles from Hiwasse to the state line and a single-point urban interchange, which will replace the roundabout at Interstate 49 and U.S. 71 in Bentonville where the highway heads west. Earth movers were already working Tuesday north of where the road now ends.

"After we've been talking about this for at least 25 years, a lot of planning and a lot of design, the Bella Vista Bypass, as far as I-49, will soon become a reality,"said Scott Bennett, director of the Arkansas Department of Transportation.

Bennett said the state's investment in the Bella Vista Bypass is going to be about $276 million.

Passing a half-cent sales tax for roads in 2012 made the bypass possible, Bennett said.

Highway Commissioner Phillip Taldo said the bigger picture is, when completed, I-49 will run from the Gulf Coast near New Orleans to Canada and will be an economic benefit to Northwest Arkansas.

"I might add that if the voters of Arkansas see the way to allow us to extend the half-cent sales tax we've been doing a lot of this work with, that we'll be working on the rest of I-49 from Alma to Texarkana, which happens to be the only significant part of the I-49 corridor that's not complete," Taldo said.

"So, the rest of the country is looking at Arkansas."

State Rep. Dan Douglas, R-Bentonville, said 25 years ago the project was about safety and getting cars off of U.S. 71 through Bella Vista. Now it's largely about relieving congestion as the region grows.

"If you ever tried to go through Bella Vista down 71 at five o'clock on an afternoon, bless your heart," Douglas said. "You can't get there from here, OK?"

The new road will open up northwest Benton County to explosive growth in the coming years, Douglas predicted.

"Just the two-lane section that is already open reduced commute times from Gravette to Bentonville from 45 minutes on curvy, dangerous roads to 20 minutes, it's just amazing. And, it's unbelievable what it's done to property values in the Hiwasse and Gravette area."

"They're just as frustrated as the rest of us, having to go through Bella Vista with all the traffic lights," Christie said. "This is a big, big deal and very, very important for this area."

Missouri highway officials want to have their portion of the bypass finished in 2022, about the same time as the interchange project in Arkansas is expected to be complete, according to Andrew Mueller, a district engineer. The idea is to get the projects coordinated on both sides of the state line.

The Missouri Highway and Transportation Commission approved in March the finances and timeline for completion of 4.8 miles of I-49 from Pineville, Mo., to the state line. The estimated cost is $47.9 million.

Mueller said Missouri was thrilled to receive a $25 million federal grant to make completing its side of the project possible.

"That is going to finish the last remaining section of a 278-mile corridor between Fort Smith and Kansas City," Bennett noted.