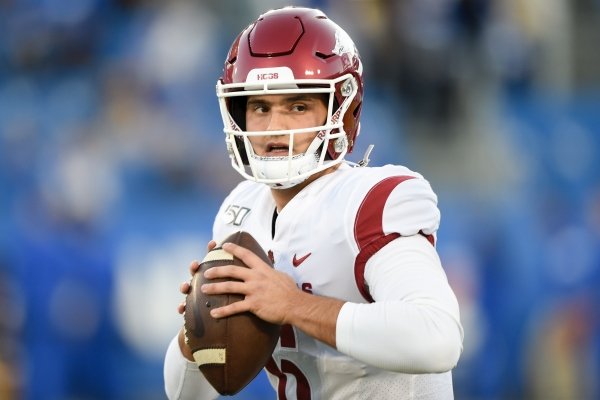 FAYETTEVILLE -- Senior Ben Hicks and junior Nick Starkel will split first-team snaps at quarterback this week for the University of Arkansas in preparation for Saturday's 11 a.m. game against Auburn.

The Razorbacks (2-4, 0-3 SEC) have gotten better play from their backup quarterback all three games in which the backup got substantial playing time: Starkel at Ole Miss, and Hicks vs. Texas A&M and at Kentucky.

"Nick and Ben will get the one reps," Coach Chad Morris said at his Monday news conference. "They were in here last night and everybody was ready to get back to work last night, which was very encouraging. So, with those guys getting a share of the one reps this week, I think the whole thing is consistency as a team, consistency as an offense. That's really kind of what we're looking for in this.

"We were trying to stay out of this, but this is just kind of where we're at right now with it."

[Video not showing up above? Click here to watch » https://www.youtube.com/watch?v=wkN1cVIkhm4]

Arkansas junior Rakeem Boyd grabbed the SEC rushing lead over the weekend with his career-best 134-yard performance at Kentucky.

Ole Miss freshman quarterback John Rhys Plumlee does not qualify among rushing leaders from an NCAA perspective based on number of games played, but he has an SEC-best 117.5 rushing ypg in four games.

"Rakeem, I think he's playing as well as anybody," Coach Chad Morris said. "He's running the ball as effective as anybody in the conference."

Linebacker D'Vone McClure, a junior from Jacksonville, has left the team after playing off the bench in the first six games.

Coach Chad Morris said he talked with McClure more than once Sunday about his decision.

"He shared with me, 'Coach, I want to step away from football and I want to focus on my academics and focus on getting a job to help support my family,' " Morris said. "That was the way we left it at that time."

McClure, 25, played professional baseball in the Cleveland Indians' organization as an outfielder after being a fourth-round draft pick in 2012, then joined the Arkansas football team in 2016.

After deciding to give up football in 2017, McClure rejoined the team last season when he was awarded a scholarship and played in 12 games, including 12 starts at nickel back.

McClure moved to outside linebacker this season and had 11 tackles, 1 pass breakup and 1 quarterback hurry. Last season he had 26 tackles, 1 sack, 3 pass breakups and 1 forced fumble. As a freshman in 2016, he played on special teams.

Morris said that as far as he knows, McClure hadn't entered the transfer portal and doesn't plan to play at another school.

"From my communication with him, it was from stepping away for family purposes," Morris said. "Obviously, if he wants to transfer, then we'll help him out in every regard that we can."

True freshman cornerback Devin Bush, one of the top defensive signees in the Hogs' 2019 class, announced on his Twitter account Monday he has entered the transfer portal.

"After speaking with my parents and coaches, I've made the decision to officially enter the transfer portal," Bush wrote. "Thank you Coach Morris and the staff for all you have done."

Bush, a four-star recruit from New Orleans who was ranked the No. 16 high school cornerback in the country by ESPN last year, played in two games with a handful of snaps against Ole Miss and San Jose State.

Senior offensive tackle Colton Jackson, who missed the Kentucky game while in concussion protocol, is listed on the depth chart this week.

Considering Jackson has been out with two concussions, Morris was asked whether there is a higher level of concern as opposed to an issue such as an ankle or arm injury.

"The health and well-being of all our players is extremely important," Morris said. "I anticipate him playing this week and being back into that starting rotation. But it was something that's been carrying on for a few weeks with him, and we wanted to make sure he's back fully healthy before he's ready to go."

Junior receiver Jordan Jones, who hasn't played this season due to a high ankle sprain, likely won't be back for the Auburn game, Morris said.

"We're still kind of seeing where he is as far as his health standpoint," Morris said. "He's struggling running without pain, so I don't anticipate him being back."

Junior running back Chase Hayden missed the Kentucky game while in concussion protocol, but he practiced Sunday night.

"We'll continue to monitor him and evaluate him and see where he is," Morris said.

The Razorbacks' road game at No. 1 Alabama on Oct. 26 will kick off at 6 p.m., the SEC announced Monday.

ESPN will broadcast the 30th meeting between the Razorbacks and the Crimson Tide at Bryant-Denny Stadium in Tuscaloosa, Ala.

Kentucky's Lynn Bowden was one of four players named to the Paul Hornung Award weekly honor roll Monday. The award is given each year to the most versatile player in the nation, and it names an honor roll each week.

Bowden, a junior wide receiver who moved to quarterback due to injuries, accounted for 274 yards and 3 touchdowns in the Wildcats' 24-20 victory over Arkansas.