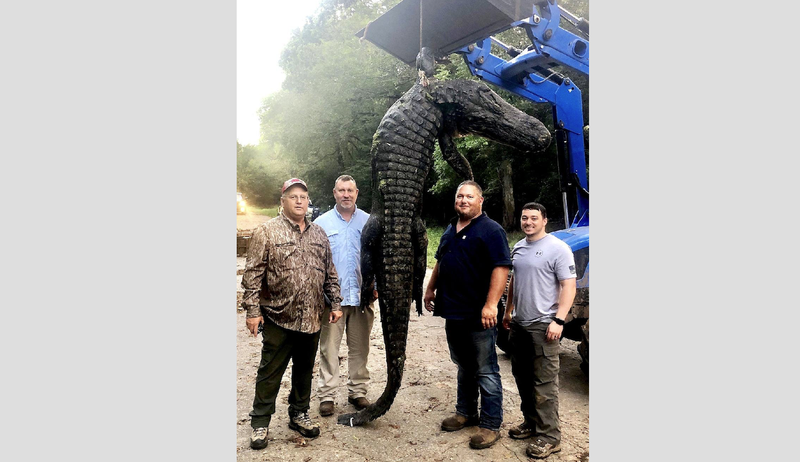 The pre-dawn hours of Sept. 21 produced this giant alligator in Arkansas County for James McGriff (from left), Bryan Smallwood, Jamie Donaldson and Dale Armstrong during the state’s controlled alligator season. Donaldson had the permit and delivered the final shots on it.

The alligator he killed on Sept. 21 might have set the state record if it weren't missing part of its tail. Instead, it measured 12 feet, 1 inch long.

"It weighed more than 700 pounds, and his head measured 31 inches," Donaldson said. "With the part of his tail that was missing, he should have been over 13 feet long."

Donaldson wasn't overly offended because he initially believed the gator to be 10-11 feet long.

"When we finally got him to the top, I realized he was a lot bigger gator than I thought," Donaldson said. "When I first harpooned him, all could see was his eyes. When he came up, I could see that he was just a monster gator."

Donaldson had some experience by which to gauge the gator. He killed one four years ago that measured 10-2. That was a far different experience, he said, because that hunt occurred on public water where many other hunters were trying their luck.

This year's hunt was on private water in Arkansas County. Donaldson and his three helpers were the only other hunters present. The lack of traffic made the gators less skittish and allowed the group to be selective about their quarry.

Assisting Donaldson were Bryan Smallwood, Dale Armstrong and James McGriff. They hunted in an Arkansas River slough that Donaldson said was practically alive with alligators.

The group snuck upon the alligator in a boat propelled by a stern-mounted trolling motor. This is an advantage, Donaldson said, because a gator feels turbulence and vibration from a bow mounted trolling motor sooner than from a stern-mounted motor. He said it also pays to use the dimmest light possible to illuminate a gator's red eyes because a bright light is more likely to spook a gator.

"I noticed a few times before that gators will sink on you right before get to them," Donaldson said. "You can get right on top of these gators with dim light."

At 3:30 a.m., the crew was practically on top of this alligator when it began to submerge, so Donaldson harpooned the leviathan in its side.

Attached to the dart is a 20-foot rope and big buoy. Smallwood grabbed the buoy and then assisted McGriff and Armstrong in trying to pull the gator to the surface. That's exhausting work because a gator anchors to the bottom by digging its webbed feet into the mud.

"They can hold their breath for 45 minutes to an hour," Donaldson said. "It took 45 minutes to get him off the bottom. He drug that 16-foot boat around in circles for that long."

Once on the surface, Donaldson harpooned the gator a second time for assurance in case the first dart pulled free.

"He went down for another 10 minutes before we could get him up to where I could shoot him," Donaldson said.

On the second ascent, Donaldson shot the gator twice with a load of No. 4 lead from a 12-gauge shotgun. Then they dragged the beast to the shore and dragged it onto the shore with a truck and tow straps.

At 5 a.m., a tractor with a front-end loader deposited the gator onto an 18-foot long trailer. The crew drove it to Half Moon Processing in DeWitt and enjoyed the startled reactions from fellow motorists.

"We got a lot of honks and a lot of looks, especially when we got to town," Donaldson said.

He took the skin to Nature's Gallery Taxidermy in Star City for mounting.

"I'm having head mounted," Donaldson said. "The skin will be tanned. You can lay it out on floor or put it on the wall. The head will definitely be on a pedestal."

The processor vacuum packs the meat, which Donaldson said is delicious. He said the flavor and texture are similar to those of chicken.

"I soak mine for a couple of days and deep fry it," Donaldson said.

The group's work was only half done at that point. McGriff also had an alligator tag, so without any sleep for 24 hours, they were back on the water the following night. McGriff bagged an 8-foot gator.

It was the first gator hunt for Armstrong and Smallwood. Donaldson said no matter how many gators you fight, you never get tired of the thrill that comes from an animal that can and will kill a tormentor.

"There's no other feeling like it," Donaldson said. "It gives you a big rush. When that big of a gator is that close, your adrenaline gets up pretty quick, especially for people that haven't done it before." 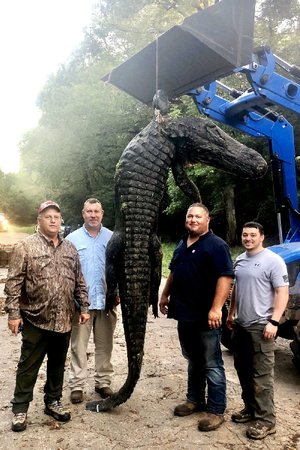 Photo by Jamie Donaldson
The pre-dawn hours of Sept. 21 produced this giant alligator in Arkansas County for James McGriff (from left), Bryan Smallwood, Jamie Donaldson and Dale Armstrong during the state’s controlled alligator season. Donaldson had the permit and delivered the final shots on it. 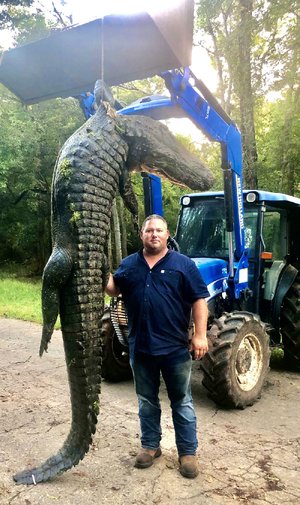