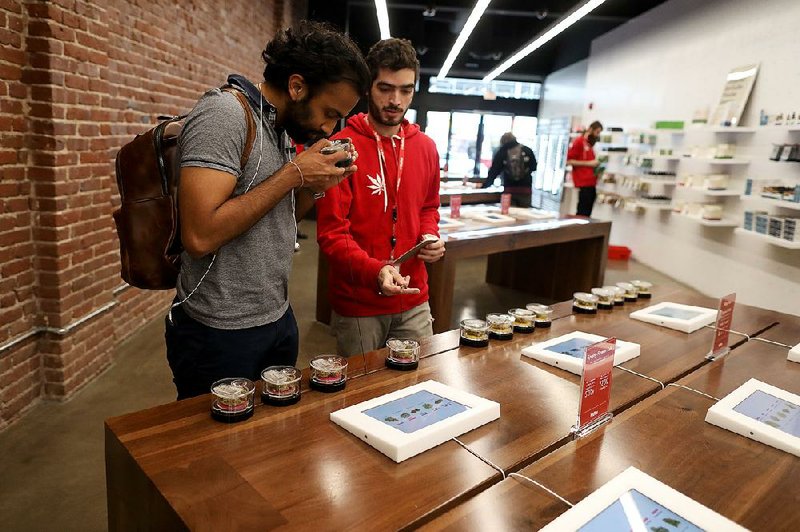 A sales assistant shows a customer flower strains of marijuana at MedMen, a marijuana and marijuana products retail store, in Los Angeles in 2018.

Last week, the companies announced they were abandoning a transaction that already had been delayed by regulatory hurdles, but MedMen is not walking away empty-handed.

It's still getting a piece of PharmaCann's Illinois business -- just in time to prepare for the Jan. 1 start of recreational marijuana sales in the state. In exchange for forgiveness of certain debt, MedMen is getting one of PharmaCann's two growing facilities, a retail store, and a license to open another retail location.

That's a win for MedMen, whose only presence in Illinois is a retail location in Oak Park.

Earlier this month, PharmaCann's two growing facilities were among the first in Illinois to receive licenses to start growing marijuana for recreational sales.

"Illinois has emerged as the most attractive opportunity for our longer-term, strategic growth plan," MedMen co-founder and CEO Adam Bierman said in a new release. "The addition of those assets ... is a win for MedMen and our shareholders."

MedMen said the all-stock deal to buy PharmaCann no longer was in the best interest of shareholders. PharmaCann said it would continue to expand on its own in Illinois and other states.

"It makes our path clear," said Jeremy Unruh, PharmaCann's director of public and regulatory affairs. "We know the Illinois landscape and can't wait to play in our own backyard here."

As part of the agreement to terminate the deal, MedMen forgave a line of credit it had extended to PharmaCann totaling about $21 million, according to MedMen.

The line of credit was used for expansion of PharmaCann's cultivation facilities and dispensaries around the country, according to regulatory documents. The cannabis industry still lacks widespread access to traditional bank loans due to its federal illegality, and companies must often find the capital to expand elsewhere.

Pharmacann is turning over a cultivation facility in Hillcrest, a dispensary in Evanston, a license to open another marijuana shop in the Greater Chicago area, and a license for a facility in Virginia.

PharmaCann, which was one of the largest operators in Illinois, will be left with one cultivation facility and four operational retail locations in the state, plus the option to open four more stores. It is expanding its operations in other states. Its cultivation facility in Dwight will more than double its production capacity by next year.

A representative from MedMen did not respond to requests for comment.

MedMen's agreement to buy PharmaCann about a year ago led a flurry of big-dollar acquisitions in Illinois and around the country. It also came in the midst of an outpouring of investment into rapidly expanding marijuana companies.

But the atmosphere surrounding cannabis investments has shifted. Investors are more sheepish, and the big-dollar deals that dominated the end of 2018 and the beginning of this year have slowed down.

Share prices of publicly traded marijuana companies in the U.S. and Canada have seen steady declines in the past six months. MedMen's share price dropped 61% from when the deal was first announced last October to $1.72 a share when the deal was scrubbed and traded in the $1.30 range later in the week

In that time period, the company has faced scrutiny for its spending levels, cut executive salaries, faced lawsuits and lost top executives. The Tuesday announcement also included the termination of its CFO and the appointment of his successor.

MedMen said it will increase its focus on its home state of California, where it has licenses for 17 stores.

"These companies were coming out of a federal review process into a market that looked very, very different than when they first made the decision to merge," said John Kagia, chief knowledge officer at cannabis research firm New Frontier Data.

Bethany Gomez, managing director of Chicago-based marijuana research firm Brightfield Group, said some of the deals getting announced are overvalued.

"They have to kind of come down to reality a little bit," Gomez said. "We may see more of them fall apart. It is absolutely a turbulent industry."