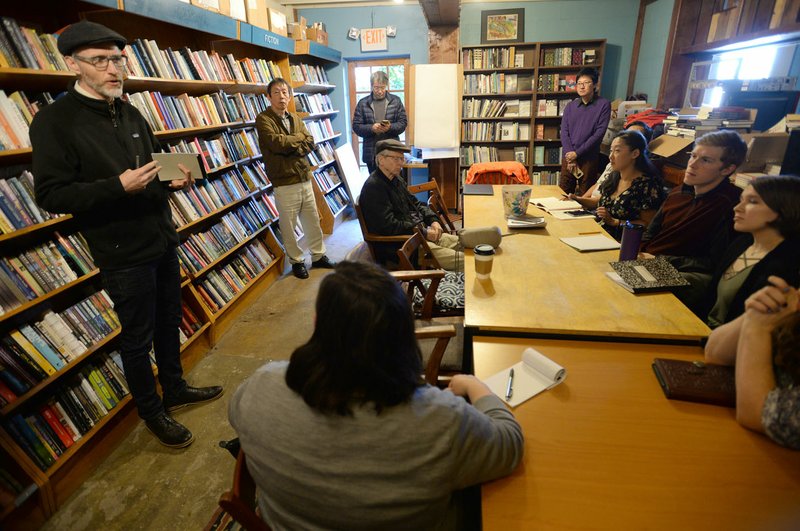 NWA Democrat-Gazette/ANDY SHUPE Jonathan Stalling (left), a poet and professor of English at the University of Oklahoma, speaks Saturday during a poetry workshop at Nightbird Books in Fayetteville that's part of a tour meant to unite U.S. and Chinese poets.

FAYETTEVILLE -- The fourth Open Mouth Poetry Festival served as a bridge Saturday for creative and cultural relations between the United States and China.

The one-day festival offered several poetry readings and workshops throughout Fayetteville, to include an opportunity for participants to learn more about writing Chinese poetry from members of the U.S.-China Poetry Dialogue at a workshop at Nightbird Books.

Gateway to a Black Cat by the River

On it, there’s a pitch-black hue second only to

Christmas night of 1962 which Marilyn Monroe

didn’t live to see. On it, an array of alabaster,

though much smaller in size, second only to how

you’ve felt the snow on the peak of Muztagh Ata

make the sunlight start to prickle. It’s not just some

mere embellishment that can easily be dismissed.

The cat is real but finds it difficult to return to reality.

Like us, it resides in the outskirts of the capital

but has never been to Fragrant Hills; it has

a pungent odor which you’ll never have a chance to smell.

Between yesterday and today, the only difference is

the cat is still crouching in the dry, flaxen grass,

leaving itself exposed to an evil plan.

It experiences the passage of time as

a homing-in-on its soon-to-be prey again and again,

its patience reduced to part of winter’s game.

When the cat looks back to judge your motives,

it has the eyes of a wizard wearing a black mask.

It only appears nervous

so as not to embarrass you.

It knows you’ve seen its secret:

in its stomach lies

a magpie with undigested wings.

It knows you haven’t told anybody else yet, as though

this sort of thing can only be hinted at in poetry.

The weeklong dialogue began Oct. 6 and brought six Chinese poets to locations throughout Missouri, Oklahoma and Northwest Arkansas to engage with American poets, said Jonathan Stalling, dialogue director and English professor at the University of Oklahoma.

The annual dialogue is sponsored by the Institute for U.S.-China Issues at the University of Oklahoma in Norman and the Poetry Institute of China, he said. The event brings Chinese poets to America in odd years and American poets to China in even years.

"We have in this moment an opportunity to really forge and deepen and strengthen the resiliency of our cultural bridge," Stalling said of the dialogue.

"What Jon is doing internationally, we're trying to do in Northwest Arkansas," Rector said of trying to create cultural bridges through literature. "We're interested in building community."

Stalling said Northwest Arkansas was a good location for the Chinese poets to visit due to the region's deep economic ties to China.

He attributed Bentonville-based Walmart as a significant contributor toward recreating America's commercial foundation by lowering prices and shifting the industrial base from America to China. The change deepened the industrial foundation of China and helped lift hundreds of millions of Chinese people out of poverty, he said.

"That was the foundation of U.S. and China economic relations for the last 40 years, and that has led to 40 years of peace with our two countries because of this transactional agreement that was a win-win scenario," Stalling said. "We got lower prices, they were able to raise their quality of life."

He said he's enjoyed his time in Northwest Arkansas.

"It's beautiful. Just like a paradise," Di said with the assistance of American translator Thomas Zhang.

The poet said he participated in the dialogue because of his familiarity with American poetry.

"When I began to write, I had already read a lot of the poems from American writers like Robert Frost," Di said. "In China, the terminology 'new poem' also came from the United States."

He said American poetry has also gained much from Eastern culture.

"The modernism of American poems learned a lot from Chinese classical writing. So, I decided to come here to see the society," Di said. "I really appreciate the openness and the innovation of the American poem society."

Keli Wright of Rogers writes in her spare time and attended Saturday's workshop.

Participants learned about Chinese creative concepts and perspectives, as well as the use of grammatical tools such as metaphors.

Wright said she found the manner in which the Chinese poets shared how they use metaphors when writing to be the most revealing aspect of the workshop.

"It's more than just writing down a few words that kind of link together and create a picture in your mind that connects you to something else," Wright said. "It's intentionally doing that in a deeper kind of multilayered way."

She said her time with the Chinese poets has grown her interest in poetry even more.

"I like Eastern poetry," Wright said. "I think I'm going to go read some more of it." 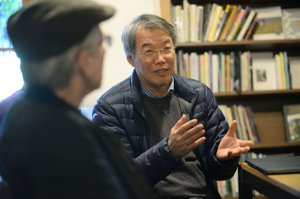 NWA Democrat-Gazette/ANDY SHUPE Zang Di, a poet from China, speaks Saturday during a poetry workshop at Nightbird Books in Fayetteville that's part of a tour meant to unite U.S. and Chinese poets.