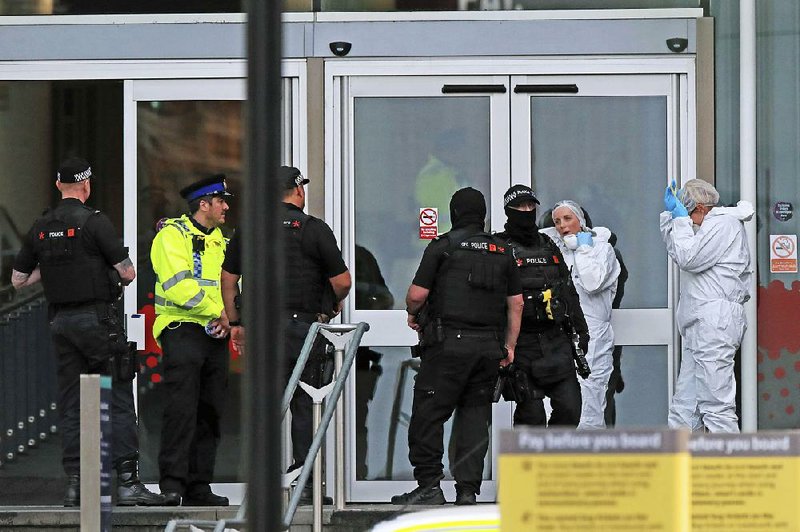 Investigators work outside a shopping center Friday in Manchester, England, where a knife-wielding attacker chased shoppers and police.

LONDON -- A man wielding a large knife who was accused of lunging at shoppers and chasing unarmed police in a northwestern England mall was arrested Friday and faces a terrorism investigation.

Five people were hurt, three of whom needed hospital treatment for stab wounds, and the 41-year-old suspect was detained. Police do not believe anyone else was involved in the attack at the Arndale Center in Manchester.

"We do not know the motivation for this terrible attack," said Russ Jackson, a Manchester assistant chief constable. "It appears random, is certainly brutal and of course extremely frightening for anyone who witnessed it."

Witnesses to Friday's attack described the distress of terrified shoppers sheltering in stores. Unarmed community support officers challenged the attacker, but were chased as they called for backup. Armed and unarmed officers responded within five minutes.

Prime Minister Boris Johnson said he was "shocked by the incident," adding: "My thoughts are with the injured and all those affected."

KAMPALA, Uganda -- A bill proposing harsh penalties against gay sex is set to be introduced in Uganda's national assembly, according to a senior official who has expressed regret over the failure of an attempt years ago to punish gay people.

Lawmakers supporting anti-gay legislation have "remobilized" so that a draft new bill gets strong support when it is put to a vote, the state minister for ethics, Simon Lokodo, told broadcaster NTV on Thursday.

"With the standard of proof, when do you get people doing it in their houses? You only have to imagine," Lokodo said.

Gay-rights leader Frank Mugisha said activists will fight any effort to introduce legislation that violates the rights of gay and transgender people.

Lokodo, who has been accused of breaking up gay-rights events, has long called for the introduction of tough new legislation after a panel of judges nullified an anti-gay law enacted by President Yoweri Museveni in 2014 after international condemnation.

Former South African President Jacob Zuma lost a court bid to stop a graft case against him that dates to the 1990s.

The ruling Friday by the High Court in the eastern town of Pietermaritzburg clears the way for Zuma's trial to begin Tuesday. He faces 16 charges, including money laundering and racketeering.

Prosecutors spent eight years investigating allegations that Zuma took $270,000 in bribes from arms dealers. They abandoned the case months before he became president in 2009, saying taped phone calls indicated that the chief investigator may have used the case to frustrate Zuma's efforts to win control of the ruling African National Congress party.

In October last year, the Supreme Court of Appeal upheld a lower court ruling that the decision not to pursue the case was "irrational." While that judgment paved the way for the trial to proceed, prosecutors allowed Zuma to make representations why it should be abandoned.

President Cyril Ramaphosa made the fight against crime and corruption a top priority when he replaced Zuma in February last year. He's set about restoring credibility to law enforcement agencies like the National Prosecuting Authority, which was dogged by allegations it allowed political considerations to influence its decisions to prosecute during Zuma's rule.

PORT-AU-PRINCE, Haiti -- Protesters burned tires and spilled oil Friday on streets in parts of Haiti's capital as they renewed their call for the resignation of President Jovenel Moise just hours after a journalist was shot to death.

No one has been arrested in the death of reporter Nehemie Joseph of Radio Mega, who had been covering the protests and was found dead in his car late Thursday in the town of Mirebalais, northeast of Port-au-Prince, according to Radio Vision 2000.

In a Facebook post in late September, Joseph said that a couple of politicians had threatened him after one of his shows and accused him of inciting protests. It was unclear, however, if this was the motive for his killing.

Joseph is the third Haitian journalist killed in less than two years.

The most recent killing comes during a spike in violence in Haiti's capital and surrounding communities as protests that have caused nearly 20 deaths and almost 200 injuries have paralyzed the country for nearly a month.

Earlier this week, Moise announced that a commission was set up to find a way to end the worsening crisis, but opposition leaders have rejected his call for dialogue and unity. The opposition says it wants Moise to step down as anger over corruption, rising inflation and lack of basic goods including fuel continue to roil Haiti. 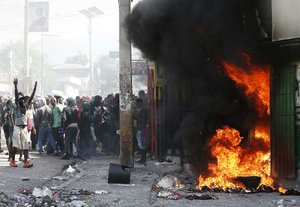 Photo by AP/REBECCA BLACKWELL
A crowd gathers as a building burns during violent protests Friday in Port-au-Prince, Haiti.