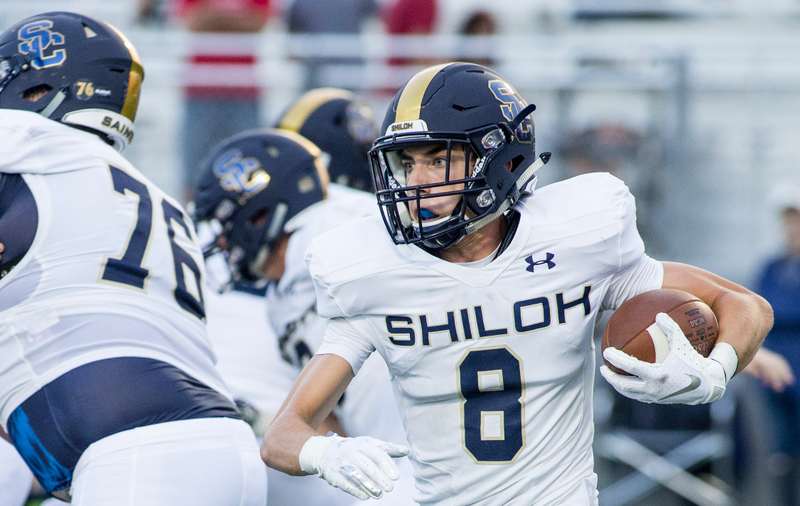 PRAIRIE GROVE--Shiloh Christian continued its quest for an unbeaten 4A-1 conference crown in dispatching Prairie Grove on Friday at Tiger Stadium, 56-7.

The Saints (6-0, 3-0) used a barrage of big plays from Truitt Tollett and from their defense to claim the victory.

"Our attitude, effort and focus this week was exactly where it should have been," Shiloh coach Jeff Conaway said. "I was very proud of the way our coaches and players played and that's a good football team we beat. I felt like we were the most physical team on the field."

Tollett finished his night with 232 all-purpose yards and three touchdowns--one rushing, one receiving and one by way of a punt return when the game was firmly out of reach.

Logan Raben opened the scoring late in the first quarter with a 13-yard touchdown run. After forcing a three-and-out, the Saints would score on a 34-yard pass from Eli Reece to Tollett to make it 14-0 early in the second quarter.

It was eventually 28-0 at halftime after Tollett's 53-yard touchdown run with 6 minutes, 15 seconds remaining in the second quarter.

The Tigers (2-4, 2-1) would score their only points of the evening midway through the third quarter when Jared Harger plowed in from 2 yards out.

Shiloh invoked the sportsmanship rule with multiple touchdowns sandwiched in between the third and fourth quarters, then Tollett put the finishing touches on his night by fielding a punt and taking it 45 yards for a touchdown to make it 49-7.

"I think we gave him 10 touches in the first half and he made all 10 worthwhile," Conaway said. "He's an electric playmaker for us and it's fun to give him the ball and watch him work."

Prairie Grove suffered its first league loss and is just hoping to get healthy in time for the stretch run, as multiple players were injured during the contest and the team was already down a number of starters.

Reece finished 10 of 16 passing for 152 yards and the touchdown, but threw an interception on the first play from scrimmage after halftime.

The Tigers did manage to churn out 152 yards rushing, with Cade Grant leading the way with 52 yards on 7 carries.

• The stadium's scoreboard was hit by lightning earlier in the week, so time was kept on the field.

• The Tiger student section had a sports jersey theme night.

• Next week Shiloh Christian continues 4A-1 play at Gentry, while Prairie Grove travels to Pea Ridge.

Print Headline: Tollett, Saints too much for Tigers