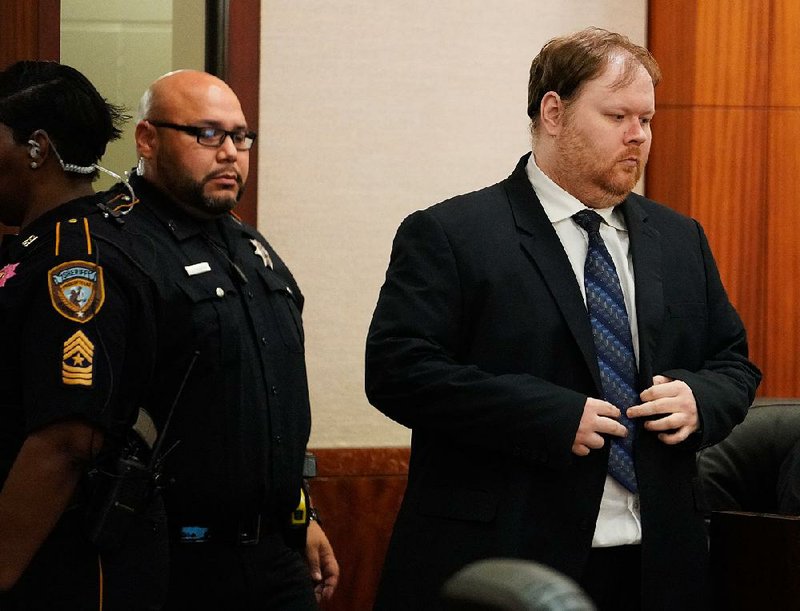 Ronald Lee Haskell is escorted into court Thursday in Houston. A jury on Friday rejected his insanity claim and sentenced him to death in six slayings, including four children.

HOUSTON — A man who prosecutors say was driven by vengeance when he fatally shot six members of his ex-wife’s family in Texas, including four children, has been sentenced to death.

Jurors sentenced Ronald Lee Haskell after deliberating for little more than four hours Friday. The jury had to choose between life in prison without parole or a death sentence.

The same jury last month convicted Haskell, 39, of capital murder in the 2014 killings of Stephen and Katie Stay at their home in suburban Houston. The jury rejected his attorneys’ efforts to have him found not guilty by reason of insanity.

Haskell killed the couple and four of their children in the home’s living room in 2014. A fifth child, 15-year-old Cassidy Stay, was shot in the head but she survived by playing dead.

Defense attorneys argued for a life sentence, with Neal Davis III saying Haskell should spend the rest of his life thinking about what he has done and “die in prison.”

But prosecutors said Haskell had faked a mental illness and meticulously crafted a plan to hurt anybody who helped his ex-wife, Melannie Lyon, after the couple divorced, traveling from California to Texas to carry out the killings.

OKLAHOMA CITY — Supporters of a proposal to expand Medicaid in Oklahoma said they have enough signatures to put a state question on the ballot next year.

Yes on 802’s campaign manager Amber England said the community organization collected the state requirement of 178,000 signatures, which must be verified, The Oklahoman reported.

The proposed question would amend the state’s constitution and expand Medicaid coverage to adults between ages 18 and 65 whose incomes do not exceed 133% of the federal poverty level.

England said Thursday during a conference call for the campaign’s volunteers that more signatures will be gathered until the Oct. 28 deadline to serve as a cushion in case someone should challenge the petition.

“We need to deliver a message that will resonate across the state later this month when we turn in these signatures,” England said.

“Our goal has never been to turn in the bare number of signatures needed to make the ballot,” she told supporters. “We know that opponents are going to do everything in their power to prevent Oklahomans from getting the chance to vote on this. We’re just not going to let that happen.”

NASHVILLE, Tenn. — Officials at a public school district in Tennessee said that U.S. Immigration and Customs Enforcement agents tried getting student records from one of its elementary schools, but the agency responded that such a request would be unlikely.

“We don’t do any immigration enforcement at schools,” said Cox, who added that he can’t imagine what records would be needed from a school.

SACRAMENTO, Calif. — California will become the first state in the nation to require public universities to offer abortion medication at campus health centers starting in 2023 under legislation signed Friday by Gov. Gavin Newsom.

Democratic lawmakers described the law as California’s latest step to defend abortion access as Republican-led states roll back access to the services.

“I am thrilled that Governor Newsom rejected the misguided paths that other states have taken in limiting access to abortion care,” Democratic Sen. Connie Leyva said in a statement. “Abortion is a protected right, and it is important that everyone — including college students — have access to that right, if they so choose.”

The law relies on private donations, not state dollars, to pay for the setup and services. The state hopes to raise more than $10 million.

All 34 University of California and California State University campuses would be required to provide the services. The process requires taking two pills and is an option for women who are less than 10 weeks pregnant.

Religious and anti-abortion groups opposed the bill. The University of California system has not taken a position.

Print Headline: The nation in brief