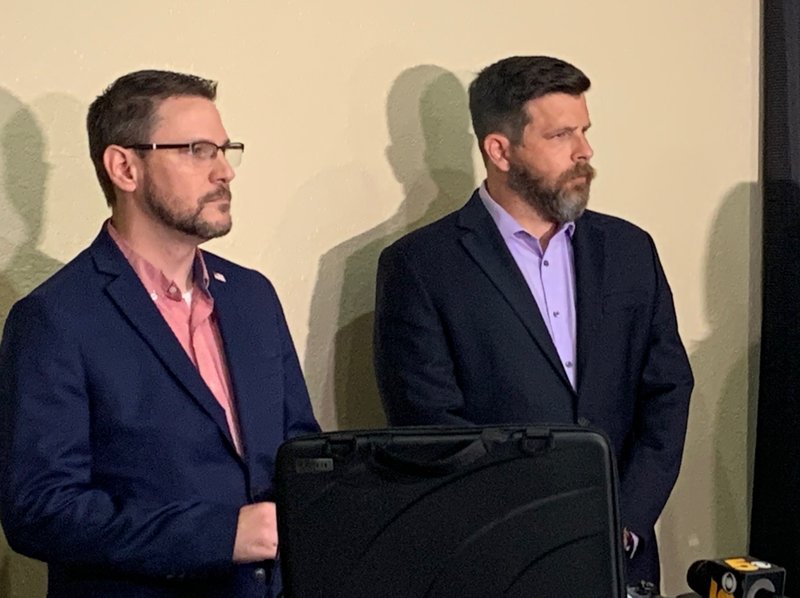 FAYETTEVILLE -- At least 19 women who agreed to give up their soon-to-be-born babies may have done so under false or illegal pretenses, a Washington County Circuit judge was told Friday.

How those adoptions can legally proceed even if the birth mothers are willing to continue is unknown, according to testimony in an emergency hearing Friday morning before Judge Doug Martin.

A dedicated email address has been created to allow anyone affected by Paul Petersen’s arrest to contact the U.S. attorney’s office with questions or concerns. The identity of people contacting the office and information received will be strictly confidential. The office may be reached by emailing to [email protected] or through a direct link at www.justice.gov/wdar.

"It's absolute chaos," said Joshua Bryant of Rogers, attorney for 13 couples who have signed contracts to adopt.

Martin agreed and ordered his court to oversee all of the cases in Arkansas in which recently indicted adoption attorney Paul D. Petersen was involved. Martin's court will sort out the situation case by case.

"This is very much of an emergency moment," Martin said at the end of the two-hour hearing. "We're going to get creative," he added.

At least 19 pregnant women brought to Arkansas from the Marshall Islands by Petersen, 44, of Mesa, Ariz., are still here, witnesses told the court. One is in Oklahoma and two of the women gave birth Thursday, witnesses said. One in DeQueen appears to be receiving no prenatal care, according to testimony.

Petersen was arrested Tuesday on state charges in Arizona. He was also indicted Monday on 19 counts involving illegally bringing pregnant women to the United States for adoptions. He also faces 32 felony charges in Arizona for bringing women there and illegally enrolling them in Medicaid as Arizona residents. He faces another 11 illegal adoption counts in Utah filed this week.

The Marshall Islands are a former territory of the United States about 2,000 miles west of Hawaii. Marshallese are allowed to travel freely to the United States under a treaty between the two countries. There is a specific exclusion, however, if the sole purpose of the trip is to deliver a child for adoption. Adoption-only trips are specifically forbidden by a 2003 amendment to the treaty.

The mothers she has visited are terrified and, in at least one case, clearly in shock, social worker Felicia Ramos testified Friday. They don't know their legal status and fear deportation, arrest or other consequences, she said. The birth mothers depend on Petersen's law firm for financial support, paid for by the adoptive parents-to-be, attorneys at the hearing told Martin.

"They are homeless, penniless and have no representation," adoption attorney Andrea McCurdy of Fayetteville testified about the birth mothers.

Sara Goodrum is an adoption attorney in Fayetteville who represented some of the adoptive parents who dealt with Petersen in the past. She said Petersen's usual terms with adoptive parents required $25,000 up front with another $10,000 once the adoption was finalized.

Martin agreed to a motion by Bryant to put any remaining money from those cases and those cases' files in a trust, taking them from the Petersen firm. The Arkansas Office of Professional Conduct, which oversees such situations involving attorneys, will oversee the trust if the court asks, the office confirmed Friday. Martin indicated from the bench at the hearing he would do so.

Courts don't usually get involved in adoption cases until the adoption is ready to be made final. Martin's actions were in response to the requests of the would-be adoptive parents whom Bryant represents. Bryant, a long-time adoption reform advocate, told the court he is taking the case on a nonprofit basis.

"These were problems that were allowed to grow in the dark," Bryant told the judge. "They should be fixed in the light."

None of those plaintiffs want to go through with the adoption if the mothers are unwilling, Bryant said. They also want to make sure all the women and their children are cared for, he said.

U.S. Attorney Duane "Dak" Kees confirmed Wednesday none of the adoptive parents waiting for children or whose adoptions were completed in the past are under investigation. They weren't aware of the illegality of Petersen's methods, Kees said.

Petersen is licensed to practice law in all three of those states in which he's charged, at least for now. Stark Ligon of the Office of Professional Conduct in Arkansas said Friday he expects consideration to begin early next week on whether to suspend Petersen's law license here.

Martin granted every motion Bryant sought. No one opposed the motions. No attorney or other advocate for Petersen came to Friday's hearing.

Calls to Petersen's attorney, Matthew Long of Scottsdale, Ariz., and to the Petersen law firm's paralegal in Arkansas, Megan Wolfe of Fayetteville, weren't returned Friday. Petersen is the elected assessor of Maricopa County, Ariz. A spokeswoman for the assessor's office in Phoenix said they aren't in contact with either Petersen nor his attorney. As of Friday, Petersen remained in the Maricopa County Jail in lieu of a $500,000 cash bond.

"We have some mothers that if they give birth, we literally do not know what will happen to their child," McCurdy said during the hearing. The women were attracted to adoption in Arkansas by offers of money and other compensation, she said. For instance, one mother was promised her boyfriend would also have his transportation costs to the United States paid if she agreed, McCurdy said.

Petersen worked with Marshallese associates to recruit pregnant islanders to give their children up for adoption in return for money, the federal indictment alleges. He spent two years in Marshall Islands as a missionary and learned the language, court records show.

Justin Heimer, another Fayetteville adoption attorney, was recognized as an expert witness by Martin during the hearing.

"All these adoptions are in jeopardy," Heimer testified about the 19 birth mothers. "There is a real questions about jurisdiction. The mother is supposed to be a resident [of Arkansas] for four month for an adoption to be legal. Some have only been here for the last couple of weeks.

"Those of us who work closely with adoptions are not terribly surprised by this," Heimer said of Petersen's indictment.

The region's legal community and others had put the Marshallese adoption trend under increasing scrutiny over the years, Heimer said. He believes Petersen and others doing a high volume of such cases were taking steps to branch out to other jurisdictions, he said. That way they could get away from the increasing local scrutiny, he said.

Another eight pregnant women were found in a home Petersen owned in Mesa, according to authorities there. The Arizona Department of Public Safety found the women Tuesday night when they served a search warrant at the home, department Director Frank Milstead said.

Arizona's attorney general accuses Petersen of defrauding Arizona's Medicaid system for medical expenses of Marshallese women he took there. Another 11 criminal counts were filed by Utah's attorney general against Petersen in that state, including human smuggling, sale of a child and communications fraud.