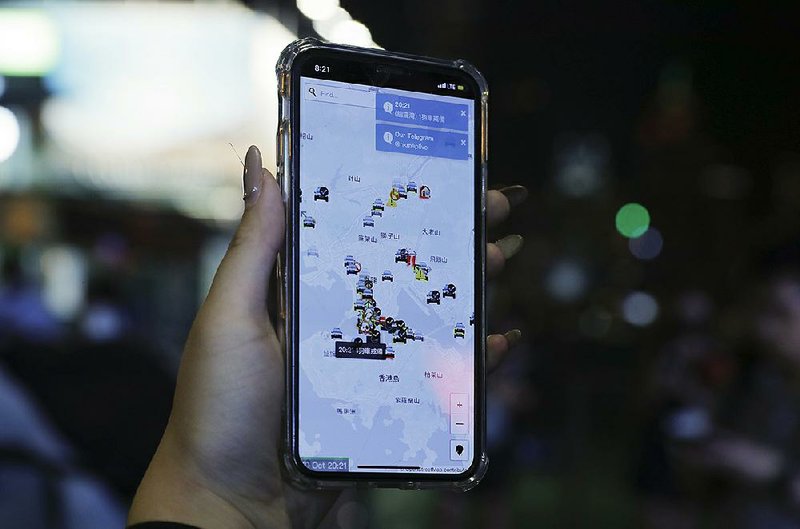 A person’s phone displays HKmap.live apps Thursday as the per- son attends a rally marking Taiwan’s National Day in the Tsim Sha Tsui district in Hong Kong. More photos are available at arkansasonline.com/1011hongkong/

HONG KONG -- Under pressure from China, Apple has removed a smartphone app that enabled Hong Kong protesters to track police. It has cut off access in mainland China to a news app that extensively covered the anti-government demonstrations. And it has made it harder to find an emoji representing the Taiwanese national flag.

The tech company's latest acts of capitulation to China's ruling Communist Party have alienated some Hong Kong consumers and angered democracy activists around the world. But few U.S. companies have as much of their business tethered to China as Apple.

"That's the price you pay if you want to be in the market," said Matt Schrader, a China analyst for the Alliance for Securing Democracy at the German Marshall Fund. "You have to abide by demands to censor information: anything that paints the party or its history, or its top leaders, in an unflattering light, or disagrees with their preferred portrayal of China as a country."

Apple relies on Chinese factories to assemble iPhones, which generate most of the company's profits. Apple has also cultivated a loyal following in the country. China has emerged as the company's third-largest market behind the U.S. and Europe, accounting for 20% of its sales during its past fiscal year.

President Donald Trump's trade war with China has already complicated things for Apple, raising fears that Beijing will impose measures to hurt Apple in retaliation for U.S. tariffs on Chinese products and sanctions against Huawei, the Chinese telecommunications equipment giant.

[Video not showing up above? Click here to watch » https://www.youtube.com/watch?v=1S9nLA1XW4U]

Apple CEO Tim Cook has spent much of the past year walking a thin line, trying to prod a truce between the U.S. and China while also trying to protect his company's interests.

His efforts so far have largely paid off, helping to shield the iPhone from being hit by tariffs in either the U.S. or China. But that could change in mid-December, when the Trump administration has promised to expand import duties on more consumer electronics.

With the specter of those tariffs, Apple has even more of an incentive to placate China's government and avoid provoking Beijing.

In a worst-case scenario, analysts have estimated retaliatory action from China could cut Apple's profit 10% to 20%. That would translate into a loss of $6 billion to $12 billion in a single year, based on Apple's profits last year.

Apple defended its decision Thursday to pull the police-tracking HKmap.live from its online app store. For some people in Hong Kong, the app was a handy tool that helped steer them away from possible baton charges, volleys of tear gas and police ID checks.

But the company said the app "has been used to target and ambush police" and "threaten public safety."

"Criminals have used it to victimize residents in areas where they know there is no law enforcement," Apple said. "This app violates our guidelines and local laws."

Hong Kong's crisis has put pressure on those doing business with China to take sides. The protests were triggered by a now-abandoned government plan to allow criminal suspects to be extradited for trial in Communist Party-controlled courts in mainland China. It has escalated into a broader battle over Beijing's efforts to curb the Western-style civil liberties and autonomy promised to the former British colony when it returned to China in 1997.

Beijing's criticism of Apple followed government attacks last weekend on the National Basketball Association over a tweet by the general manager of the Houston Rockets in support of the protesters. China's state TV canceled broadcasts of NBA games.

One of the police-tracking app's users, Hong Kong office worker Acko Wong, 26, scoffed at the suggestion that the app helped give free rein to criminals.

"How do you ambush a group of police with equipment and gear like helmets and shields?" he asked.

Sharing the skepticism were U.S. politicians like Sen. Josh Hawley, a Missouri Republican who tweeted criticism of the company Thursday: "Who is really running Apple? Tim Cook or Beijing?"

Apple also cut off mainland access to the news app Quartz, which has covered the Hong Kong protests. The news app was still available in Hong Kong.

Apple also recently removed an emoji representing the Taiwanese flag -- which China doesn't recognize -- from the virtual keyboard of its smartphone operating system in Hong Kong and Macau. The emoji could still be found if users searched for it.

The latest moves are on top of Beijing's previous demands that Apple remove virtual private network apps from its online store in China. China has sought to tighten control over VPNs, which create encrypted links between computers and can be used to see blocked websites that the government has deemed subversive.

Information for this article was contributed by Michael Liedkte of The Associated Press.