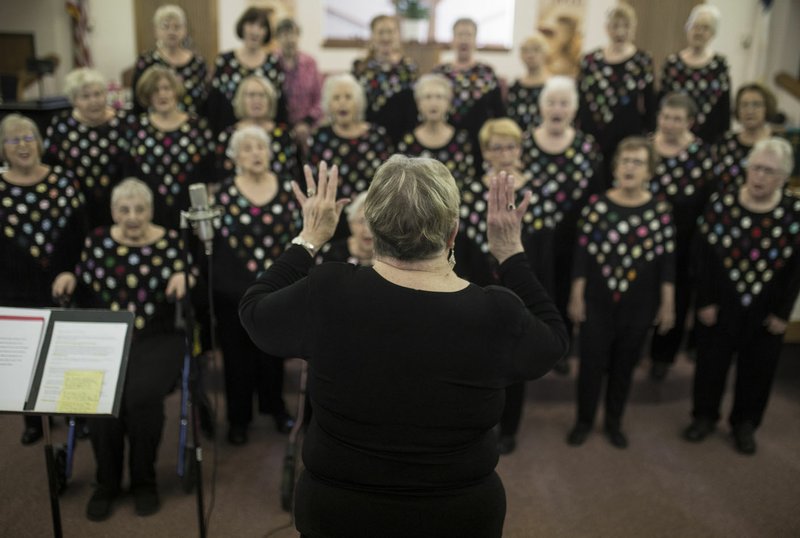 It's true that it begins with the music, but that's not the only reason these women come from Bella Vista, Gravette, Bentonville -- and sometimes further afield -- to raise their voices in song.

"Perfect Harmony isn't just a singing group," says Ann Glover, who sings bass in the four-part barbershop harmony. "We are a community of caring, sharing, giving ladies who check in on each other, share our joys and concerns, and who love laughing together -- and singing, of course."

This month, the chorus marks its 20-year anniversary with a concert at 2 p.m. Oct. 13 at Highland Christian Church in Bella Vista. Director Karen Frankenfeld promises Christmas favorites, patriotic songs, love songs, gospel arrangements and a salute to Bob Benson, who has in the past arranged songs for Perfect Harmony.

But again, the event is so much more -- an affirmation, a celebration, a reunion and a recruiting tool.

"We need to celebrate our 20th anniversary to let people know we are still singing and are very good," Frankenfeld says. "We have invited former members to come to the concert, and they will sing with us on the final three numbers."

And, adds Glover, "I hope that some will consider joining us in the joy of making harmonies together. No real talent required -- just the love of singing!"

Perfect Harmony, a women's barbershop chorus, was founded 20 years ago by Frankenfeld, who has a bachelor's degree in music education K-14, a master's degree in counseling and additional graduate-level hours in music.

"We moved to Bella Vista in 1999, and there was a women's barbershop chorus here," she remembers, "but the director had to return to her home state, and it fell apart. I was asked if I would be interested in directing a barbershop chorus, and so we began to see what interest we had in the area. We first met at a beauty shop, and as we grew, moved to a church choir room." 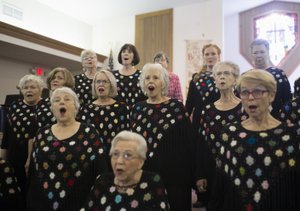 NWA Democrat-Gazette/CHARLIE KAIJO "We need to celebrate our 20th anniversary to let people know we are still singing and are very good," says director Karen Frankenfeld. "We have invited former members to come to the concert, and they will sing with us on the final three numbers."

"Karen is what holds us together -- her dedication, her talent, her love of life," says Marty Shreve, who sings baritone. "All of the women that sing seem to have the same desire -- to sing, to laugh and have fun. I like that."

Shreve says she has been singing in choral groups since she was a 14-year-old in Cheyenne, Wyo., and even "played around with singing in a country-western band and a gospel quartet during my 20s."

"My love of music was probably inspired by my father," she muses. "He too loved music. It's an outlet for me, an expression of my joy."

Sue Barrett, also a baritone, started singing at an even earlier age than Shreve.

"I was next to the youngest [of seven sisters], and our mother made them let me sing with them," she remembers. "We had no music, just songs we had heard on the radio. They always made me sing the harmony part, and I learned very quickly my voice better fit in the chord, and I truly believe that is why I love the baritone part of barbershop. 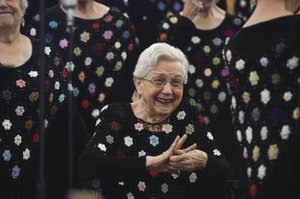 NWA Democrat-Gazette/CHARLIE KAIJO Dolores Haley gets settled before singing during a rehearsal for the Perfect Harmony women's barbershop chorus' 20th anniversary concert. Founded by Karen Frankenfeld, the chorus marks its anniversary with a concert at 2 p.m. Oct. 13 at Highland Christian Church in Bella Vista.

"At every family gathering -- aunts, uncles, cousins, grandparents, etc. -- the sisters were asked to sing," Barrett adds. "It has been the one constant in my life, for no matter where I lived, there was always a church choir or some other group to join."

Barrett found Perfect Harmony through a church friend. Shreve says when she moved to Bella Vista she "needed an outlet for my love of music," attended a program and, as Glover says, "I knew right away that they were my tribe and joined them soon after."

Frankenfeld points out there are no auditions for Perfect Harmony, just a desire to sing and "make life better for yourself and others."

"I choose music from the '30s, '40s, '50s and '60s," she says, "as the people we entertain are older folks. We have performed in Tulsa, Joplin, Fayetteville and many towns in between, for service groups, senior citizens, skilled living facilities and anyone who wants entertainment. We need to sing songs they are familiar with so they can hum along."

"I think I enjoy our sing-outs the most -- usually at retirement homes -- especially when the audience is engaging or singing along with us," adds Glover.

"To watch the residents sing along with us and their eyes light up is a sincere joy," agrees Susan Wildman, who sings lead.

Women's barbershop choruses have four sections: lead and tenor for higher voices, and baritone and bass for those with lower voices, Shreve explains, saying Frankenfeld carefully researches music so it fits both the members and the audiences.

"The chorus' portfolio may include modern pop, seasonal songs, patriotic, gospel and novelty numbers," she says. "Some songs give Karen an opportunity to add a special touch to the arrangement and to let the women have a little fun with hand gestures or swaying to the music."

"Karen sets the tone as her vision was a group of women who had fun singing and entertaining, as well as creating a sisterhood relationship within the chorus," adds Barrett. "I have become friends with so many wonderful women I would not have known otherwise."

The current membership numbers 26, Frankenfeld says, but 40 members isn't unusual historically. Singers rehearse from 4 to 5:30 p.m. every Monday in the choir room at the United Lutheran Church of Bella Vista on Cooper Road.

"We memorize our music, so it is important we keep on singing," says Frankenfeld. "The chorus is an opportunity to be part of a sisterhood through singing and a love of music, as well as a musical outlet for all women."

As far as the anniversary concert goes, Glover hopes "the audience goes home with a smile on their face, a spring in their step, and a renewed excitement for barbershop music."

And Barrett adds, "a song in their heart."

FYI: Rehearsals are held from 4 to 5:30 p.m. every Monday in the choir room of the United Lutheran Church of Bella Vista on Cooper Road. Interested women are always welcome.