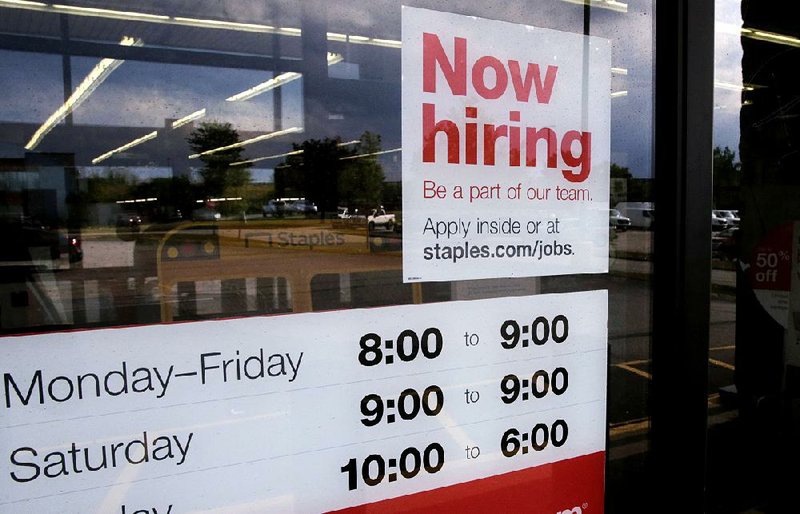 WASHINGTON -- U.S. job openings fell 1.7% in August and hiring edged down, bolstering views that the labor market may lose momentum as economic uncertainty and a manufacturing recession squeeze employers.

The Labor Department said employers advertised 7.1 million available jobs in August, down from 7.2 million in July. Job openings reached a peak of 7.6 million last November but have fallen by about 500,000 since then. This is the third-straight month that job openings have dropped, slumping to the lowest level since March 2018. The quitting rate, which indicates worker confidence in finding a new job, fell back to its summer rate of 2.3%.

Hiring decreased to 5.78 million while the number of people separated from their jobs pulled back from an 18-year high, falling to 5.64 million.

"The labor market, by many metrics, remains strong, but it's losing momentum," economist Nick Bunker at hiring site Indeed.com said in a note. "Employers are pulling back on hiring. [The latest] numbers give credence to the argument that the labor market slowdown is driven by employer demand."

The decline in openings was led by a 61,000 drop in leisure and hospitality jobs that brought the level to the lowest since 2017. The information, manufacturing and finance industries also posted declines.

Declines in the manufacturing and information sectors may have affected regional levels. In the Midwest, job openings plunged 10.8%. Openings also fell in the West, while increasing in the Northeast and South.

Still, some signs suggest the labor market remains strong. There are 1.2 job openings for every unemployed person, suggesting that many businesses still remain hungry for workers.

The job market has been a critical buffer against an economic downturn, as it gave Americans the confidence to spend freely. A yearlong trade war with China has hit manufacturing and weakened business investment, but consumer spending has so far propelled the economy forward.

Although it lags a month behind other Labor Department data, the Job Openings and Labor Turnover Survey adds context to monthly employment figures by measuring dynamics such as resignations, help-wanted ads and hiring.

Information for this article was contributed by Bani Sapra of The Associated Press and by Reade Pickert of Bloomberg News.