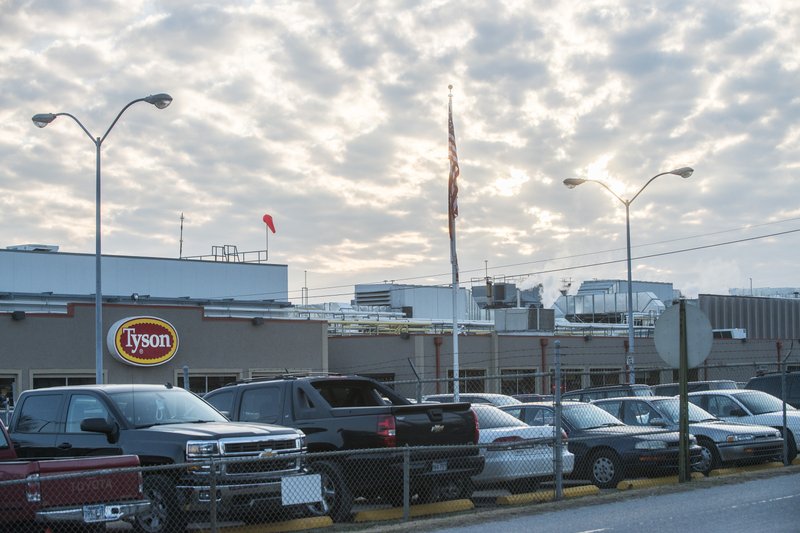 The Tyson Foods plant Wednesday on Olrich Street in Rogers is seen in this 2014 photo. - Photo by Anthony Reyes

Beef prices are cooling after a fire at a Kansas processing plant sent them haywire a couple of months ago, an industry economist reported this week.

"It appears that after about seven weeks, the majority of outward market reactions to the fire have passed," Derrell Peel, a Oklahoma State University livestock specialist, said in a cattle market newsletter.

The fire that indefinitely closed a Tyson Fresh Meats plant in Kansas sent prices for individually packaged beef and cattle futures rising in the ensuing weeks. Choice packaged beef climbed 11% to $239.87 per hundredweight two weeks after the fire. The price has since dropped lower than $214.

Cattle futures also reacted dramatically to the fire and have since recovered, with prices for cattle fattened in feedlots and ready for slaughter taking the "biggest hit," Peel said. That was expected because of the sudden closure of the processing plant, he said.

Prices for feedlot-fattened cattle dropped more than 5% to $106.68 per hundredweight in the week after the fire, data show, and later bottomed out five weeks after the fire at $100.07 before recovering. They were $107.12 by the first week October.

To counter the effects of the plant's closure, feedlots and packing plants resorted to "significant logistical contortions" to reroute cattle to other facilities, Peel said, a process that continues.

After the market price fluctuations, the U.S. Department of Agriculture's packers and stockyards division opened an investigation into the matter to see if there is any evidence of collusion, price manipulation or other unfair practices.

The Tyson plant in Holcomb, Kan., received heavy fire damage on Aug. 8, causing it to close indefinitely and idling some 3,800 workers. That resulted in an immediate loss of beef in wholesale markets, which left beef buyers scrambling and Tyson in a bind to meet contractual obligations, Peel said.

After the plant's closure, Tyson's Fresh Meats President Steve Stouffer said the company would provide "guaranteed pay" to workers until the plant is operational again.

The plant can process about 6,000 head of cattle per day, or 15% to 25% of Tyson's total beef capacity, according to a Stephens Inc. analysis.

There are plans to rebuild the plant, but Tyson has not said when it will reopen.

Peel estimated that tight packing capacity will continue to restrict prices for feedlot-fattened cattle somewhat, but it appears the industry has avoided more serious pitfalls.

"Certainly there are impacts and additional costs still being incurred by buyers and sellers to deal with the impacts of the closed packing plant," Peel said. "Though some in the industry were surprised and frustrated with market reactions after the fire, the type and duration of price behavior are exactly what is predicted by market economics."