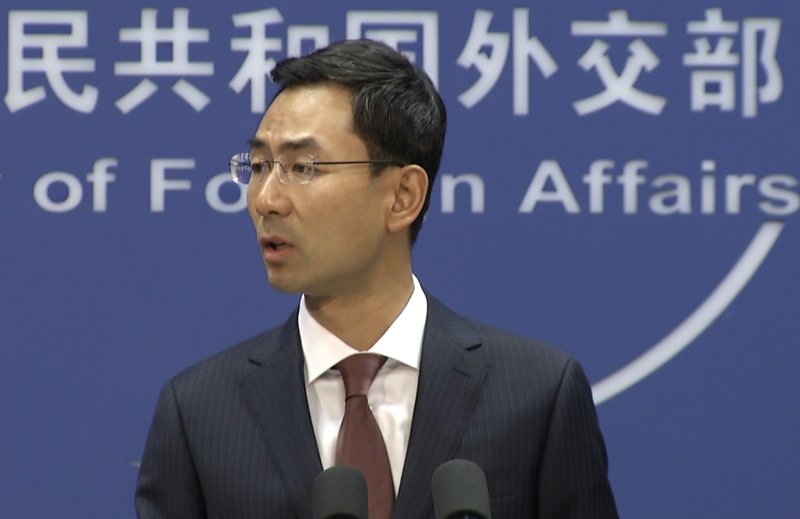 In this image made from video, Chinese Foreign Ministry spokesperson Geng Shuang speaks during a press briefing in Beijing Tuesday, July 11, 2017.

China signaled that it would hit back after President Donald Trump's administration placed eight of the country's technology giants on a blacklist over reported human-rights violations against Muslim minorities. At the same time, the Trump administration is moving ahead with discussions around possible restrictions on portfolio flows into China, with a particular focus on investments made by U.S. government retirement funds, people familiar with the internal deliberations said.

"We urge the U.S. side to immediately correct its mistake, withdraw the relevant decision and stop interfering in China's internal affairs," Geng said in Beijing. "China will continue to take firm and forceful measures to resolutely safeguard national sovereignty, security and development interests."

The Trump administration's move, which was announced after U.S. markets closed, came on the same day as negotiators from the two sides began working-level preparations for high-level talks set to begin Thursday in Washington. A U.S. Commerce Department spokesman said the "action is unrelated to the trade negotiations," and China confirmed that Vice Premier Liu He would lead the delegation as planned.

The blacklist, first reported by Reuters, still takes President Donald Trump's economic war against China in a new direction, marking the first time his administration has cited human rights as a reason for action. Past moves to blacklist companies such as Huawei Technologies Co. have been taken on national security grounds.

China has plowed billions of dollars into companies developing advanced hardware and software to catch up with the United States. Some of the companies added to the list Monday are among the world's most valuable artificial-intelligence startups.

Much of that technology -- including facial recognition and computer vision -- can be used to track people. That includes smartphone tracking, voice-pattern identification and systems that track individuals across cities through powerful cameras. Washington officials have grown increasingly worried about China's ambitions to export its systems elsewhere, including places known for human-rights abuses.

Entities on the list are prohibited from doing business with American companies without being granted a U.S. government license, although some have maintained relationships with banned companies through international subsidiaries.

"Specifically, these entities have been implicated in human rights violations and abuses in the implementation of China's campaign of repression, mass arbitrary detention, and high-technology surveillance against Uighurs, Kazakhs, and other members of Muslim minority groups" in Xinjiang, the U.S. Commerce Department said in a Federal Register notice published Monday.

The foreign ministry's Geng accused the U.S. of having "sinister intentions." "The measures taken by China to eliminate extremism from the roots are fully in line with Chinese law and international practice," he said.

SenseTime and Dahua weren't immediately available for comment outside of normal business hours.

"Hikvision strongly opposes today's decision by the U.S. government and it will hamper efforts by global companies to improve human rights around the world," the company said in a statement.

Megvii said the U.S. had "no grounds" to put it on the list, and noted that Human Rights Watch had corrected a report that implicated the company. It added that it hadn't earned revenue from Xinjiang in the first part of the year, and the impact on its business from the designation was minimal.

The move targets Chinese surveillance companies involved in the crackdown in Xinjiang, where as many as a million Uighur Muslims have been placed in mass detention camps, prompting criticism from around the world. The White House in May had readied the sanctions package for surveillance technology companies accused of human rights violations, but decided to hold back because of the trade negotiations.

Meanwhile, the Trump administration efforts to restrict investment portfolio flows into China are advancing even after American officials pushed back strongly against a Bloomberg News report late last month that a range of such limits was under review.

According to people familiar with the meetings, the administration's focus is now on ways to further scrutinize index providers' decision to add Chinese firms they consider a material risk for American investors. It's still unclear what legal authority the White House would rely on to force major indexes to drop certain Chinese companies.

At least one of the issues under consideration is time-sensitive. The Federal Retirement Thrift Investment Board in 2017 made a decision that by mid-2020 the international fund offered to workers in the government's retirement savings plan would mirror the Morgan Stanley Capital International All Country World Index, which captures emerging markets, including China. The board is scheduled to meet Oct. 21.

Some U.S. lawmakers and China critics outside the government have pushed the board to reverse that decision and, if necessary, have the administration use executive power to protect U.S. government workers. They argue that Americans are harmed by channeling money into Chinese firms that are suspected of human-rights violations and at the center of U.S. national security concerns.

The change would expose almost $50 billion in retirement assets of federal government employees, including members of the U.S. Armed Forces, to severe and undisclosed material risks associated with many of the Chinese companies listed on the index, opponents argue.