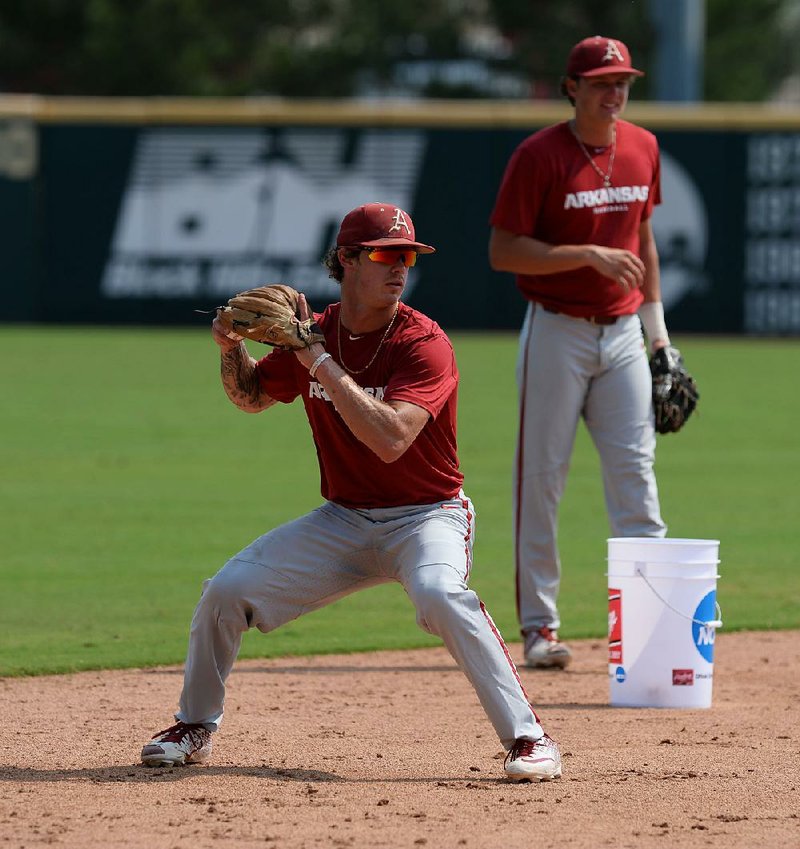 Arkansas junior shortstop Casey Martin (center) will be out for the rest of fall practice after breaking a bone in his hand. Martin had surgery on his left, nonthrowing hand Monday and is expected to be able to swing a bat again in 4-5 weeks. - Photo by Andy Shupe

Arkansas' Martin out with broken hand

University of Arkansas shortstop Casey Martin will be out for the rest of fall practice after breaking a bone in his hand.

Martin, a junior, broke the hamate bone in his left, nonthrowing hand while batting during practice late last month and had surgery to repair the injury Monday, a team spokesperson said. Martin is expected to be able to swing a bat again in 4-5 weeks.

The Razorbacks begin preseason practice in January and are scheduled to open the season Feb. 14.

The injury is the second this year for Martin, who nursed a shoulder injury while not playing competitively this summer. Martin batted .286 with 15 home runs and 57 RBI, and fielded .912 with an SEC-high 23 errors as a sophomore in his first season playing shortstop.

Martin is a top draft prospect in 2020. Baseball America recently projected him to be drafted sixth overall by the Seattle Mariners next year.

The University of Arkansas finished seventh at the Jerry Pate Intercollegiate in Vestavia Hills, Ala., on Tuesday.

The Razorbacks finished the 54-hole tournament with an 852. Brigham Young won the event with an 823, beating Colorado State in a playoff. Auburn was third with an 827.

Arkansas State University finished fifth and the University of Arkansas at Little Rock finished tied for sixth at the Maridoe Intercollegiate in Carrollton, Texas.

The Red Wolves shot a 909 while the Trojans and New Mexico finished one shot back at 910.

SMU won the tournament with an 882. San Francisco and Texas A&M finished tied for second with a 906.

Williams Baptist College finished eighth with a 604 at the Redhawk Fall Classic in Athens, Ala. University of Mobile won the event with a 575 while William Carey was second with a 581.

Henderson State University shot a 613 to finish fifth at the Midwest Classic in Warrensburg, Mo.

Northeastern State won the tournament with a 596, and Central Oklahoma was second with a 604.

Harding University finished 14th at 641, and the University of Arkansas at Fort Smith finished tied for 21st at 670.

Arkansas Tech University shot a 613 to finish sixth at the Golfweek DII Fall Invitational in Howey in the Hills, Fla.

Saint Leo won with a 598. Dallas Baptist was second at 599, and Florida Southern was one stroke back at 600.

Individually, Jacqueline Klemm of Arkansas Tech finished third with a 147 (78-69).

Williams Baptist College finished fourth at the Redhawk Fall Classic in Athens, Ala.

Williams Baptist shot a 664. Loyola University of New Orleans won with a 615. Wallace State Community College was second at 637, and Blue Mountain College was third at 651.

Melanie Spurgeon and Jessica Woessner of Harding University were named offensive player and goalkeeper of the week by the Great American Conference, while Carmen Scott of Ouachita Baptist University was named defender of the week.

Scott led the Tigers' defense in a 2-1 victory against Oklahoma Baptist, holding the Bison to nine shots. In a 1-0 victory over Southern Nazarene, Ouachita Baptist held Southern Nazarene to four shots on goal.

Maryn Jones and Citlalli Aceves scored goals in the 29th and 32nd minutes of the first half.

Paige Carlyle made two saves in the victory.

Lyon (12-9, 3-3 American Midwest Conference) was led by Gracen Ratliff, who had 12 kills and nine digs. Cassidy Garrett and Magee Hobson had 14 assists. Erin Haigwood had 13 digs.