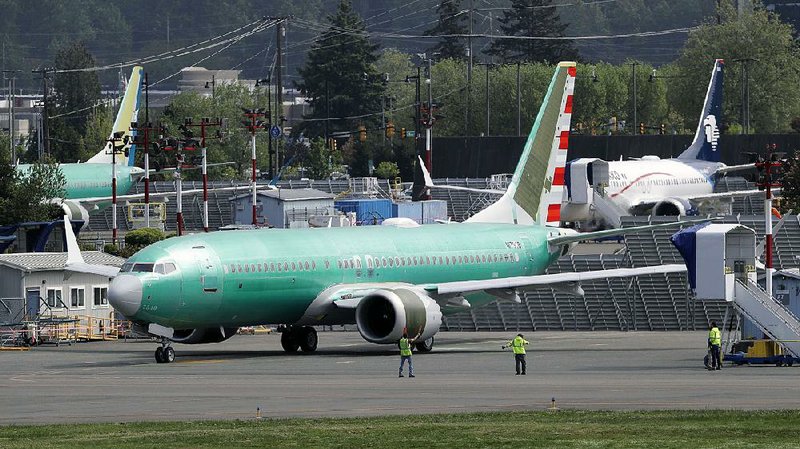 The Southwest Airlines Pilots Association has sued Boeing Co., saying the grounding in March of the company’s 737 Max airliners has resulted in lost wages and other costs.

DALLAS -- Southwest Airlines pilots are suing airplane-maker Boeing Co. for financial losses from the grounding of the 737 Max.

The union says the Dallas airline has lost more than 30,000 scheduled flights since the Federal Aviation Administration grounded the jets in March. Pilots, they say, have lost $100 million in wages since the grounding.

"Boeing knew or should have known that the 737 Max was unsafe, un-airworthy, and placed [Southwest Airlines] pilots, the passengers in their care, and others, in danger," says the lawsuit filed by the Southwest Airlines Pilots Association.

Boeing 737 Max jets have been grounded worldwide since March after plane crashes in Ethiopia and Indonesia killed a combined 346 passengers and crew members. The crashes have been linked to a faulty software system and sensor meant to keep the plane flying level.

"As pilots, there is nothing more important to us than the safety of our passengers," said a statement from Capt. Jon Weaks, president of pilots association. "We have to be able to trust Boeing to truthfully disclose the information we need to safely operate our aircraft. In the case of the 737 Max, that absolutely did not happen."

Boeing hoped to get the planes flying within a few weeks of the grounding, but it's been nearly seven months.

The aircraft maker reported Tuesday that its deliveries of airliners to customers in September plunged 70% from the level of a year earlier.

The plane manufacturer said in an email to Bloomberg that it considers the lawsuit to be "meritless."

"We will continue to work with Southwest Airlines and its pilots on efforts to safely return the Max to service," Boeing said.

Andrew Watterson, chief revenue officer for Southwest, said the airline has lost about 10% of its flying capacity because it operated 34 Max jets at the time of the grounding and additional planes were to be delivered throughout the year.

Southwest said it doesn't expect to fly the Max again this year, but Weaks said it probably won't be back in service until at least March.

Boeing is working to complete changes to the Max's flight-control software and computers. The software triggered nose-down pitches that pilots were unable to overcome in the two crashes.

Boeing has earmarked $4.9 billion to pay for Max-related matters, including payments to those killed in the crashes. Southwest Airlines chief executive Gary Kelly said the company is talking with Boeing and said he hopes to provide some money from a settlement to employees, including pilots.

The Southwest pilots union took it a step further with the lawsuit, saying the company's 10,000 pilots have seen reduced work hours from the 737 Max being grounded.

In the lawsuit filed in Dallas County, the union is accusing Boeing of taking safety shortcuts.

"Boeing made a calculated decision to rush a re-engined aircraft to market to secure its single-aisle market share and prioritize its bottom line," the lawsuit said. "In doing so, Boeing abandoned sound design and engineering practices, withheld safety critical information from regulators and deliberately misled its customers, pilots and the public about the true scope of design changes to the 737 Max."

At both Southwest and Fort Worth-based American Airlines, leaders are trying to convince the public that the 737 Max will be safe to fly again. Without the jets, each airline faces a sizable shortage of aircraft.

At a conference last week, Allied Pilots Association President Eric Ferguson said American Airlines will look for compensation from Boeing in the same way that Southwest pilots are.

American Airlines CEO Doug Parker said talks with Boeing about compensation are still preliminary, but he said money for affected employees would likely come from profit-sharing.

Southwest and Boeing also are facing a lawsuit from Southwest customers, who say each company was aware of problems with the 737 Max when it was still flying and sold tickets despite safety risks.

Boeing said Tuesday that it delivered 26 airliners in September, down from 87 a year earlier and trailing the 71 reported by its European rival Airbus. Over the first nine months of the year, Boeing delivered 302 airplanes, compared with 571 by Airbus.

The 737 Max accounted for virtually the entire drop in Boeing shipments. Last month, the Chicago company delivered just two 737s -- previous versions of the plane, not the Max -- compared with 61 a year earlier, when it was ramping up Max production.

The 737 is a longtime airline favorite for short and medium routes, and the Max, which debuted in 2017, was designed to be a more fuel-efficient update.

Meanwhile, Boeing has agreed to invest $20 million for a minority stake in Virgin Galactic, a startup that is preparing to fly its customers into space next year.

The relationship is designed as a collaboration aimed at shaping the future of human space travel, the companies said in a statement Tuesday. Virgin Galactic also is setting longer-term sights on shuttling airline travelers around the world at high speeds -- a mode of transport that will take years to achieve.

The deal positions the companies to explore the marketplace for airline travel at hypersonic speeds above the Earth's atmosphere, trimming trips across the globe to two hours or less. Elon Musk's Space Exploration Technologies Corp. also has announced plans for such flights in the future.

The future of high-speed airline travel is "a big chess board" with numerous engineering, technological and financial issues to resolve, he said in an interview. "We can really start to dig into some of these questions that need to be put in place."

Information for this article was contributed by Kyle Arnold of The Dallas Morning News; by David Koenig of The Associated Press; and by Justin Bachman of Bloomberg News.