Pine Bluff council votes to grab chunk of new-tax cash; funds meant for revitalization instead to go to city budgets 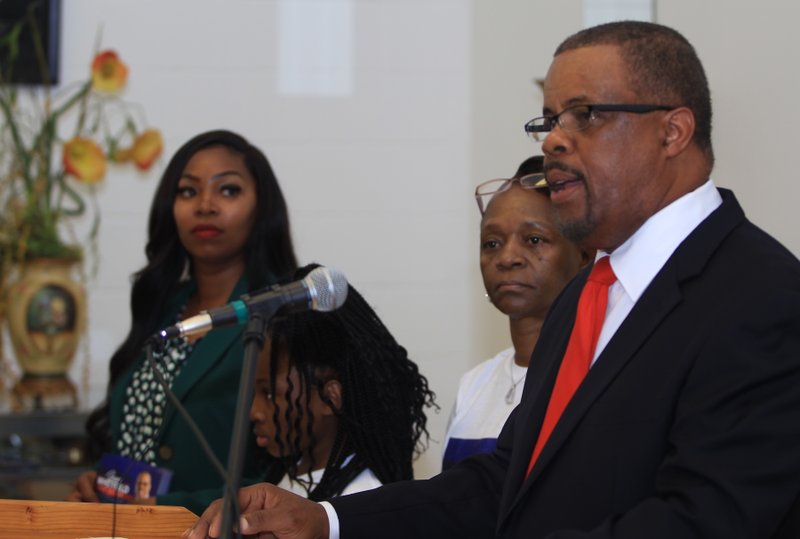 PINE BLUFF -- When political and civic leaders in Pine Bluff campaigned in 2017 in support of a temporary, seven-year, five-eighths percent sales tax, they told voters the estimated $4.5 million in extra annual revenue would be used to boost efforts to revitalize the city.

Instead, by a 5-3 vote of the City Council on Monday night, almost half of that money -- $2.1 million a year -- will be diverted to shore up department budgets.

The resolution voted on by the council allocates $300,000 each to the Police Department, youth and community resources, and the convention center, and another $200,000 to the Fire Department. Another $1 million will be allocated to drainage needs.

The decision is legal -- the ballot title never put the political promise in writing -- but the shift of the money could create voter mistrust in future elections and, according to Go Forward Pine Bluff Director Ryan Whatley, jeopardize the public-private partnership that has been trying to help the city economically by building up its population, tax base and development efforts.

Unless the decision is veto­ed by Mayor Shirley Washington, it could result in the loss of about $10.5 million in funding for Go Forward Pine Bluff over the next five years. The economic plan for the organization is dependent upon $32 million the sales tax is projected to generate over seven years, and $19 million in private funds raised from the business community, according to Whatley.

Also at risk is nearly $51 million in economic improvement projects and initiatives, some of which are already underway, Whatley said.

"While it may appear to be a small piece of the pie, it's actually a large piece," Whatley said. "Out of that money, we've already invested $4 million in getting the aquatic center completed. We've taken on renovation of the Merrill Center, which is close to $1 million. These are things that have been on the city's agenda for a long time, and otherwise, there would have been no funds to complete these things.

"We're glad to do these things, but we're already at close to $5 million, and that's before the revitalization efforts that are the reason we're here," Whatley added. "Now, pull another $2.1 million away from that and this thing's getting away from us."

Whatley said an initiative that is part of the organization's mission, Teach Pine Bluff, also could be jeopardized. The initiative funds certified teachers in the Pine Bluff, Dollarway and Watson Chapel school districts who are interested in going back to school to complete master's degrees.

Also supported by the sales tax is a grant writer who recently wrote a youth-engagement request for the city that resulted in $800,000 in funding, Whatley said. The organization also has acquired 4 acres near downtown with plans to redevelop it.

"There are a lot of things going on behind the scenes that are about to become very apparent that we are working on," Whatley said.

Go Forward Pine Bluff began in late 2015 with a focus on four interconnected areas: education, economic development, infrastructure/government and quality of life. About 100 community members worked for a year on the plan, ironing out details and working on funding.

Go Forward Pine Bluff is governed by an independent committee, of which the mayor is a member. Tax revenue flows through the city and requires approval by the City Council before being routed to the initiative for which it is intended.

Council Member Steven Mays, who voted Monday for the change, said the Go Forward Pine Bluff initiative was flawed from the beginning.

"You have too many controlling special interests factors controlling the money," Mays said. "I wish the city of Pine Bluff would have went on and got that five-eighths-cent tax then and let the mayor and council run that. We have vision. We know what we're doing."

Council Member Ivan Whitfield, the city's former chief of police, sponsored the resolution to divert the funds to the police and fire departments, drainage needs, youth and community resources, and the convention center. He announced in May that he will oppose Washington for the mayor's position in next year's Democratic primary.

Council members Donald Hatchett, Bruce Lockett and Lloyd Holcomb Jr., joined Whitfield and Mays in voting for the resolution to move the funds.

Whitfield said he crafted the resolution because the city has too many unmet needs.

"For 10 months I've heard the plight of the citizens of Pine Bluff about drainage and about our children," he said. "I've heard department heads talk about the needs of the city. What I did was assess those things I heard and see how we can make an impact for stability."

Whitfield said city department budgets are already strained to the breaking point, and the only option for additional revenue was the sales tax.

"Knowing that was a general-use tax, it was in the best interests to ask the council to reappropriate some of that money to places where we need to fix some of the problems we have but we don't have the money," Whitfield said.

Whitfield said he felt justified in trying to reallocate the money even though the sales tax was sold to voters in 2017 as being earmarked for Go Forward Pine Bluff, with voters passing the measure by a nearly 3-to-1 margin.

"The ballot states a general use tax," Whitfield said. "Because of that, everything that Go Forward is doing now, none of that was on the ballot itself. It's imperative that we remember this: That when we are elected, even when the people say, 'Let's do A,' they sent us to vote on their behalf. When we, as a council member, see something wrong, we are their voice. We are their vote."

Alexander said Whitfield's resolution was improper because of the amount of money it dealt with and because there was no discussion of the resolution with other council members.

Alexander said the council vote runs contrary to the will of Pine Bluff voters.

"It gives power to the people in the community who don't vote but who still complain," she said. "Seventy-three percent of those who voted in favor of that, with that being overturned, that isn't right.

"Wait the seven years. The City Council in their capacity could have come up with their own plan and gotten the voters on board with it, but we didn't, and they supported Go Forward. So give them their seven years."

Alexander added that because of the amount of money concerned, the resolution should have been vetted by running it through the various standing committees concerned such as the public-safety and public-works committees.

Trafford, chairman of the public-safety committee, which deals with issues affecting the police and fire departments, agreed.

"It absolutely should have gone through public safety," Trafford said. "We're not against funding these things, we're against the method. We shouldn't be taking it from Go Forward Pine Bluff."

Brown said he was surprised the resolution passed the council, pointing out that the effort to get voters to approve the measure was explicit in how the money would be used even though the ballot title was not.

"Certain things were promised to the voters," Brown said. "To reallocate that, to change it, is to basically be going against the voters of Pine Bluff."

Washington, the mayor, serves on the Go Forward Pine Bluff board and has been a staunch supporter of the public/private partnership. She said she was disappointed by the vote and is considering vetoing the measure.

Washington said she had been aware for several days that the resolution was going before the council, but she said she was caught off guard by the outcome of the vote.

"I really felt like, worst case, it would be 4-4 and it would have simply died right there," she said. "It hurts me that we're doing this at this time, because I feel like we're moving forward.

"Maybe not at the pace we want to, but we have so much to do that it's going to take time."