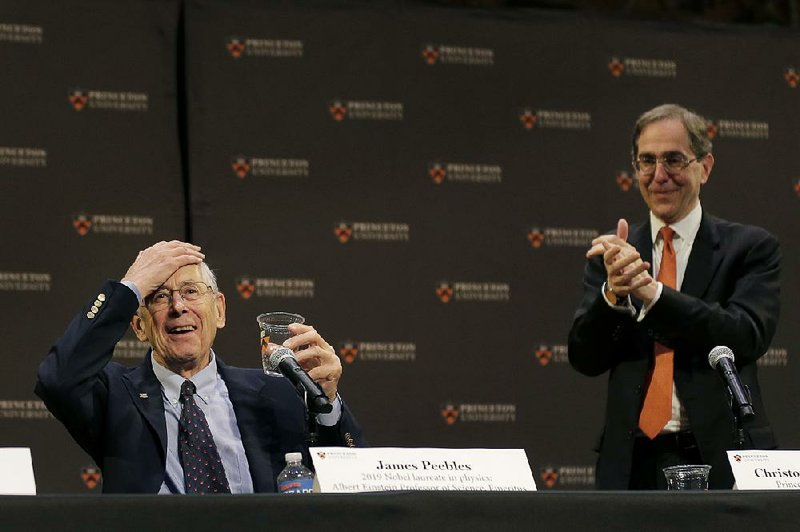 STOCKHOLM -- A Canadian-American cosmologist and two Swiss scientists won this year's Nobel Prize in physics on Tuesday for exploring the evolution of the universe and discovering a new kind of planet, with implications for that nagging question: Does life exist only on Earth?

Canadian-born James Peebles, 84, an emeritus professor at Princeton University, won for his theoretical discoveries in cosmology. Swiss stargazers Michel Mayor, 77, and Didier Queloz, 53, both of the University of Geneva, were honored for finding an exoplanet -- a planet outside the solar system -- that orbits a sun-like star, the Nobel committee said.

"This year's Nobel laureates in physics have painted a picture of the universe far stranger and more wonderful than we ever could have imagined," said Ulf Danielsson of the Royal Swedish Academy of Sciences, which selected the laureates. "Our view of our place in the universe will never be the same again."

Peebles, hailed as one of the most influential cosmologists of his time who realized the importance of the cosmic radiation background born of the Big Bang, will collect one half of the $918,000 award. Mayor, who is an astrophysicist, and Queloz, an astronomer who is also at the University of Cambridge in Britain, will share the other half.

[Video not showing up above? Click here to watch ª https://www.youtube.com/watch?v=x9F6Oh_bmq0]

The Nobel committee said Peebles' theoretical framework about the cosmos -- and its billions of galaxies and galaxy clusters -- amounted to "the foundation of our modern understanding of the universe's history, from the Big Bang to the present day."

His work, which began in the mid-1960s, set the stage for a "transformation" of cosmology over the past half-century, using theoretical tools and calculations that helped interpret traces from the infancy of the universe, the committee said.

Mayor and Queloz were credited with having "started a revolution in astronomy" notably with the discovery of exoplanet 51 Pegasi B, a gaseous ball comparable with Jupiter, in 1995 -- a time when, as Mayor recalled, "no one knew whether exoplanets existed or not."

"Prestigious astronomers had been searching for them for years, in vain," Mayor said.

The committee said more than 4,000 exoplanets have since been found in the Milky Way.

"Mayor and Queloz pioneered the path that will allow our generation to address one of the most exciting questions in science: Are we alone?" wrote Avi Loeb, chairman of the Harvard University astronomy department, in an email.

"We now know that about a quarter of all stars have a planet of Earth's size and surface temperature, with the potential of hosting liquid water and the chemistry of life on its surface," he said.

Queloz was meeting with other academics interested in finding new planets when the press office at Cambridge University interrupted to tell him the big news: He had won the Nobel. He thought it was joke at first.

"I could barely breathe," Queloz said. "It's enormous. It's beyond usual emotions. My hand was shaking for a long time. I'm trying to digest it."

Swedish academy member Mats Larsson said this year's was "one of the easiest physics prizes for a long time to explain."

The cash prize comes with a gold medal and a diploma that are received at a ceremony in Stockholm on Dec. 10, the anniversary of the death of prize founder Alfred Nobel in 1896.

This was the 113th Nobel Prize in physics awarded since 1901.

Information for this article was contributed by Jan M. Olsen, Jamey Keaten, Danica Kirka, Christopher Chester and Malcolm Ritter of The Associated Press. 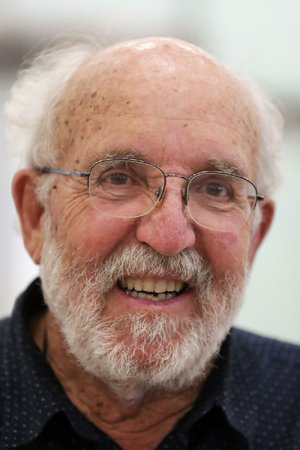 Photo by AP/MANU FERNANDEZ
Swiss scientist Michel Mayor smiles after landing at the Barajas airport in Madrid, Tuesday, Oct. 8, 2019. Mayor has been jointly awarded the 2019 Nobel Prize in Physics along with Professor Didier Queloz and Professor James Peebles for their pioneering advances in physical cosmology, and the discovery of an exoplanet orbiting a solar-type star. 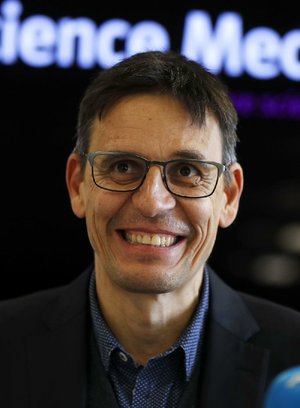 Photo by AP/Frank Augstein
Professor of Physics at the Cavendish Laboratory and Geneva University, Didier Queloz, speaks to the media at the Science Media Centre in London, Tuesday, Oct. 8, 2019. Queloz from the University of Cambridge has been jointly awarded the 2019 Nobel Prize in Physics along with Professor James Peebles and Professor Michel Mayor for their pioneering advances in physical cosmology, and the discovery of an exoplanet orbiting a solar-type star.