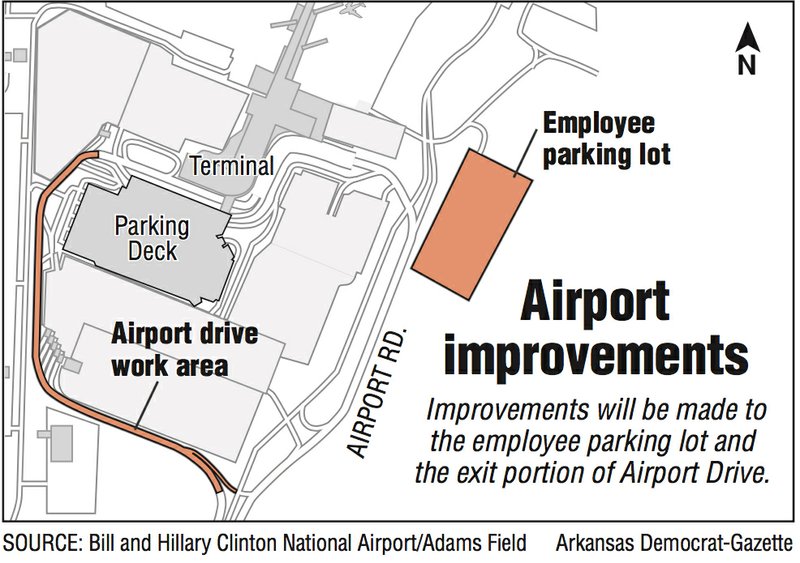 A map showing the area of airport improvements.

Another project to improve parking at Bill and Hillary Clinton National Airport/Adams Field will cost nearly $300,000, raising to more than $4 million the amount the state's largest airport has spent on improvements to its parking lot and parking systems in the past four years.

The latest work focuses on the employee parking lot and the exit from the passenger terminal to Airport Drive.

Redstone Construction Group of Little Rock was the only contractor to submit the a bid -- $285,915. Under the terms of the contract, the company would complete the work on the employee lot in 10 days and on the exit portion of Airport Drive in 14 days.

The scope of work includes full- and partial-depth repairs to the asphalt, application of an asphalt surface treatment, crack cleaning and sealing, pavement markings and maintenance of traffic during the project.

The project comes as work is underway to replace all airport signs, including 47 overhead signs, many of which direct drivers to the airport's various parking lots. That work is proceeding under a $570,000 contract the Little Rock Municipal Airport Commission approved in July.

Last year, the airport completed improvements to three parking lots for $340,000. A fourth lot was repaired in 2017 under a $77,000 project that included consolidation of the handicapped parking spaces and placing them closer to the terminal.

The work to improve parking kicked off in 2015 when the airport spent $2.8 million to replace its revenue and control system.

The upgrade allowed the airport to become the first in the United States to be compliant with the new processing system required with the latest generation of credit cards that use computer chips and personal identification numbers rather than magnetic strips.

That upgrade also included a $459,000 electronic guidance system for the airport's parking deck. The SmartPark system lets drivers know which parking spaces are available, making it quicker and easier to access the deck's 851 spaces.

Parking fees represent the airport's single largest source of revenue. Through the first nine months of 2019, the airport collected $7,681,503 in revenue from the airport's 3,500 parking spaces.