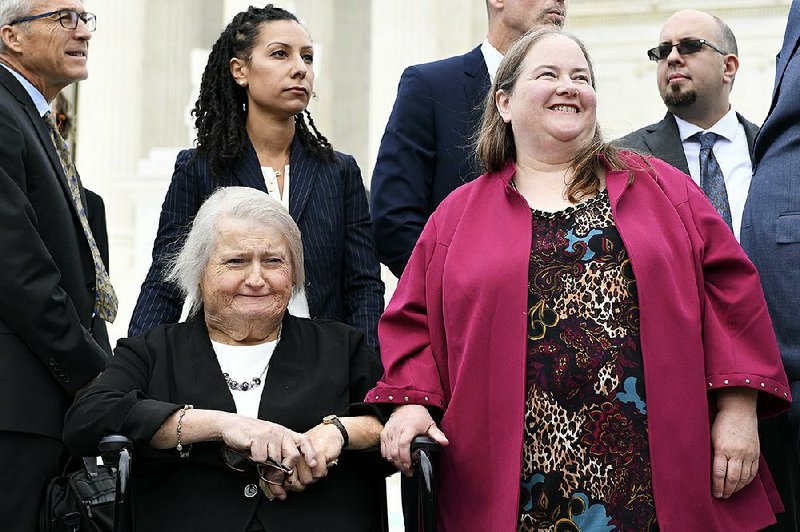 Aimee Stephens (front left), a transgender woman who was fired from her job as a funeral home director, and her wife, Donna Stephens, attend a news conference Tuesday outside the Supreme Court in Washington. More photos are available at arkansasonline.com/109court/

WASHINGTON -- The Supreme Court heard arguments Tuesday over whether a landmark civil-rights law protects gay and transgender people from discrimination in employment, with one conservative justice wondering if the court should take heed of "massive social upheaval" that could follow a ruling in their favor.

Two hours of lively arguments touched on sex-specific bathrooms, locker rooms and dress codes, and even a reference to the androgynous character known simply as Pat on Saturday Night Live in the early 1990s.

A key provision of the Civil Rights Act of 1964 known as Title 7 bars job discrimination because of sex, among other reasons. In recent years, some courts have read that language to include discrimination against lesbian, gay, bisexual and transgender people as a subset of sex discrimination.

[Video not showing up above? Click here to watch ª https://www.youtube.com/watch?v=c9uSxLH127w]

He told an American Civil Liberties Union lawyer arguing in favor of a transgender woman who was fired: "I'm with you on the text."

But Gorsuch suggested that maybe Congress should change the law because of the upheaval that he said could ensue if the court ruled in favor of the workers. "It's a question of judicial modesty," Gorsuch said.

"There are transgender male lawyers in this courtroom following the male dress code and going to the men's room and the court's dress code and sex-segregated restrooms have not fallen," Cole said.

Two other conservatives, Chief Justice John Roberts and Justice Brett Kavanaugh, did not squarely indicate their views, although Roberts questioned how employers with religious objections to hiring gay and transgender people might be affected by the outcome.

The first of two cases involved a skydiving instructor and a county government worker in Georgia who were fired for being gay. The second case involves transgender people, and the audience in the courtroom included Stephens, transgender actor Laverne Cox and some people who had waited in line since the weekend for Tuesday's arguments.

The Trump administration and lawyers for the employers hit hard on the changes that might be required in bathrooms, locker rooms, women's shelters and school sports teams if the court were to rule that the Civil Rights Act of 1964 covers LGBT people. Lawmakers, not unelected judges, should change the law, they argued.

Gallery: Protesters at high court as it weighs LGBT rights

Justice Samuel Alito, a conservative, seemed to agree with that argument, saying Congress in 1964 did not envision covering sexual orientation or gender identity.

Alito pressed Pamela Karlan, the Stanford University law professor representing the gay employees, about whether an employer who refused to hire a qualified candidate who was gay without knowing the candidate's gender was guilty of sex discrimination.

"So this is Saturday Night Live Pat, as an example, right?" Karlan said.

Alito replied, "Well, I'm not familiar with that."

Karlan obliged. "You can never tell whether Pat is a man or a woman," she explained.

Karlan said repeatedly that such a case is merely hypothetical, but conceded it would not qualify as sex discrimination.

If the votes of some conservative justices seemed in doubt, the liberals' views were clear.

"And we can't deny that homosexuals are being fired merely for being who they are," Justice Sonia Sotomayor said. "At what point do we say we have to step in?"

Justice Ruth Bader Ginsburg pointed out that the term "sexual harassment" was unknown in 1964, but now is considered sex discrimination.

Information for this article was contributed by David G. Savage of the Los Angeles Times. 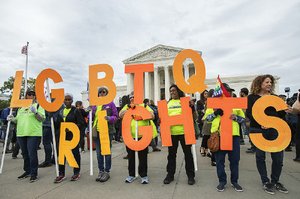