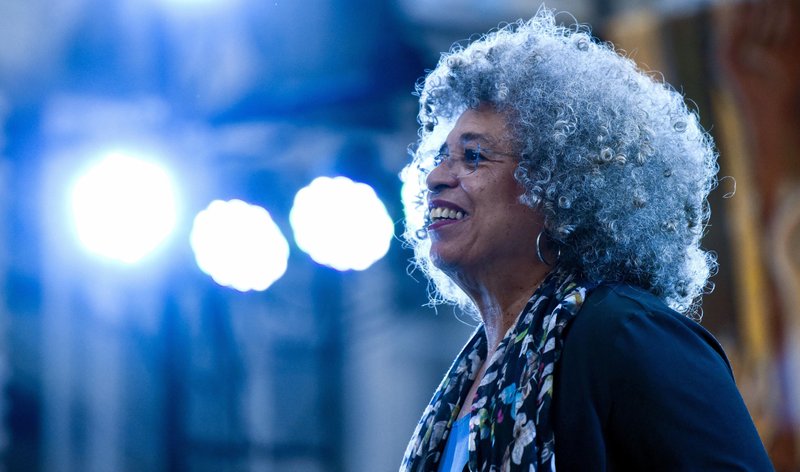 Political activist Angela Davis appears on the stage during an open air rally in front of the University of the Republic, in Montevideo, Uruguay, Saturday, March 23, 2019. Davis received a Honoris Causa Doctorate degree from the Uruguayan university.

Angela Davis, a professor and author who became known internationally during the 1970s for her political activism, said Tuesday morning at the Robinson Center that social justice can't be individualized and must be extended to all who are threatened.

"Philosophically you might say we are challenged to remember, always, that justice is nothing if it doesn't speak to all oppressions, discriminations and social pain in our world," Davis, a professor of history of consciousness and feminists studies at the University of California-Santa Cruz, told the crowd. "There is no effective struggle against gender oppression unless it's also linked to struggles against racial bias and capitalism.

"The theory of intersectionality is most viable when we apply it to struggle."

Davis, 75, covered a number of topics as the keynote speaker for Justice Con 2019, which brings together students, activists and renowned speakers to share ideas in the pursuit of social justice. The event was organized by the Social Justice Institute, a program at Philander Smith College that seeks to embrace work in social justice across multiple domains.

"It's especially important to engage in conversations about social justice and to strengthen our movement to forge justice and equality for all," Davis said.

Davis grew up in Birmingham, Ala., and emerged as an activist as a teenager in the 1960s when she organized interracial study groups that were broken up by the police.

She earned a master's degree from the University of California-San Diego, where in the late 1960s she joined multiple groups including the Black Panthers. She spent most of her time working with the Che-Lumumba Club, an all-black branch of the Communist Party USA.

Davis went on to become an assistant professor at University of California-Los Angeles, but after a year she was removed from the position because of her connections with the Black Panthers and the Communist Party USA. She eventually won her job back after a court battle.

"I would have to have police follow me to and from class, and when I was teaching, police would guard my car to make sure someone didn't put a bomb underneath it," Davis said.

After her dismissal from UCLA, Davis worked to free the Soledad Prison Brothers -- three black inmates who were charged in the killing of a white prison guard at the California prison -- and befriended one of the inmates, George Jackson.

In August 1970, Jackson and several other inmates attempted an escape from the Marin County Courthouse, during which a judge and three others were killed. Davis was put on the FBI's most-wanted list because of her association with Jackson -- even though she wasn't at the crime scene -- and was apprehended in New York.

After spending 18 months in jail, she was acquitted in 1972.

"I was scared, but I learned that fear doesn't have to be a deterrent to activism," Davis said. "If I was killed, at least my life had meaning."

Davis said Tuesday that mass incarceration, de-industrialization of the economy, the health care industry, and even Little Rock's education system were examples of racial biases that are being passed down under the guise of capitalism.

"Racism is continued to be transmitted in the economic structures, in the education structures, and I hear you are having a problem right here in Little Rock with the school districts with a kind of re-segregation of schools, am I right?" said Davis, drawing screams of "Yes!" from the crowd. "This is just another example of how racism has been not only produced and reproduced, but also reinvented under conditions of capitalism. ... I will be looking at Little Rock, and I see your struggles for a unified school district."

Davis also said education should be free for all.

"Amazing that we think of education as a commodity and not as a right," she said.

She also cautioned against the immediate celebration of diversity, saying it doesn't necessarily mean social justice has been achieved.

"We are always ready to celebrate the achievements of people of color or women without taking into consideration that diversity by itself may simply mean that previously marginalized individuals have been recruited to guarantee a more efficient operation of oppressive systems," Davis said. "I am not saying I am opposed to diversity, but I am saying that I am opposed to diversity without justice."

University of Arkansas at Little Rock student Nia Myton asked Davis what solutions and programs Davis would support. Myton said she is tired of organizations talking but not getting anything done.

"It's important to keep that sense of urgency, but change does take time," Davis said. "Talking is good, and sometimes talking can be action."

She suggested that Myton get involved in the community and in organizations.

"The thing that stood out to me was that nothing has changed," Myton said after the lecture. "We are still facing racism. ... Talking is good, but what are we building together? I was disappointed [Davis] didn't talk more about solutions, but I am glad she is looking at Little Rock at this time."

Davis said the youth are the future of the movement that she and others started.

"The young people are the hope, the young people who are fighting against racism and standing up against global warming," Davis said. "It's up to us that are not young any longer to follow their leadership."