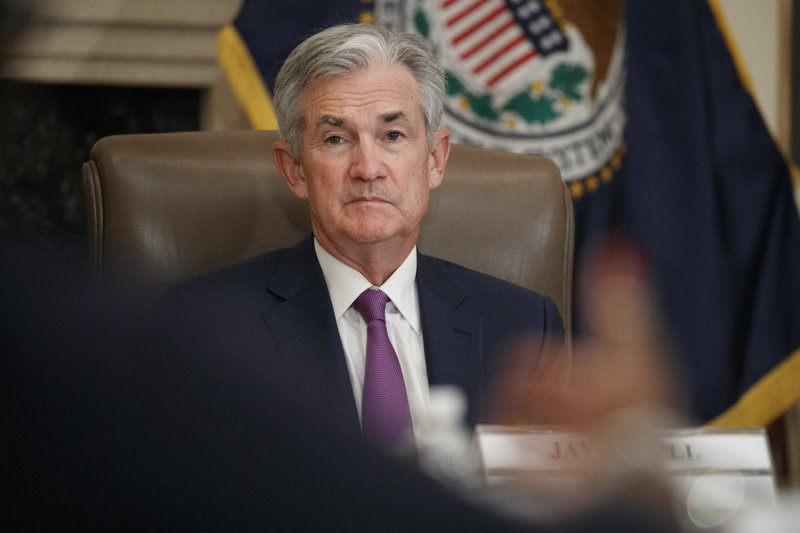 In this Oct. 4, 2019, file photo Federal Reserve Chairman Jerome Powell listens to feedback during a panel at the Federal Reserve Board Building in Washington. (AP Photo/Jacquelyn Martin, File)

WASHINGTON -- Federal Reserve Chairman Jerome Powell said Tuesday that U.S. job growth since early last year was not as robust as thought, a hint that the Fed may be ready to keep cutting interest rates to support the economy.

"Where we had seen a booming job market, we now see more-moderate growth," Powell said in a speech at an economic conference in Denver.

The Fed raised its benchmark short-term rate four times last year, ending at a range of 2.25% to 2.5%. The reasoning behind these rate increases was based in part on the notion that brisk hiring would enable workers to secure higher pay, which would ultimately lead to higher inflation. Yet so far, the pace of income gains and price increases has remained slight.

[Video not showing up above? Click here to watch » https://www.youtube.com/watch?v=2oF4EZ4QdOs]

Since the start of this year, the Fed has reversed two of those increases, and investors expect a third rate cut late this month, according to market gauges.

In his speech, Powell also said the Fed plans to renew its Treasury security purchases to pump more cash into overnight money markets. That step is intended to help keep short-term rates at their target level and isn't needed to support the economy, the Fed chairman added.

Powell stressed the buying should not be seen as a return of the crisis-era quantitative easing programs that the Fed engaged in a decade ago to boost the economy. Three-month bill yields fell on the comments, while U.S. stocks pared losses and the dollar was higher.

"I want to emphasize that growth of our balance sheet for reserve management purposes should in no way be confused with the large-scale asset purchase programs that we deployed after the financial crisis," he said. "Neither the recent technical issues nor the purchases of Treasury bills we are contemplating to resolve them should materially affect the stance of monetary policy."

Last month, a shortage of funds in the overnight lending markets used mostly by banks lifted the Fed's rate above the top of its target range. Corporate tax payments due at the end of the quarter and bond sales by the federal government had soaked up enough cash to send the overnight rates sharply higher.

In his remarks Tuesday, Powell did not directly address the Fed's next steps on interest rates. But he said the central bank "will act as appropriate" to support the economy and hiring.

The economy has recently shown signs of slowing as weakness overseas has spread to the U.S. and moved from domestic manufacturing industries to services.

"The decision to begin expanding the balance sheet again is about as clear a statement as possible that the Fed wants to make certain they do not inadvertently trigger a recession," said Mark Vitner, senior economist at Wells Fargo & Co., who attended the speech.

The job market has also downshifted, even as unemployment has fallen to a half-century low of 3.5%. Non-farm payrolls grew by an average of 157,000 per month in the third quarter, compared with gains above 200,000 earlier in the expansion.

"At present, the jobs and inflation pictures are favorable," he said. "But there are risks to this favorable outlook," he added, referring specifically to the U.S.-China trade war and Brexit. Major overseas economies, such as Germany, are also stumbling.

Information for this article was contributed by Christopher Rugaber of The Associated Press; and by Rich Miller and Steve Matthews of Bloomberg News.