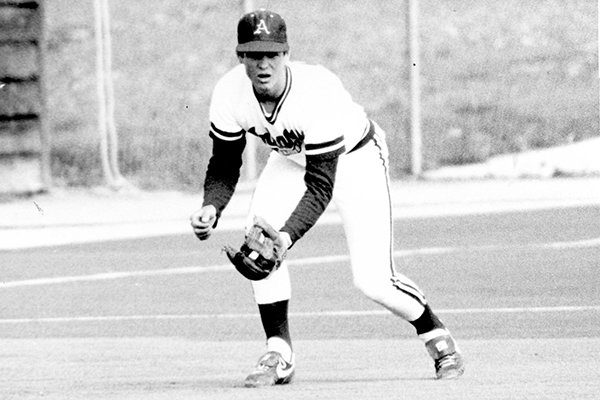 Arkansas third baseman Jeff King is shown during his playing days in the 1980s. King, who was the Razorbacks' first play selected first overall in the MLB Draft, will be inducted into the Southwest Conference Hall of Fame in November 2019. - Photo by Arkansas Razorbacks

King will be inducted with eight other individuals during a luncheon on Nov. 18 at the Brown-Lupton University Union on the TCU campus in Fort Worth, Texas.

King played third base for the Razorbacks from 1984-86. He was voted to All-America teams all three seasons and to the All-Southwest Conference team as a sophomore and junior.

His 82 RBI in 1985 are the single-season school record and his .372 career batting average ranks third at Arkansas.

In 1986, King was selected first overall in the MLB Draft by the Pittsburgh Pirates — the only No. 1 selection in Razorbacks history. He played 11 MLB seasons combined for the Pirates and Kansas City Royals.

A separate panel has selected a large class of Arkansas athletes and coaches each year since 2013 in an attempt to populate the museum with more Razorbacks. Nine former Arkansas players or coaches will be inducted into the SWC Hall of Fame during a banquet in Little Rock on Nov. 11.