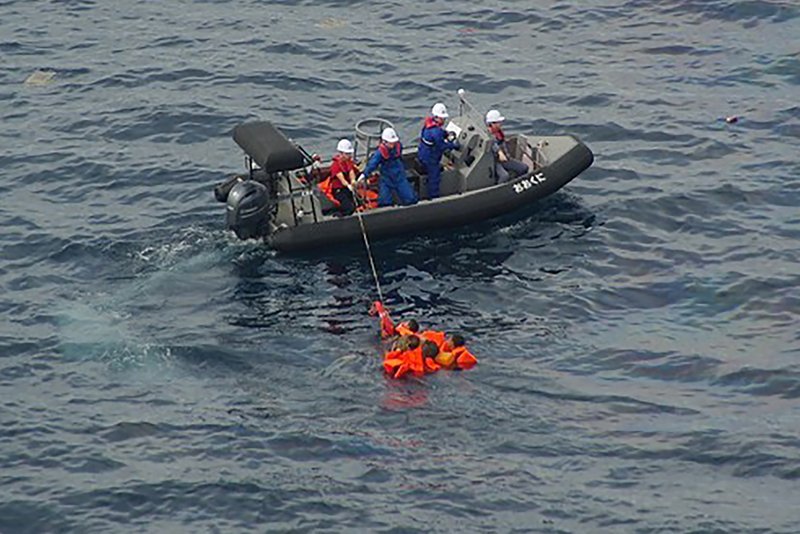 In this Monday, Oct. 7, 2019, photo released by the 9th Regional Japan Coast Guard Headquarters, crew of a Japanese Fisheries Agency patrol vessel work to rescue North Korean fishermen off the northwestern coast of the Noto Peninsula, Ishikawa prefecture, Japan. Japanese authorities said they rescued all of about 60 North Korean fishermen whose boat collided with a Japanese patrol vessel and sank Monday in an area crowded with poachers. (The 9th Regional Japan Coast Guard Headquarters via AP)

TOKYO -- Japanese Prime Minister Shinzo Abe said Tuesday that Tokyo has lodged a protest with Pyongyang over a collision between a North Korean fishing boat that illegally entered Japan's exclusive economic zone and a Japanese patrol boat, pledging to step up measures against foreign poachers.

Japanese authorities on Monday rescued about 60 North Korean fishermen who were thrown to the sea after their ship collided with a Japanese Fisheries Agency inspection vessel and sank in the economic zone off the country's northern coast.

Abe told parliament Tuesday that the authorities helped the fishermen onto another North Korean ship and let them go rather than arrest them on criminal charges because evidence of illegal fishing was lacking.

But Abe said that doesn't mean Japan is looking the other way.

"The government of Japan will continue to respond resolutely to prevent illegal operations by foreign fishing boats inside of our exclusive economic zone," he said, adding that Tokyo protested to Pyongyang through a diplomatic channel in Beijing.

Japan and North Korea have no diplomatic ties. The two countries have disputes over Japan's 1910-1945 colonial rule of the Korean Peninsula, as well as North Korea's nuclear and missile development and its abduction of Japanese citizens in the 1970s and 1980s. Abe has been pushing for his first summit with North Korean leader Kim Jong Un to resolve the abduction issue.

MILAN -- An administrative court in Venice decided Tuesday to temporarily suspend the loan of Leonardo da Vinci's Vitruvian Man to the Louvre in Paris for an exhibition that is set to open later this month.

The move followed a request by the nonprofit group Italia Nostra, which has been protesting the loan of the famed drawing by the Renaissance master from Venice's Accademia Gallery.

A final decision is set for Oct. 16, just days before the exhibition marking the 500th anniversary of da Vinci's death is set to open at the Louvre on Oct. 24.

Italia Nostra, which campaigns for the protection of Italy's cultural treasures, argued that such a "precious and fragile" masterpiece should not leave Italy.

Culture Minister Dario Franceschini signed a memorandum in September securing the loan in exchange for a work by Raphael for an exhibition marking the 500th anniversary of his death next year in Rome.

Vitruvian Man, da Vinci's famed study of human proportions, is normally kept out of public view in climate-controlled conditions, but was exhibited at the Accademia Gallery from April through July as part of events marking the anniversary of his death.

KIGALI, Rwanda -- A state-run Rwandan newspaper reported that the country has deported an American pastor who was arrested and accused of disturbing the public order.

The New Times on Tuesday cited immigration authorities as saying conservative missionary Gregg Schoof had overstayed his work permit. Police had arrested him for what they called an illegal meeting with journalists to criticize the government's shutdown of his radio station.

That Amazing Grace radio station was banned last year after authorities said it broadcast a sermon that described women as evil.

The New Times report said Schoof in a statement on Monday criticized Rwanda authorities for loosening restrictions on abortion and teaching about reproductive health in schools.

"Is this government trying to send people to hell?" the statement asked.

Afghanistan's national security agency said in a statement Tuesday that the raid on Sept. 23 killed Asim Omar along with six other al-Qaida members in the southern Helmand province.

Omar was the head of al-Qaida operations in South Asia.

Among those killed was Raihan, Omar's courier to Ayman al-Zawahiri, the leader of the al-Qaida network, the statement added.

"They had been embedded inside the Taliban compound in the Taliban stronghold of Musa Qala," added the Afghan intelligence services' statement.

The joint U.S.-Afghan operation targeted a Taliban hideout in the Musa Qala district, but the civilian deaths it caused rattled Afghanistan.

At least 40 people attending a wedding party were killed on the same day, according to provincial officials, in the U.S. airstrikes.

Abdul Majed Akhund, deputy provincial councilman in Helmand, had said that most of the dead were women and children. An additional 12 civilians were wounded and were hospitalized in Lashkar Gah, the capital of Helmand province.