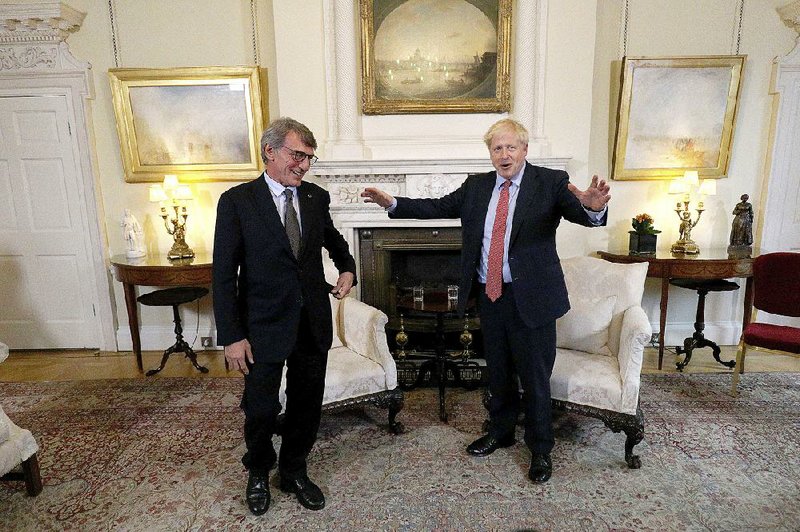 British Prime Minister Boris Johnson (right) talks with David Sassoli, the president of the European Parliament, ahead of a private meeting Tuesday at No. 10 Downing St. in London. More photos are available at arkansasonline.com/109johnson/

LONDON -- The prospect of a Brexit deal between Britain and the European Union appeared fainter than ever Tuesday after an early-morning phone call between Prime Minister Boris Johnson of Britain and Chancellor Angela Merkel of Germany underscored the deep differences between the two sides.

Johnson has insisted that Britain will leave at the end of the month, with or without an agreement, but another delay would buy time for a general election in Britain and avoid the risk of a no-deal Brexit in just a few weeks' time.

The phone call with Merkel on Tuesday appeared to dash whatever limited hope remained of an agreement before Oct. 31, after the German chancellor made clear in the talks Tuesday that she could not agree to central elements of proposals made by Johnson last week, according to reports in the British news media.

In a statement to British media, Downing Street said Merkel had told Johnson that "a deal is overwhelmingly unlikely" unless the U.K. agreed to let Northern Ireland continue to follow EU customs rules in order to maintain an open border with EU member Ireland.

[Video not showing up above? Click here to watch ª https://www.youtube.com/watch?v=hpQjmMKVVt4]

That is something the British government says it can't accept. Downing Street said that "if this represents a new established position, then it means a deal is essentially impossible not just now but ever."

How people and goods will move across the Irish border is the main sticking point to a deal.

The German government confirmed that Merkel and Johnson had spoken but declined to comment on the substance of "confidential conversations."

European Commission spokeswoman Mina Andreeva said "the EU position has not changed. We want a deal. We are working for a deal with the U.K."

"At stake is the future of Europe and the UK as well as the security and interests of our people," he said, addressing Johnson. "You don't want a deal, you don't want an extension, you don't want to revoke, quo vadis?" -- a Latin phrase meaning "where are you going?"

Despite the grim mood, British officials insisted they still hope to strike a deal before Britain's scheduled departure date.

"We've moved -- it is now time for the EU to move, too," said Michael Gove, the minister in charge of Brexit preparations. "If it does, then there is still every chance we can leave with a new deal."

Johnson has pledged to leave the European Union at the end of the month, "come what may," but a law recently passed by Parliament requires him to request a third Brexit extension if he fails to reach an agreement that has the approval of both the European Union and the British Parliament.

Though British lawmakers have three times voted against a Brexit deal, most of them oppose a no-deal Brexit because of the widely held belief that it would be economically disastrous for the country.

The British government outlined its latest preparations for that scenario Tuesday, amid warnings that leaving without an agreement could come with a potentially heavy cost to public finances, and to businesses that would face new administrative burdens.

According to British officials, Merkel outlined serious objections to Johnson's proposals on how to prevent checks on goods on the border between Northern Ireland, part of the United Kingdom, and Ireland, which will remain part of the European Union.

Johnson has proposed keeping Northern Ireland largely under many of the EU's rules for agriculture, and for product and environmental standards for goods, so long as Northern Irish political parties back such an approach.

But Johnson wants to take Northern Ireland, along with the rest of the United Kingdom, out of the EU's trading and customs system. He argues that, while some customs checks will be necessary, they can be minimized and take place well away from the border.

That notion has been rejected by the Irish government in Dublin, and it also proved to be a sticking point for Merkel, according to British officials.

Downing Street said Tuesday that the only alternative the European Union had suggested to Johnson's proposal was the so-called Irish backstop plan rejected three times by Britain's Parliament. That would require Northern Ireland to stay in Europe's customs union, perhaps indefinitely.

Opposition parties in Britain criticized the latest statements from Downing Street, accusing officials there of trying to mask what they said was Johnson's desire for a no-deal Brexit.

"Boris Johnson will never take responsibility for his own failure to put forward a credible deal," said Keir Starmer, who speaks for the opposition Labor Party on Brexit. "His strategy from day one has been for a no-deal Brexit."

Information for this article was contributed by Stephen Castle of The New York Times; and by Jill Lawless, Raf Casert and Geir Moulson of The Associated Press. 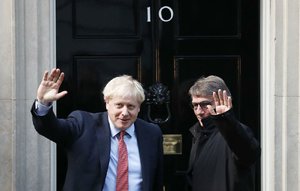 Photo by AP/FRANK AUGSTEIN
Britain’s Prime Minister Boris Johnson (left) welcomes European Parliament President David Sassoli at No. 10 Downing St. on Tuesday in London. The prospect of an exit deal between Britain and the EU appeared to grow even fainter Tuesday. More photos are available at arkansasonline.com/109johnson