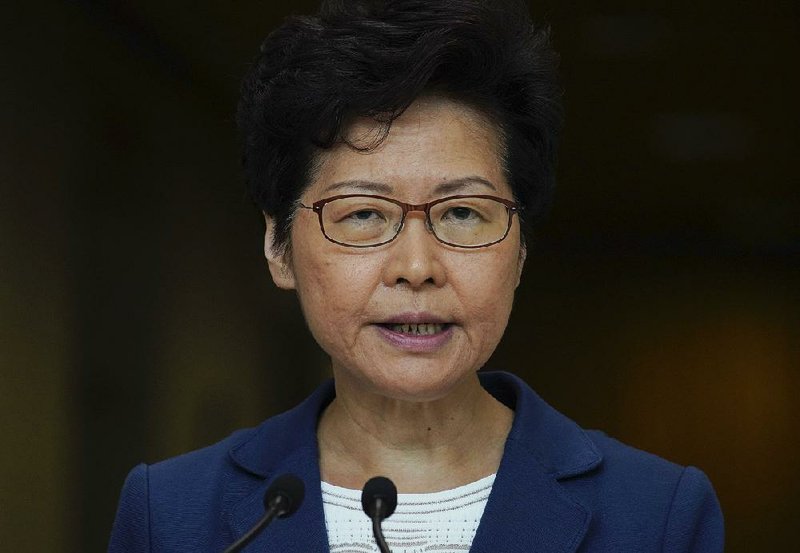 Hong Kong Chief Executive Carrie Lam pledged support to industries affected by the protests and did not rule out the possibility of further measures to address the city’s unrest. More photos are available at arkansasonline.com/109hongkong/

She said seeking Chinese intervention was provided for under Hong Kong's constitution but that she cannot reveal under what circumstances she would do so.

"I still strongly feel that we should find the solutions ourselves. That is also the position of the central government, that Hong Kong should tackle the problem on her own, but if the situation becomes so bad, then no options could be ruled out if we want Hong Kong to at least have another chance," she said at a news conference.

Lam condemned the weekend's violence and attacks on businesses, after demonstrators vandalized shops and paralyzed the city's transit system in some of the worst violence of the past four months. The chaos followed Lam's decision to ban protesters from wearing masks under the colonial-era Emergency Regulations Ordinance that could also be used to detain and arrest protesters and censor publications.

[Video not showing up above? Click here to watch ª https://www.youtube.com/watch?v=a0p_wtuCS6U]

The protests started in June over a now-shelved extradition bill that would have allowed some criminal suspects to be sent to mainland China for trial but have since morphed into a larger anti-government movement. Protesters say the bill is an example of Beijing's increasing influence over the former British colony, which was promised a high level of autonomy when it returned to Chinese rule in 1997.

The unrest has pummeled tourism and hurt businesses in the global financial hub.

Lam pledged support to affected industries and called for developers and store owners to provide relief. She didn't rule out the possibility of further measures under the emergency law, which was last used more than a half century ago to put down leftist riots, to address "such a changing situation."

"What I can assure you is the government will take a very serious view and very careful assessment before the ERO is to be invoked again," Lam said.

U.S. President Donald Trump on Monday urged Chinese President Xi Jinping to ensure a "humane solution" in Hong Kong. He warned that any "bad" outcome could hurt trade talks, which are set to resume in Washington on Thursday.

He said that included 77 who violated the mask ban. Fourteen of them were charged Tuesday, he said, bringing the total number of prosecutions to 16.

The mask ban is punishable by up to a year in jail and a fine.

Since June, 2,363 people have been arrested, with more than 200 charged with rioting.

Meanwhile, medical professionals who call themselves the Hidden Clinic have quietly banded together to secretly treat the injuries of many young demonstrators who fear arrest if they go to government hospitals.

The Hidden Clinic says it has clandestinely treated 300-400 protesters with an array of injuries: broken and dislocated bones, gaping wounds and exposure to tear gas so prolonged that they were coughing up blood. It also says the severity of the injuries has increased sharply in the past week, with hard-core protesters and police increasingly tough on each other.

A practitioner who specializes in traditional Chinese medicine and is not affiliated with Hidden Clinic says she alone has treated 60-80 patients, some with multiple wounds from tear-gas canisters and other riot-control projectiles.

The woman, who spoke on condition of anonymity because she fears reprisal during her frequent trips to the mainland, uses acupuncture to ease their pain and doesn't charge for her services.

This behind-the-scenes doctoring, outside of government hospitals, suggests that the official toll of 1,235 injured protesters treated in public hospitals since June 9 significantly undercounts both the number and full extent of those hurt in the more than 400 demonstrations tallied by the government.

The government tally, compiled by the Hospital Authority, only counts patients who visited 18 public Accident and Emergency departments in the territory of 7.5 million people, not those treated privately.

"These kids are striving for a whole era's freedom," said a Chinese medicine practitioner who devotes one evening per week to treating protesters, seeing as many as a dozen each time. "For those of us who don't dare go out, the very least we can do is treat their wounds."

Information for this article was contributed by John Leicester and Eileen Ng of The Associated Press; and by Iain Marlow and Shawna Kwan of Bloomberg News.