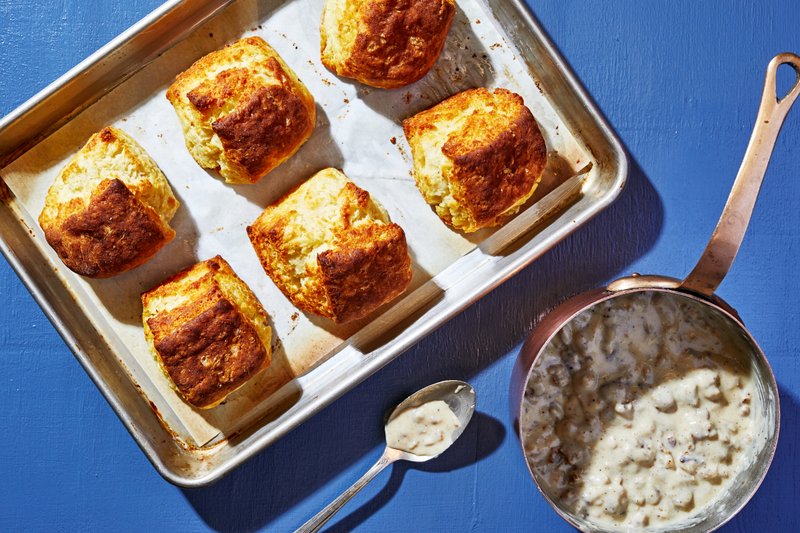 Read the words "biscuits and gravy," and an image of flaky, buttery biscuits topped with a decadent, sausage-studded cream gravy comes to mind. You can find some version of the dish served in diners and cafes, food trucks, fast-food outlets and even white-tablecloth restaurants the nation over — not just in the South, its birthplace. If you have any doubts about the dish's ubiquity, just look in the frozen foods aisle of your local grocery store.

The indulgent meal, beloved by people from all walks of life, is now ingrained in the fabric of America's breakfast and brunch culture. But its origins were decidedly modest.

Biscuits and gravy in some form may go back as early as the Revolutionary War, but many food writers and culinary historians position its birthplace in southern Appalachia in the late 1800s. Lumber was one of the main industries of the region, which supports the origin story that gave sausage gravy its other name — sawmill gravy. It was the ideal cheap and calorie-dense fuel for sawmill workers lifting heavy logs all day long, and the perfect tool for making the era's biscuits more palatable.

America's first biscuits were much sturdier than today's delicate specimens. Called "beaten biscuits," they got their leavening and smooth texture from being vigorously beaten and folded, according to John Egerton in Southern Food: At Home, On the Road, In History.

Making beaten biscuits was often the duty of enslaved cooks or domestic servants and could take well over an hour. Once the free labor was no longer technically allowed via the ratification of the 13th Amendment, the process "had come to be viewed as too burdensome," Egerton writes.

A machine invented in 1877 "not only saved beaten biscuits from extinction but actually made them smoother, prettier, and more popular than before."

Around the same time, baking powder and soda became commercially available. Combine this with the increased availability of flour, and the South became fertile ground for a new version of the biscuit to take root, giving cornbread a run for its money as the reigning quick bread of the region.

Why did sausage gravy become their de facto companion? It was a simple matter of economics. "Biscuits with 'country' or 'white' gravy scratched together from sausage, pan drippings, flour, and milk were affordably made from the foodstuffs that were in low supply after the American Revolutionary War," writes Heather Arndt Anderson in Breakfast: A History.

When it entered the culinary canon, biscuits and gravy was for the poor, working class. "Pork was always the protein of the poor," Arndt Anderson said in an email. "Sausage releases so much fat when cooked that a roux comes together easily in the drippings."

Yet for some, such as my own grandmother, even sausage and dairy were out of reach at times.

Born in 1928 in tiny Rondo, Ark., my grandmother and her family lived on a farm among fields of cotton and other crops. As customary for many farmers, their livelihood oscillated with the success of each harvest, resulting in either "fat" or "lean" times, as she put it. Regardless of where they found themselves on the pendulum of prosperity, biscuits were almost always on the breakfast table.

In a family of about 10, "Being the oldest daughter, it was my plight to get up and make biscuits if Mama didn't do it," she tells me. She would form a well in a mound of flour, baking powder and salt and add liquid to form a dough, which she kneaded, rolled out, cut and baked into the morning's rations. Depending largely on whether they had a cow that recently birthed a calf (or a generous neighbor willing to share), the liquid was either milk or water.

"It was a treat for us to have biscuits with syrup and butter," she said. The syrup came from the sorghum on their land, and the butter depended on the availability of dairy and the time of the year.

"Southern women made such an issue about baking cakes for holidays like Thanksgiving and Christmas, they'd save the butter," she says. In the good times, ham and occasionally rice would make an appearance. But during the lean times, breakfast consisted of just biscuits and "thick gravy" — water thickened by a brown roux of oil and flour. No sausage, and no cream.

As Sara Roahen and John T. Edge write in The Southern Foodways Alliance Community Cookbook, "The Southern way with gravies was born of privation. ... And when folks are poor, folks make do. Which means folks make gravy."

The South is home to many gravies, and virtually any of them could be served with biscuits. Appalachian food authority Ronni Lundy talks of chipped beef and gravy and tomato gravy in her cookbook Victuals. The Southern Foodways Alliance Community Cookbook includes recipes for Mississippi Chennai okra gravy, oyster gravy, Roan Mountain corn gravy and chocolate gravy.

Nicole Taylor, executive food editor at Thrillist, recalls first experiencing biscuits and gravy in her hometown of Athens, Ga., at the now-closed Katherine's Kitchen, where her mother worked. "Biscuits were a treat," Taylor says, and she ate them with ham steak and red-eye gravy, traditionally made from ham drippings and coffee.

Erika Council, esteemed biscuit queen and granddaughter of famous North Carolina restaurateur Mildred "Mama Dip" Council, on the other hand, says the gravy she ate with biscuits was of the sausage variety. ("North Carolina, home of Niece Sausage," she says.) Biscuits and gravy has been served over the years at her family's revered Charlotte, N.C., restaurant and is one of the best-selling items at her biscuit pop-ups in Atlanta. "The sausage gravy [is] ... definitely requested often when we cater," she says.

Though biscuits and gravy started out as a humble regional dish, its presence has spread far and wide. In addition to human migration, the invention of refrigerated tube biscuits in 1930 made biscuits and gravy easier to prepare at home. Eventually, the dish even took root on restaurant menus as far away as the Pacific Northwest.

"As a staple of the poor, biscuits and gravy would never have appeared on fancy restaurant or hotel menus in Portland's past," Arndt Anderson wrote in an article for Portland Monthly. "By the early 1980s, though, seemingly out of nowhere, spots around town began casually advertising the B&G, as though it had always held the same breakfast menu real estate as bacon and eggs."

Cookbooks soon followed suit. In Southern Food, published in 1987, Egerton writes about country gravy that "it is rare to find in any cookbook a recipe for this quite common and popular companion to hot biscuits," but that is now no longer the case. The Joy of Cooking, which I view as the chronicle of American cooking, included a recipe in its 2006 edition.

Today, you can find it just about anywhere. With the handle biscuits_and_gravy, George Drake Jr. has even dedicated an Instagram account to his encounters with the dish. (His favorite is from Loveless Cafe in Nashville, Tenn.) "It has such a tradition, and you can have as much fun with it as you want," said Drake, a freelance radio producer in Dayton, Ohio. That means biscuits and lamb gravy at the Greek Street Dayton food truck; fried chicken, bacon and cheese on a biscuit topped with gravy from Pine State Biscuits in Portland, Ore.; and a dish called Fantasy Island at Leo's Diner in Omaha, Neb. The latter includes hash browns topped with biscuits and gravy, two eggs, bacon, sausage, ham, green pepper, onion and tomato. Vegetarian and vegan versions abound, too.

Like lobster in years gone by or the chopped cheese sandwich more recently, biscuits and gravy has seen a rebranding, crossing geographic and cultural boundaries.

Asked why the dish has achieved such celebrity status among its fellow breakfast options, Drake has a theory: "I think it just appeals to so many people," he says. "Way more than just pancakes."

Here, fluffy buttermilk biscuits are topped with a sausage-studded creamy gravy fortified with black pepper. Baking the biscuits spaced out on a baking sheet leads to a crispy exterior, giving a nice textural contrast to complement the luscious gravy, but you can also nestle the biscuits together in a baking dish for a more pillowy result. 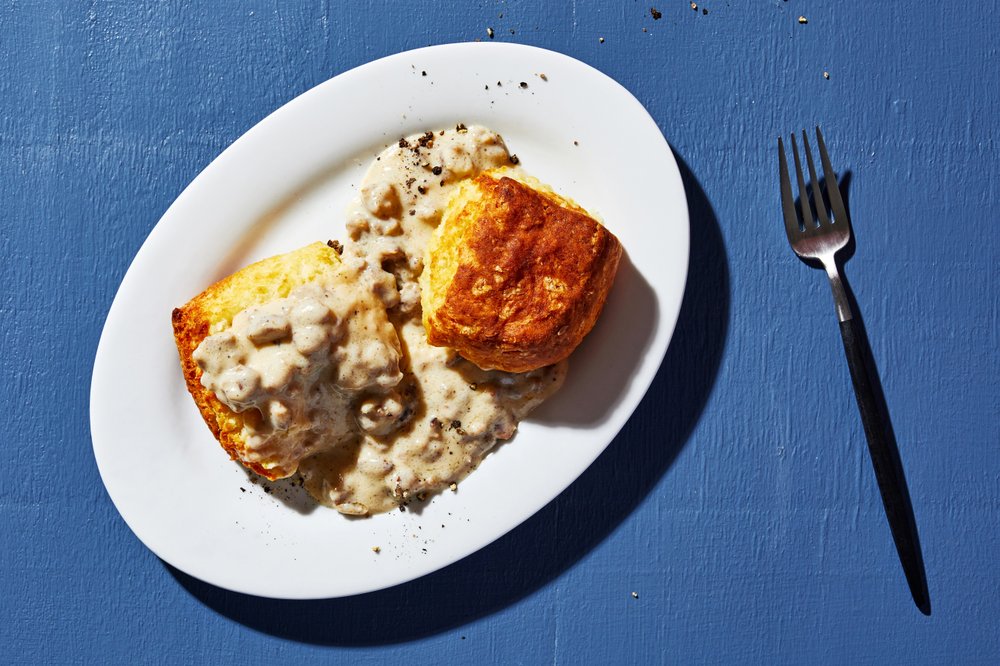 The likely birthplace of biscuits and gravy is southern Appalachia in the late 1800s, many food writers and culinary historians say. Photo by Stacy Zarin Goldberg for The Washington Post

The gravy itself is extremely easy to prepare and comes together in the time it takes for the biscuits to bake in the oven. Make your morning extra decadent by topping your biscuits and gravy with sunny-side-up eggs.

One of the best things about this savory recipe is that it makes a non-crowd-size amount.

The gravy can be refrigerated a day in advance. Reheat over low heat; you may need to add more whole milk to loosen it up.

1 ½ cups flour, plus more for dusting

For the biscuits: Whisk together the flour, baking powder, sugar, salt and baking soda in a mixing bowl, to blend well. Add the cubed butter to the flour mixture; use a food processor, pastry cutter, two forks or your clean hands to quickly work in the butter, just until the largest pieces are pea-size.

Pour in the buttermilk, processing or stirring until a dough begins to form; if you are stirring by hand, there will still be dry bits.

Lightly flour your work surface. Turn out the dough there, and pat it into a rough rectangle. Roll it out slightly and fold it over on itself a couple of times. Form into a 4-by-6-inch rectangle that's ¾- to 1-inch thick (try to square up the corners as much as possible), then cut it into 6 squares of equal size (about 2 inches each).

Line a quarter baking sheet with parchment paper. Arrange the biscuits on it, spacing them at least an inch apart. Freeze (on the sheet) for 15 minutes.

Transfer the biscuits on their baking sheet directly to the oven; bake (middle or lower rack) until golden brown on top and bottom, 15 to 17 minutes.

Meanwhile, make the gravy: Add pinches of the sausage to a large skillet; cook over medium heat, using a wooden spoon to further break them apart until only small pieces of sausage remain and it is no longer pink on the outside, 5 to 6 minutes.

Sprinkle with the flour and black pepper; cook, stirring regularly, until the flour has been completely absorbed by the sausage and it has started to brown, and the sausage crumbles are cooked all the way through, 3 to 4 minutes.

Gradually pour in the milk, stirring regularly, and adjust the heat as needed so the mixture is just bubbling at the edges; cook for 6 to 8 minutes, stirring often, until the gravy has thickened enough to coat the back of a spoon. You should have about 2 ½ cups of sausage gravy.

Taste, and add salt and/or more pepper, as needed. Serve warm, spooned over the biscuits.